Find out more
Home Updated numbers from our platform
Published on May 27th, 2014

CEO Simon Nelson shares an update on how people are using FutureLearn, based on the first 21 courses to run on the social learning platform in 2014.

In February we shared our first set of numbers based on the first eight courses to run on FutureLearn. We put a lot of thought in what information it would be useful for us to share on a regular basis, to give the simplest and most meaningful illustration of our approach to delivering social learning at scale. This gave us an important set of measures against which to judge our original aim of creating an intuitive and enjoyable education platform that supports a  community of people learning through conversation.

We’ve now updated our illustration of those measures to show data  from the first 21 courses to run in 2014, and the results from those 21 courses, we’re pleased to say, are really positive. 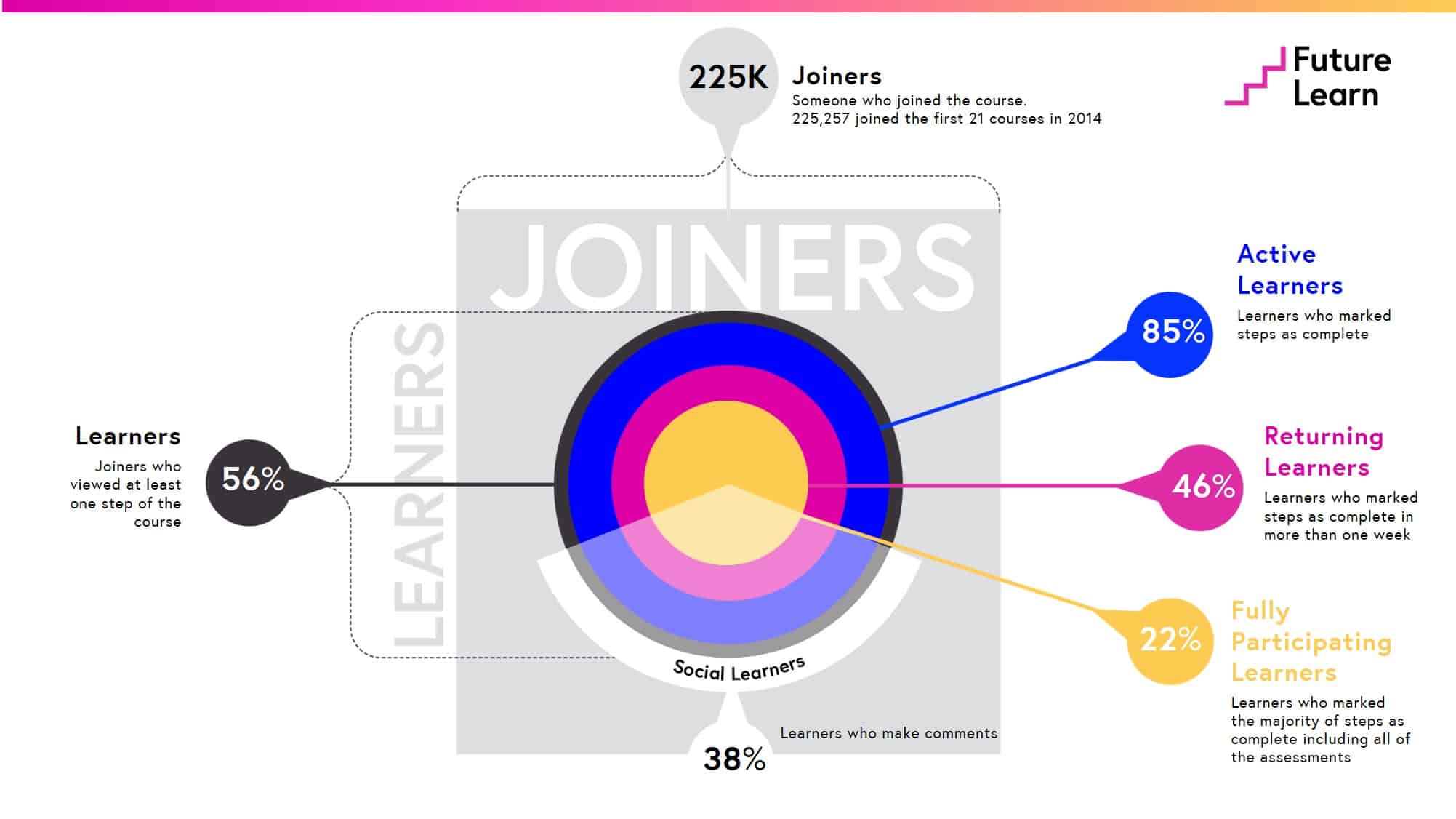 Almost a quarter (22%) of all learners are fully participating in the courses, which is a great reflection of how well we are motivating people to progress through the courses. We set ourselves a comparatively high bar for ‘full participation’, making our Statements of Participation only available to learners who complete the majority of steps in a course as well as all the  assessments. The proportion of learners qualifying for those statements has grown since February when we reported 15%.

We’re also pleased to see an increase in the number of learners having conversations around the course content. 38% are leaving comments which themselves become a valuable source of learning material for others reading them. Close to a million comments have been made on FutureLearn. Learners can ‘like’ comments and filter threads to better follow discussions, and we’re doing more work to help learners talk to one another.

Our number of active learners, those marking course steps as complete, remains very high at 85%.

Unlike many other platforms, we still have a high number of female learners (nearly 60%) and continue to have a very even distribution of ages, although the proportion of our learners under 35 has increased a little to just over a third.

Pre- and post-course surveys also show us that we’re introducing online learning to a significant number of learners around the world – 56% of learners hadn’t taken an online course before their experience of FutureLearn. We are also providing a valuable channel for people who might not previously had an opportunity to study with world class universities, as we see from the 24% of learners who don’t have degrees. We’re equally pleased to see that FutureLearn is reopening learning to many who thought quality higher education was  behind them, with a large proportion of learners identifying as being in either full time or part time work.

All in all, we’re really pleased with the way things are progressing and will continue to share numbers as we receive and examine more data from the courses.