Iceland is a Nordic island country located in the middle of the North Atlantic, which in the 1970s had a population of just over 200,000. Nowadays more than 300,000 people live in the country. Iceland is known as the first nation in the world to elect a female president, Vigdís Finnbogadóttir, who served as the leader of Iceland from 1980 to 1994. When Finnbogadóttir was elected president she credited the Icelandic Women’s Strike of 1975 as having paved the way for her success:

It is important that we break new paths based upon our experience as women. I am president today as a result of the women’s strike in 1975, as a result of the great changes that have occurred in women’s position – and I am at the same time a part of this process of change.

The Icelandic Women’s Strike took place on 24th October 1975. The strike called for all women in Iceland to take the day off. The aim of the strike was to emphasise that women’s work was socially and economically indispensable yet often undervalued. Having originated as an idea among the Icelandic feminist movement known as the Redstocking or Rauðsokkahreyfingin in 1970, the Women’s Strike was organised five years later by women belonging to the country’s political parties, feminist and women’s movement groups, and professional women’s organisations. In the lead up to the protest women from these diverse backgrounds formed The Committee for the Women’s Day Off, which was responsible for carrying out the strike. 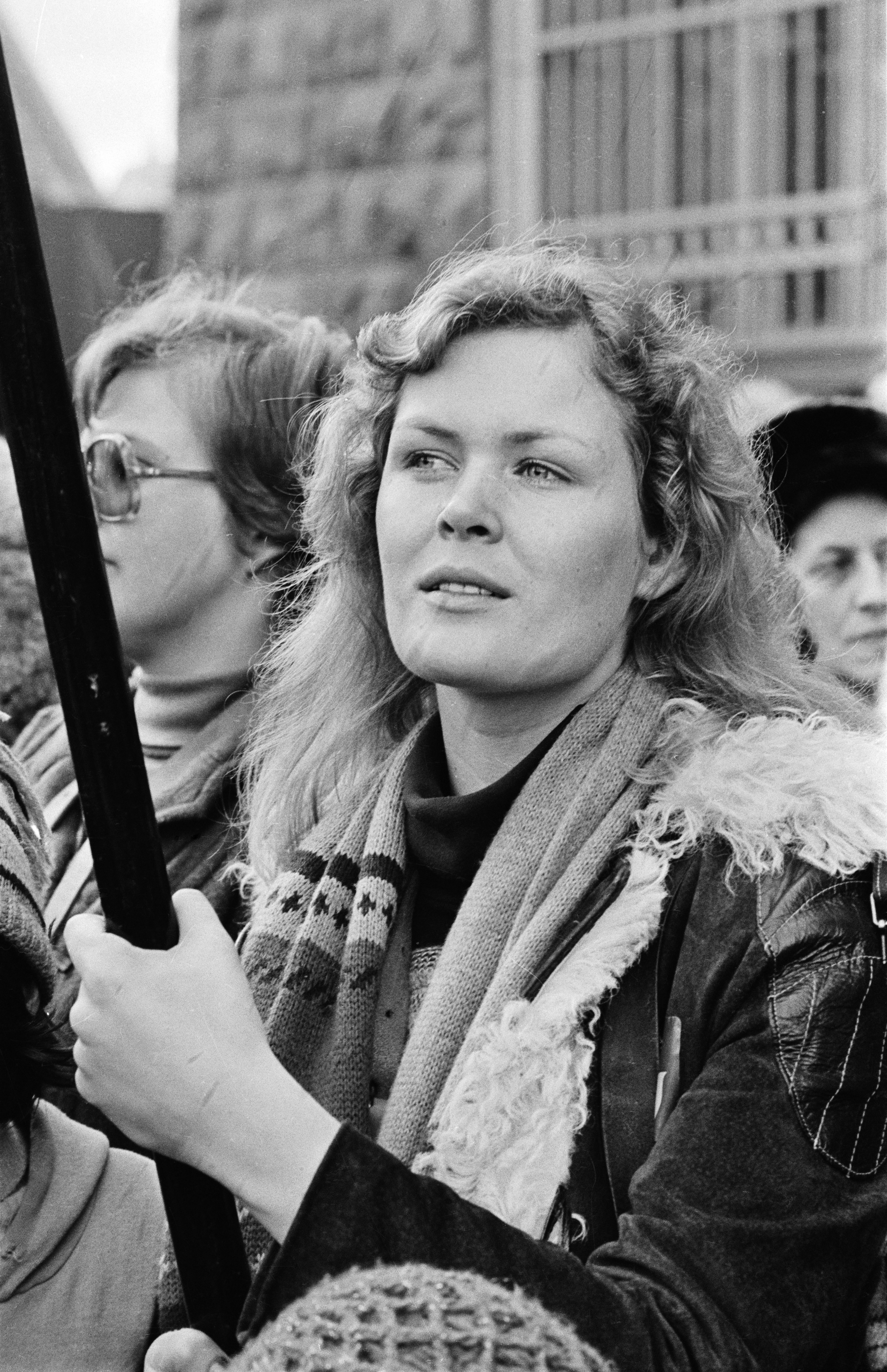 Photograph by Björgvin Pálsson. Courtesy of Reykjavik Museum of Photography.
The Committee drew up a list of demands touching on a range of issues. These included unfair gendered hiring practices, the lack of woman representatives in the Icelandic Trade Union Congress, and farmer’s wives not being accepted as full members of the Icelandic Farmer’s Union. The Committee also demanded that childcare be made more accessible and affordable, and that the work women did within the home be valued as part of the labour market. By the 1970s approximately half of working aged women in Iceland were gainfully employed in Iceland, however they faced significant wage disparity relative to men and had limited opportunities for advancement in the workplace.
The strike quickly gained international attention. On the day following the Women’s Strike, the U.S. newspaper The New York Times described the scenes in Iceland as follows:

The strike—which many Icelandic men treated as a joke when it was first suggested—was reported nearly 100 per cent effective. The biggest problem was communications, with telephone service at a virtual standstill. In addition, newspapers closed because the typesetters are women and theatres shut down because actresses wouldn’t work and many schoolchildren were left untaught since 65 per cent of the teachers are women. The national airline had to cancel flights for lack of stewardesses and banks managed to remain open only because executives staffed the counters instead of female tellers.

In essence, without the labour of women on 24th October Iceland was brought to a standstill. The strike was organised efficiently and comprehensively, with nearly 90% of Icelandic women taking part in wide scale collective action. In Reykjavík approximately 25,000 women, a significant portion of the city’s 82,000 inhabitants, filled the city’s streets. Though protest was concentrated in the country’s capital, smaller meetings and demonstrations were held across the country. The strike also had a significant personal impact on Icelandic men, who were forced to take their children to work since women refused to partake in childcare duties. Icelanders also recall how on the day food shops ran out of easy-to-cook meals like hot dogs, which Icelandic fathers could prepare for their children without the help of their wives. 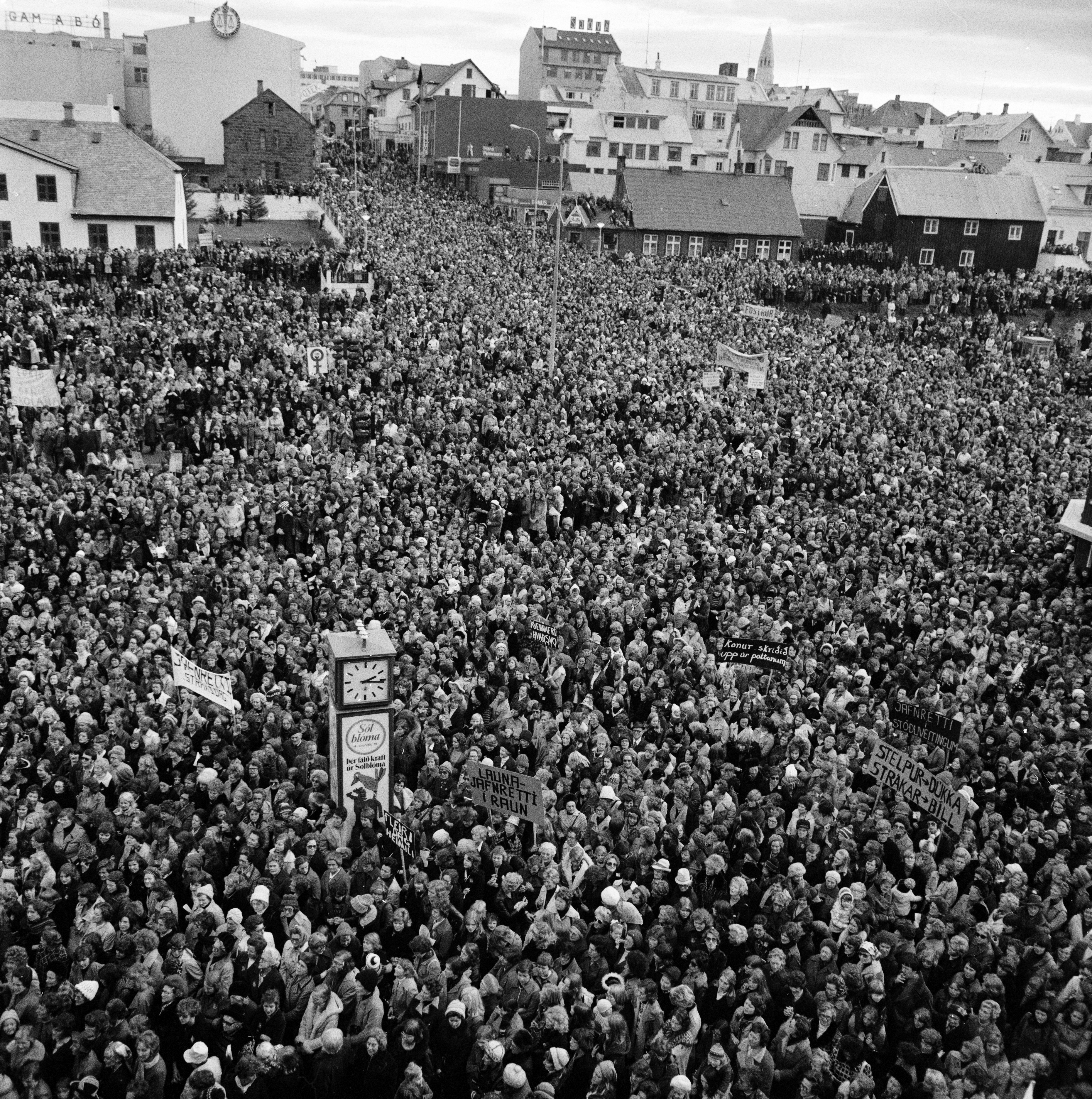 Photograph by Ari Kárason. Courtesy of Reykjavik Museum of Photography.

The Women’s Strike led to the Icelandic parliament passing a gender equality bill in 1976, thus adopting an official gender policy in the country. Though the Women’s Strike of 1975 was generally regarded as a success and a victory for women, Icelanders continue to strive for gender equality and women’s rights. For example, Icelandic women have subsequently returned to the Women’s Strike as a form of efficient national protest, with similar collective action taking place in 1985, 2005, 2010, 2016 and 2018. It is also important to note that in Iceland the Women’s Strike is known as Kvennafrídagurinn, or The Women’s Day Off. This is because in 1975 Iceland had strict labour laws forbidding wildcat strike action (going on strike without the approval of union leadership) and the Committee organising the protest did not want any women to get fired due to participating in the walkouts.

More recently, the Icelandic Women’s Strike has inspired instances of similar women’s collective action in other countries. In 2016 women in Poland pushed back against a proposal to criminalise abortion and ban it even in cases where a woman’s life would be in danger were the pregnancy to be continued. In response to the proposed legislative restrictions, the famous Polish actress and director Krystyna Janda posted an article online drawing attention to the successes of the Icelandic Women’s Strike. She called on Polish citizens to take note of what Icelandic women had achieved in 1975 and suggested that Polish women organise a similar general strike. Janda’s post led to a social media campaign that went viral and invited hundreds of thousands of women and men to join a National Strike of Women. On 3rd October 2016, like had taken place in Iceland forty years’ prior, thousands of Polish women refused to go to work and rallies were held across the country. Adding a new protest method to the Icelandic model, women and men across Poland wore all black clothing on the day, which led the strike being known as Black Monday. Three days later the Polish parliament rejected the proposed legislative change, marking the strike a success.

Following the Black Monday protests, other women’s initiatives echoing the collective mobilisation tactics first used by Icelandic women in 1975 have taken place globally and women’s strikes demanding women’s bodily autonomy and economic rights have become a global phenomenon. As an example of this, the transnational network International Women’s Strike was formed in 2017, bringing together cis and trans women from over fifty countries. These recent developments demonstrate how women’s collective action can defy space and time, with the protest tactics originating in a small Nordic country nearly half a decade ago being recycled and appropriated in a myriad of different geopolitical and temporal settings in the 21st century. 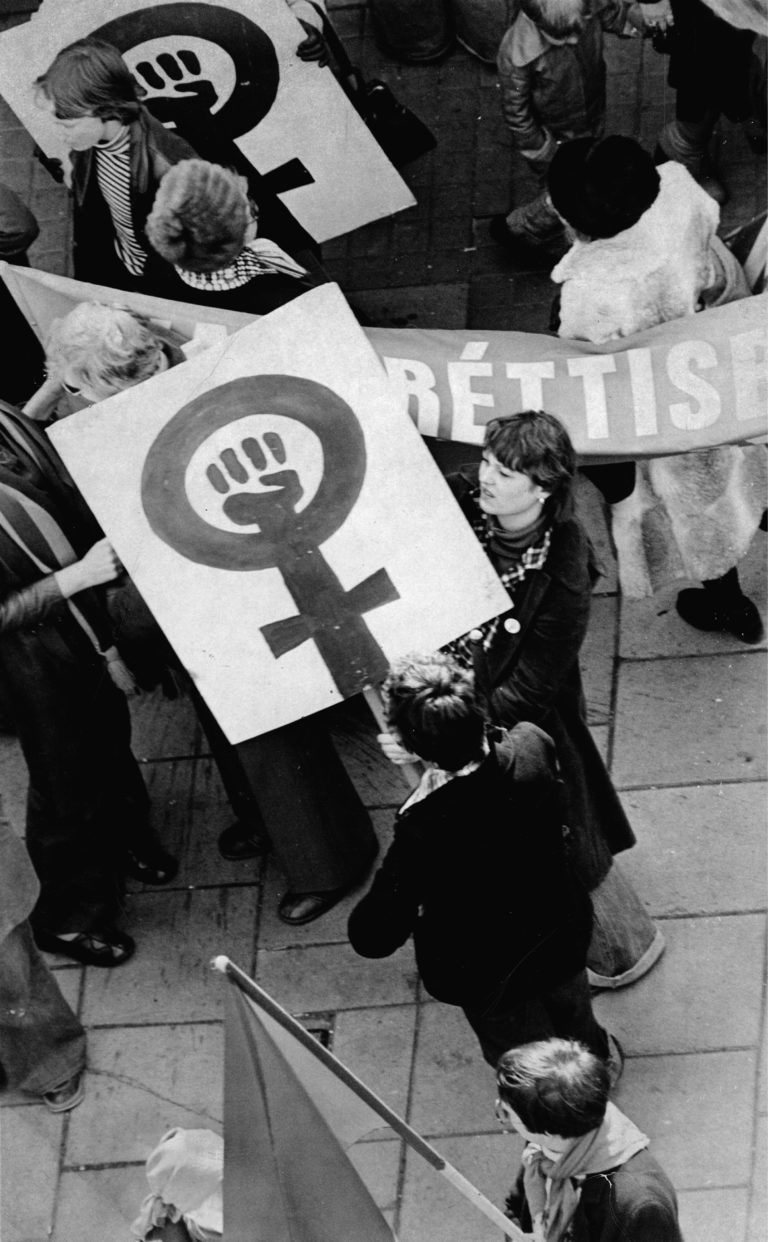 Photograph by Ari Kárason. Courtesy of Reykjavik Museum of Photography.