Skip main navigation
Home / History / Gender & Feminism / A Global History of Sex and Gender: Bodies and Power in the Modern World / The gendered value of work

The gendered value of work

How do types of work become gendered? And, how are some jobs identified as men’s work and others as women’s work? Let's explore.
© University of Glasgow
Moulinex, Cormelles-le-Royal, France, 1965. Archives du Calvados 2003 JP 1058 2160. © Direction des Archives du Calvados.

Distinctions between women’s work and men’s work are often represented as natural. Yet we know that the kinds of work considered suitable for men or women have not remained constant.

In examining such changes, historians have shown how gender is inseparable from the many ways in which social, cultural and economic values are attached to work and workers.

Thus, for example, even the ostensibly neutral language of ‘skill’ is tied up with gender hierarchies. And what counts—or doesn’t count—as skill is important because it determines a worker’s career opportunities and earning potential.

A good example of how skill has been defined in gendered terms can be found in the history of industrial work in twentieth-century France. In 1980, 79 per cent of female manual workers in France were in jobs classed as semi-skilled or unskilled, compared to 44 per cent of their male counterparts (Danièle Kergoat, Les Ouvrières (Paris: Le Sycomore), p.54).

These workers undertook specialised tasks such as machine operating or assembling products and were less well-paid than skilled workers, the majority of whom were men.

The ranks of semi-skilled workers

The ranks of semi-skilled workers had expanded in the 1960s and early 1970s as consumer goods manufacturing boomed and women were hired to these jobs in large numbers.

In a 1966 study, sociologist Madeleine Guilbert noted that employers explained the deployment of women as assemblers by referring to the ‘lightness’ of the work and the need for dexterity, which was considered a feminine attribute. 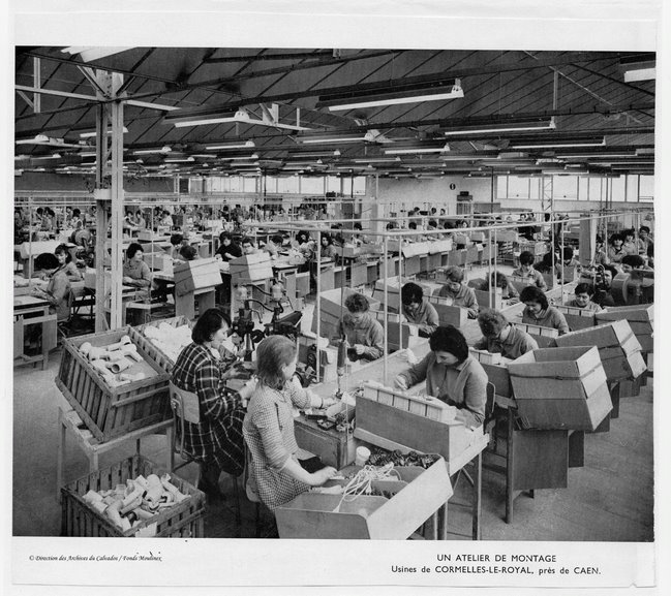 The wartime recruitment of woman

In her study of the French and British metalworking industries between 1914 and 1939, Laura Lee Downs shows how this gendered understanding of aptitudes took shape, as the wartime recruitment of women in a previously male-dominated sector coincided with the adoption of new mass-production methods that increasingly divided work into simplified repetitive tasks.

Downs argues that employers in both countries understood the world in terms of social types, associating attributes such as sex, age, class and ethnicity with particular productive and intellectual capacities. They translated these broad social assumptions into a new technical division of labour in the factory.

Viewing women as less reliable and less able to learn than men, French employers refused to offer them the same training as the men that they replaced, preferring to make technological and organisational changes to accommodate a workforce that was understood as inherently different in character (Laura Lee Downs, Manufacturing Inequality: gender division in the French and British metalworking industries, 1914-1939, pp.10-11).

As a result, specific tasks that might previously have been performed by a skilled male worker who had completed an apprenticeship were hived off into specialised jobs that could be mastered through repetition with modest on-the-job training. Women were said to be suited to such work as they were less capable of initiative and autonomy than men (Downs, p.11).

As women mastered the tasks allotted to them, observers commented on the apparent affinity between mechanised work and the swift, gentle, dexterous movements of the female body. Even when it was acknowledged that women had developed relevant skills in other occupations such as dressmaking, there was a tendency to naturalise these as feminine attributes such as ‘delicacy’ (Downs, pp.83-4, 93).

In this way, work that was previously done by men was redesigned, deskilled and redescribed in ways that framed it as feminine, while skilled jobs as mechanics, toolmakers or supervisors continued to be accessible only to men through an apprenticeship.

This division of labour, forged in the exceptional circumstances of the First World War, was still a feature of this sector when French manufacturing sites began to close and move overseas at the end of the century. 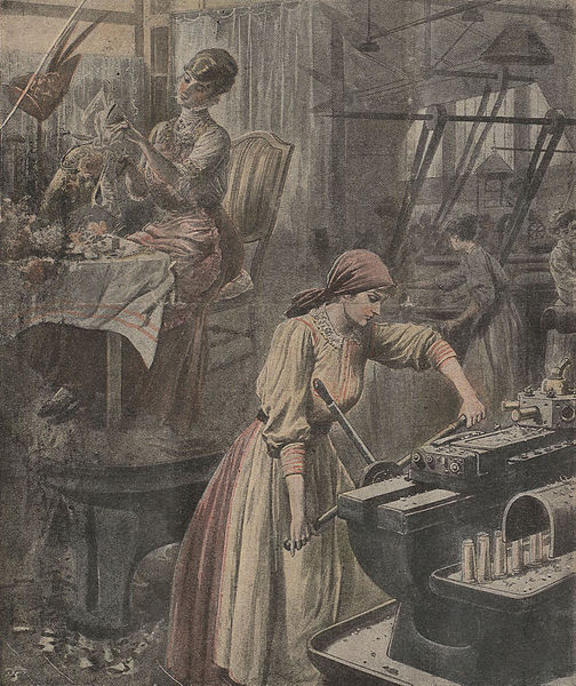 Writing in the 1960s, Madeleine Guilbert argued that if women showed an aptitude for routine work that required dexterity, it was perhaps because of skills learned through domestic labour.

To see these abilities as natural rather than acquired served to devalue them, justifying lower status and pay (Fanny Gallot, En Découdre (Paris: La Découverte, 2015)).

While industrial employment has declined, Guilbert’s insight can also be applied to today’s growth industries such as care work, where skills learned by working-class women through unpaid labour in the home continue to be undervalued and poorly rewarded in the labour market.