Find out more
Home / History / Gender & Feminism / A Global History of Sex and Gender: Bodies and Power in the Modern World / Blended Families and Childcare in Early Modern Scotland

The idealistic construction of the nuclear family – which has been upheld as the cultural ideal – is beginning to be challenged.
© University of Glasgow

The nuclear family – consisting of two parents married to each other with biological children – has been privileged for the past century as the normative ordering of society and the upholder of ‘traditional family values’. Men and women who joined together in marriage to start a family were favored by law and society, while those who remained unmarried or those who raised children outside of wedlock were stigmatized and placed on the margins. The idealistic construction of the nuclear family – which has been upheld as the cultural ideal throughout much of history – is beginning to be challenged in our modern world. The family is no longer an institution forged exclusively through heterosexual marriage and procreation. The legalization of same-sex marriage and advances in medical science enables LGBTQIA+ couples to marry and start a family if they wish to do so. The growing acceptance of divorce and the de-stigmatization of lone-parenthood allows men and women to raise their children either independently or by co-parenting without conforming to the structure of the ‘nuclear’ family unit.

Yet families in the far distant past were just as complex as they are today. In early modern Scotland, the normative family unit did not always consist of a married couple with biological children. As a natural consequence of war, famine and plague, many men and women experienced the death of a spouse and a subsequent remarriage. Blended families – often termed ‘stepfamilies’ in our modern lexicon – were commonplace in the past. This section will explore blended families in early modern Scotland, focusing on remarriage following the death of a husband and how widows cared for children born from multiple marriages.

Early modern Scottish families were permeable groups that were formed and reconstructed through marriage, death and remarriage. The nuclear family – consisting of husband, wife and biological children – was short-lived for many men and women across early modern Europe. It has been estimated that 1 in 3 children lost at least one parent before the age of 21 and that at least half of all young women had lost their fathers by the time they married. Widows would typically remarry men from a similar social and economic background to assist in raising young children and managing their household economies. A whole range of factors influenced a widow’s ability to remarry, including the presence or absence of children, her age, and her economic and social standing. The timing of when a family was broken by death had a profound affect on the likelihood of remarriage for a widow. 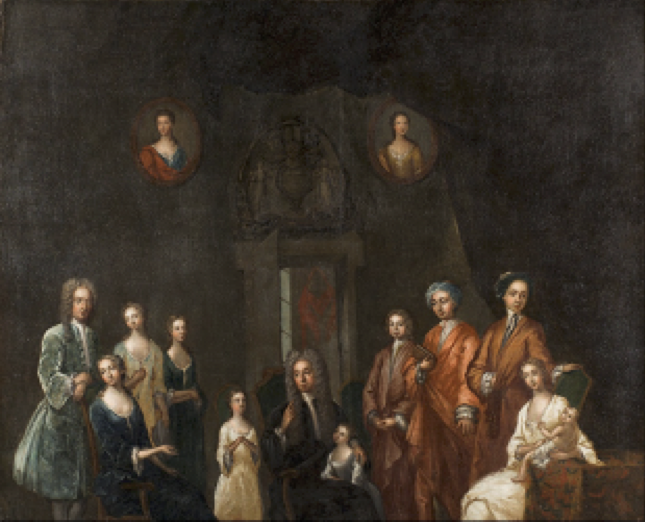 FACT: Sir Francis Grant married three times. He had three sons and three daughters with his first wife and two daughters with his second wife. Note the portraits of his two deceased wives in the painting. His third wife is pictured on the right cradling a child.

A range of legal frameworks shaped the lives of stepfamilies, such as the rules of guardianship on whether children could join their mother when she remarried, and how children and stepchildren might share an inheritance. Legal officials were aware of the complications that could arise following a widow’s remarriage. Mothers were only entitled to act as tutrixes (legal guardians) to their children as long as they remained widowed. The office of tutory granted women control of their children’s inheritance portions while they remained in their minority (the age of 12 for girls, 14 for boys). Fears that a covetous stepfather could seize control of the children’s inheritance was a constant concern in legal handbooks. At times, husbands sought to regulate their wives’ control of family property in their wills and testaments, with the underlying dread that a new husband – and by extension a stepfather – could potentially squander the children’s inheritance. Prior to his death in November 1609, John Lennox, a burgess of Glasgow, noted that his wife Jonet Graham was entitled to enter as ‘tutrix’ to their three children, including ‘the bairne or bairnes [child or children] the said Jonet is p[rese]ntlie with [i.e. pregnant with]’, noting that the office of tutory was only to ‘indeur during hir weadowhood.’ If Jonet decided to remarry, she would lose control of her children’s inheritance, and the legal guardianship of her children would pass to members of her late husband’s kingroup.

When a widowed mother decided to remarry, she was expected to liaise with members of her deceased husband’s kingroup when providing care for any children she brought to her new marriage. Children under the age of seven typically resided with their mother after the death of their father. Older children would live with members of their father’s kingroup or else train in apprenticeships or work in domestic service in another person’s household. The mother’s financial obligation towards her children was subject to much deliberation in Scottish legal handbooks. Sir John Erskine, in his 1773 legal handbook Institutes of the Law of Scotland, argued that mothers should only be liable to provide care provision for the children after paternal ascendants had been obliged to contribute (grandfathers, uncles, and so on) following the death of the father. 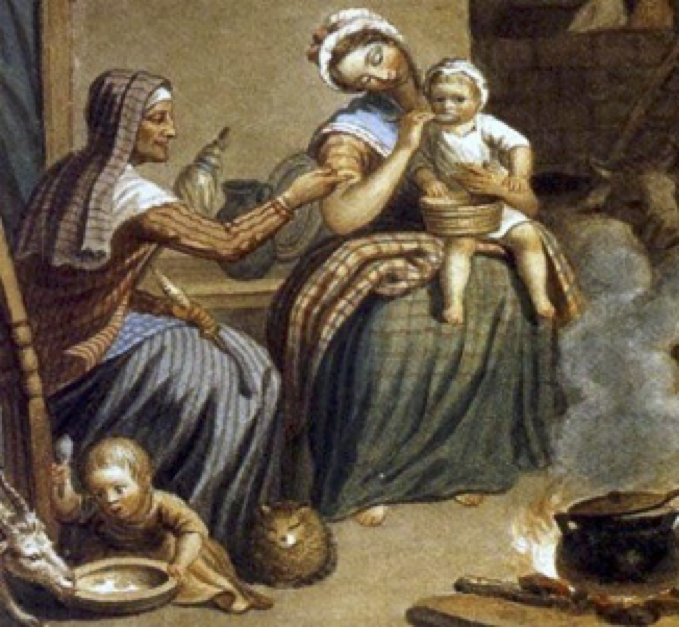 Remarried widows approached the law in order to secure regular child maintenance payments from the kingroup of their late husbands. In 1670, Margaret Mathie, a remarried widow, embarked upon a bitter legal battle before Glasgow’s commissary (reformed church) court which involved various members of her late husband’s family. Margaret alleged that her children’s tutor – her late husband’s brother – was refusing to pay yearly maintenance payments to assist in the care of her three children. Margaret claimed that since her husband’s death in 1666, she and her new husband had cared for the children ‘in household and Familie’ and that they had provided them with ‘meit [meat], drink, bedding and abulziementis [clothing]’. Her new husband also appeared before the court and insisted that he was not obliged to pay for his stepchildren’s care. Remarried widows were clearly expected to negotiate their caring responsibilities alongside their previous husbands’ kin, and new husbands expected to be financially compensated when caring for their step-children.

Blended families in the past consisted of numerous members tied through blood and marriage. A widowed mother and widowed father with children from previous marriages could marry and combine their households. In such a blended family, both husband and wife became both parent and stepparent to numerous children, with the possibility of adding even more children as a result of the new union. Unlike the past, stepfamilies today are usually formed following the breakdown of a previous relationship. In our modern world, childcare is often viewed as a natural consequence of a woman’s role within the family – it is unpaid and undervalued as a legitimate form of work. In the past, however, childcare was compensated and was understood as a necessary form of domestic work for women. The costs of childcare fell squarely at the feet of men, while the physical labour of childcare was overwhelmingly performed by women.