Can Africa contribute to cost mitigation?

Read Christian Burri and Eric Nébié’s reflections on how Africa can leverage the trends of drug development costs.
© University of Basel
The cost of the development of a single drug has now reached about USD 2.6 billion in the pharmaceutical industry (DiMasi et al, 2016). This causes a threat to health systems due to constantly rising prices of drugs entering the market. Financial return on investment and the market outlook are crucial in choosing which drugs to develop particularly in the pharmaceutical industry.

The number of drugs developed per billion dollars spent on drug Research and Development has declined significantly over the last two decades, accompanied by a loss of efficiency. The reason for the declining efficiency is that despite major technological progress in the discovery and preclinical stages of drug development, the clinical development stage still lags behind. This means that clinical drug development as a whole becomes slower and more expensive over time (Scholz, 2020). 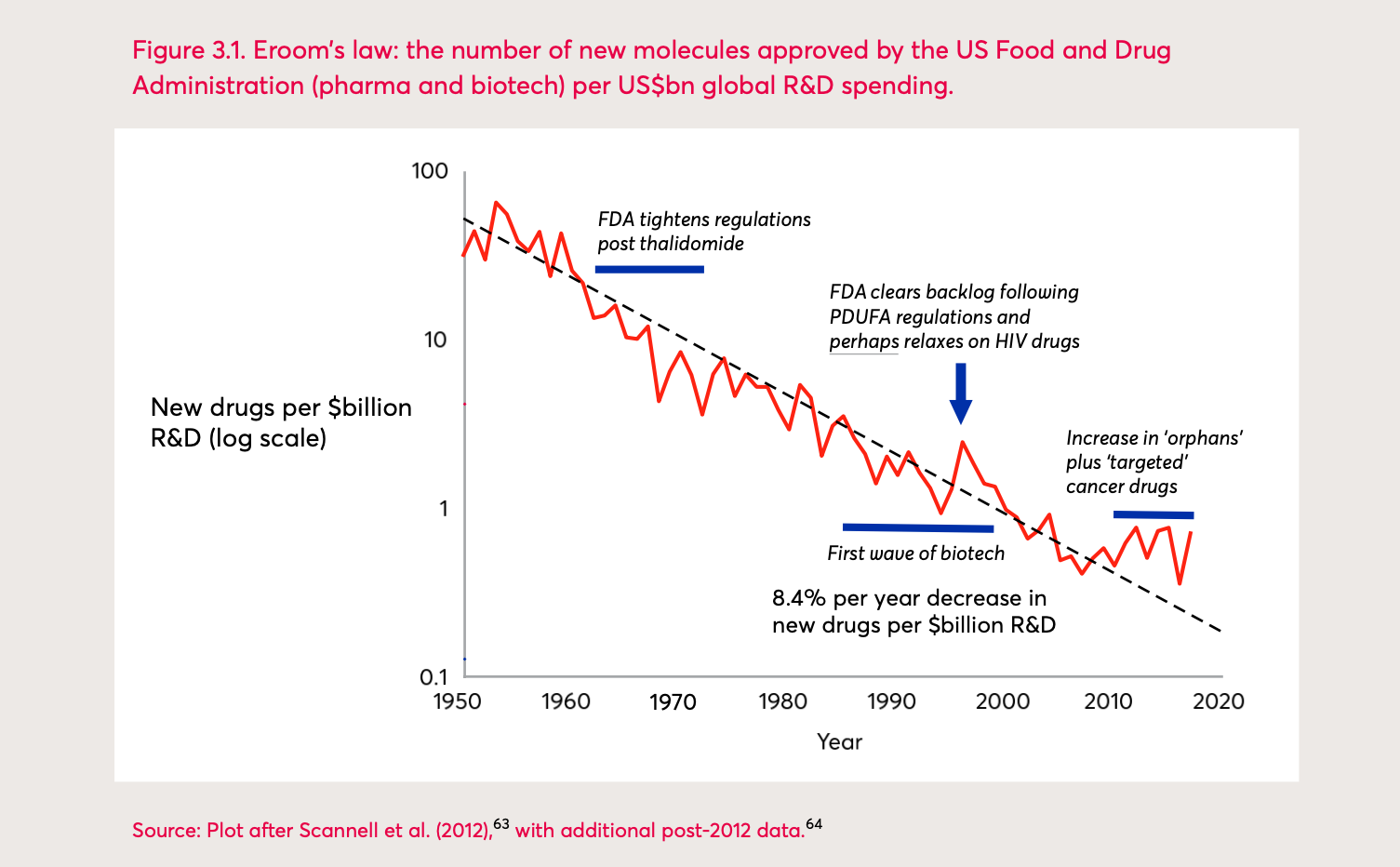 Eroom’s Law: the number of new molecules approved by the US Food and Drug Administration (pharma and biotech) per billion US dollars global R&D spending 1

Research and Development efficiency primarily depends on the probability of success and the length of clinical trials. However, there are various factors that can make such processes inefficient: The duration and complexity of clinical trials are steadily increasing, making them longer and their protocol design more complex. This can lead to challenges in understanding and conducting them correctly.

Furthermore, strict regulations and legal aspects of clinical trials that result in an overestimation of the risks of trials and exaggerated quality approaches lead to increased costs.

Another factor in the rising costs of drug development is the exponentially increased interest in orphan drugs since 2010, which target rare chronic and degenerative diseases in high-income countries. This precision medicine approach has a high potential of financial return on investment for pharmaceutical companies. For instance, a single patient treatment against spinal muscular atrophy costs approximately USD 2.1 million (Scholz, 2020) in high-income countries.

Given the increasing number of clinical trials initiated and/or conducted in Africa, an endogenous model can make a difference to reduce the gap of efficiency in the clinical development stage, possibly with strong collaboration and partnerships and an involvement of Product Development Partnerships.

For example, the emerging African centres of excellence in research with their large human resources and infrastructure capacities progressively take the lead in drug development and are therefore able to tackle African health priorities with little investments. Clinical trials can be initiated and conducted by African experts locally “from the bench to the community”. The combined efforts of African researchers, government agencies, industry and Product Development Partnerships have proven to be successful for efficient drug development against the most urgent diseases. Through these collaborations, the cost of new products can be contained between USD million 110-170 for a single drug.

One key to mitigating costs and accelerating drug development for unmet needs in Africa is the engagement of local governments and funding bodies in research funding, the establishment of empowered regulations as well as the implementation of an African drug development pipeline. The African Union could play this important fundraising and coordination role to make the difference.

Another important factor is the (so far proposed) strengthening of the African Medicines Agency (AMA), analogous to the European Medicines Agency, intended to facilitate the harmonisation of medical regulations in Africa. It is intended to improve the distribution of medicines as well as to strengthen the development of new drugs on the continent. With these engagements, a better future with equity of access to drugs can become reality.