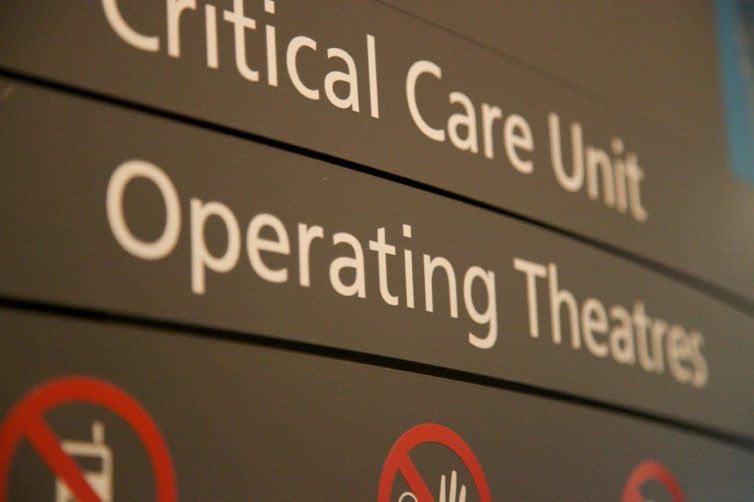 I witnessed my first post-surgical critical airway emergency during a Saturday afternoon on-call as a registrar in a specialist centre. A morning list had been running in a parallel theatre and a young patient underwent elective anterior cervical neck decompression. Later, the consultant surgeon was on a post-operative ward round when he discovered his patient in extremis. I can still picture now the patient’s face as she was wheeled back into the anaesthetic room, cyanotic, stridulous and adopting a tripod posture that I had only ever read about in paediatric textbooks. Owing to the skill and composure of the two anaesthetic consultants and surgeon on duty, the patient made a full recovery, albeit with some scarring. The more likely outcome as she re-entered the anaesthetic room that afternoon seemed death. In the three hours after her initial operation, the patient had a raised respiratory rate and could not swallow, but the nurses and junior surgical doctors had reviewed and reassured the patient and her symptoms were attributed to acute anxiety and surgical pain. No-one considered the possibility of an anterior neck haematoma (ANH) in their differential diagnosis. It later became apparent that this was what the patient had suffered. The case review identified a requirement to provide a teaching tool that could embed awareness and knowledge, and provide a clear pathway of escalation for successive rotations of junior doctors and nurses. The SHOUT Airway Risk Tool was produced as a sticker, placed on observation charts for patients after anterior neck surgery. The routine referral to SHOUT when observations are performed and when patients are assessed creates a better awareness of ‘airway symptoms’ for the health professional looking after the patient. It also specifies an escalation pathway: if any SHOUT symptoms present within 24 hours post operatively, call for senior help.

Anterior neck surgery includes anterior cervical decompressions (ACDs), thyroidectomies, major head and neck dissections and carotid endarterectomies (CEA). The estimated incidence of post surgical anterior neck haematoma (ANH) from case reports is 0.2%-1.9% for ACDs [1], but may be as high as 3% for CEAs [2].

Special attention is needed as initial symptoms of ANH are subtle and non-intuitive and may overlap with common post-surgical symptoms, delaying recognition until rapid deterioration into life threatening airway obstruction. Frequent rotation of surgical juniors and nursing staff may result in a variable clinical awareness at the bedside. The most recent ANH would have occurred a statistical 10 SHO rotations previously.

Initial symptoms may overlap with common post-surgical symptoms and non-airway-minded clinicians perceive ‘airway symptoms’ to mean cyanosis and/or stridor, both of which develop late in ANH.

Airway obstruction results from direct compression secondary to haematoma and/or impaired venous return and lymphatic drainage from the head and neck resulting in swelling.

Respiratory: progressive increase in respiratory rate or difficulty in breathing and anincrease in oxygen requirement. Hypoxia, cyanosis and stridor are late signs, signifying a critical airway. 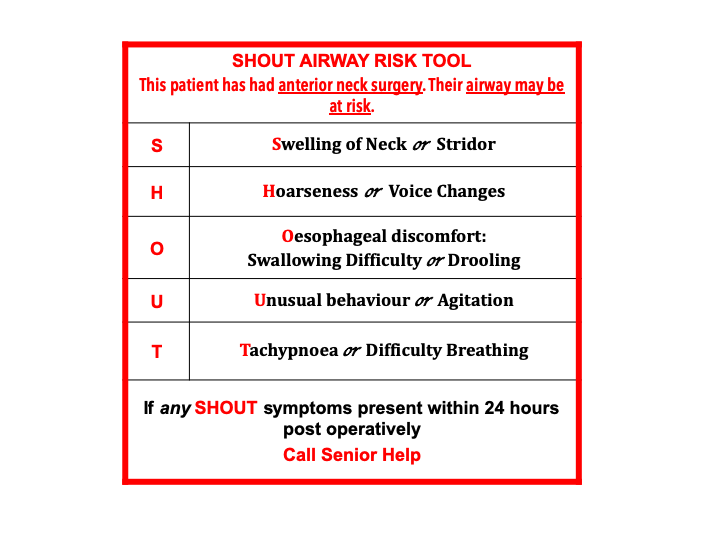 Baseline SHOUT features are recorded to facilitate comparison over time. SHOUT provides a clear escalation pathway and can help improving education of the multidisciplinary team.