In this article you can read how Andreas J. Bircher defines some relevant terminology related to allergic disorders.
© University of Basel

The evolution of allergology includes a lot of stories of discovery and failures; we might describe this evolution also as a tragedy of errors. However, we may conclude one important fact: a correct diagnosis is crucial but rarely trivial to find. For these reasons, it is essential to distinguish different phenomena and to clearly define the different types of hypersensitivities and some of their common mimics.

When a patient experiences an untoward reaction to food, a drug, or an insect sting, people often call it an allergy. Hypersensitivity reactions may mimic other disorders, such as infections, intoxications or other diseases. For example urticaria, the nettle rash, may be spontaneous or caused by infections or food allergens. And a liver affection may be caused by a mechanical obstruction from gallstones, a toxin like alcohol, a hepatitis virus infection, or from a drug causing toxic, or allergic liver damage. Therefore, an exact documentation of all symptoms and signs, the exact time course with onset and evolution, if necessary supplemented with further tests, is mandatory. If infectious and toxic causes are excluded, the type of hypersensitivity reaction and its mechanism (see Fig. 1) should be established in order to choose the correct test procedures and treatments.

Hypersensitivity reactions can involve immunological (ie allergic) or non-immunological (ie pseudoallergic or idiosyncratic) mechanisms. Hypersensitivity is characterized by objectively reproducible symptoms or signs, initiated by exposure to a defined stimulus at a dose tolerated by non-sensitive subjects. Triggers include haptens, allergens, and pseudoallergens. The major groups of elicitors are pollen, mites, and insects, animal dander, food, insect venoms, contact allergens, and drugs. 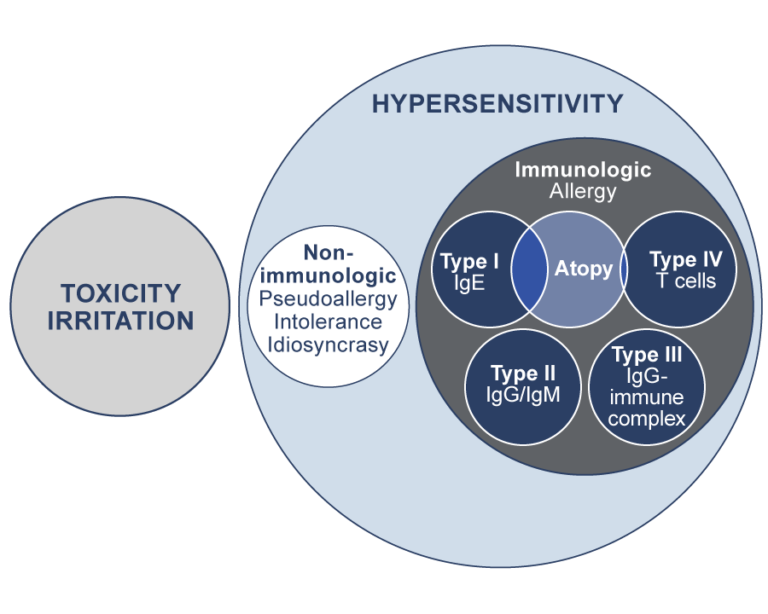 The term allergy is commonly used with very different connotations. In medicine, it basically means the elicitation of an unnecessary, exaggerated response of the immune system to an innocuous, exogenous agent, called allergen. Initially, allergy was mostly used to refer to IgE-mediated type I reactions, a broader definition of allergy that includes all immunologically-mediated hypersensitivity reactions is now more widely accepted. An allergic reaction always requires previous contact with an antigen and a sensitization phase of 5 to 7 days. The elicitation phase is mediated either by allergen-specific antibodies (IgE or IgG) or effector T cells, resulting in an inflammatory response of the adaptive immune system. Dependent on the activated pathway and cells, allergic symptoms occur immediately (within minutes to a few hours) or delayed (within 12 to 24 hours). Allergens causing IgE-mediated immediate reactions are pollen, food, bee and wasp venoms, or some drugs. Symptoms include rhinoconjunctivitis, asthma, intestinal symptoms, cardiovascular signs, or systemic anaphylaxis resulting in shock. Allergens causing delayed type IV reactions include contact allergens, such as metals and fragrances as well as some drugs. Manifestations include allergic contact dermatitis or eczema and disseminated drug exanthems. The four types I-IV of allergic reactions will be discussed more in detail in Step 2.2.

Atopy, as we will learn later, encompasses three diseases, allergic rhinitis, allergic asthma and atopic dermatitis. They may occur in so-called atopic individuals who may have an inherited decreased function of their skin and mucosa barriers as well as a deviation in their immune system. This means that they mount an unnecessary IgE-antibody immune response against respiratory and food allergens and/or develop atopic dermatitis, an itchy skin disorder particularly occurring in babies and children. The skin manifestation may also be triggered by irritants and be associated with food allergy. Atopy can therefore be understood as a subgroup of mainly type I allergy.

This term is used for drug hypersensitivities, where no specific antibodies or T cells are involved, however, effector mechanisms are activated mimicking symptoms as in IgE-antibody-mediated immediate reactions. These reactions do not involve sensitization and can, therefore, occur on first exposure to the culprit agent. Pseudoallergic reactions are more dose-dependent than IgE-mediated allergic reactions, however, they may still result in severe non-immunologic anaphylaxis. Common triggers of pseudoallergic reactions are pain medications (eg aspirin and other nonsteroidal anti-inflammatory drugs), radiocontrast media as well as some food additives (eg salicylates, benzoates, and some dyes). Diagnosis of non-immunologic hypersensitivity is based on a distinctive clinical pattern, clinical signs, time course, and response upon elimination of the cause.

This term goes back to the Hippocratic school and the concept of the four humors. Before a clear concept of immunological mechanisms was established, idiosyncrasy was used for any adverse reaction, particularly from drugs. Today, it is still used to describe adverse reactions to drugs causing symptoms distinct from the pharmacological effect of the respective drug and with a non-immunological or unknown background. Therefore, it is nowadays often used as synonym for pseudoallergy.

Intolerance is a broad term mostly used for reactions to food or drugs. Food intolerance is mainly used for symptoms arising from carbohydrates (eg lactose or fructose). In drug intolerance, normal pharmacologic doses of a drug result in symptoms of over-dosage. Usually, the triggering substances are improperly metabolized by the patient’s body due to a genetic or acquired enzyme deficiency. Some authors also use it as a synonym for pseudoallergy.

Toxicity reflects the dose of a particular substance, called toxin, needed to damage cells and organs of a living organism. Toxicity is dose-dependent and every substance has a certain toxicity. Some toxins act on certain organs (eg skin, lung, liver, or nervous system), others on the whole organism. Acute toxicity results in immediate damage, whereas chronic toxicity results from repeated, long-term exposure to a low-dose toxin. Toxins may be chemical agents from natural (eg venoms) or synthetic origin (eg acids and alkali), or physical agents (eg X-rays).

In dermatology, irritation describes a form of acute or chronic toxicity of the skin and mucosal membranes. Irritants may be mechanical (eg thorns), chemical (eg plant saps and animal poisons, soaps, mild acids, or solvents), or physical (eg ultraviolet rays). Irritants cause damage to the upper skin or the mucosal cell layer, resulting in an inflammatory response of the innate immune system. For example, a sunburn is an acute irritation of the skin, whereas long-term and repeated washing with water and soap may result in a chronic irritation of the skin.

An infection occurs due to the invasion and reproduction of pathogenic microorganisms such as viruses, bacteria, fungi, and parasites in a living organism. An infectious agent may affect the skin and mucosal membranes or internal organs, such as lung, gastrointestinal tract, or in the whole organism. Symptoms and signs depend on the type and number of pathogens, the site of infection, the target organs, and the response of the host’s immune system. They may be absent, mild, or life-threatening. The immune system fights infections by innate and adaptive immunity mechanisms. If it overshoots it may harm organs of its own host, as it was observed in some COVID-19 patients. The physiological microorganisms, being part of to the microbiome of the skin, the oral cavity, the intestine, and the lung, are not considered infectious. On the contrary, they play an important role for the well-being of the host.