In this article Andreas J. Bircher introduces some of the most relevant signalling cascades involved in immune reactions.
© University of Basel
Arachidonic acid, kinin, or complement cascades: these names all stand for pathways, which may become activated in an immune reaction. Through these so-called cascades, multiple factors such as leukotrienes, prostaglandins, or bradykinin are formed, which later trigger a number of local and/or systemic symptoms.

Some mediators, such as histamine, are released by specific immune cells (ie mast cells or basophils). Once released, histamine may cause itch, blood vessel dilation, vascular leakage, or an increase of the heart beat. Other mediators are generated in complex cascades. Cascades are sequences of molecular reactions leading to specific end products and effects. The principle of cascades may be compared to the principle we encounter in a lot of folk tales and stories – see more in the attached PDF (Jockel). 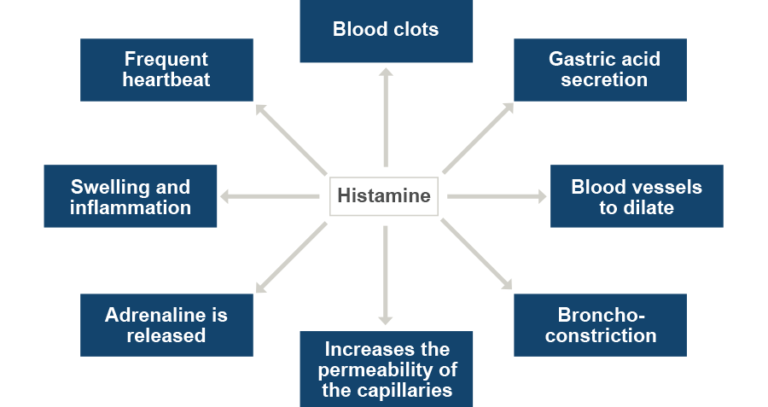 Generated messenger molecules are either cell-derived substances or proteins present in the plasma. Cellular soluble factors encompass histamine, platelet-activating factors, as well as mediators produced in the arachidonic acid cascade. Plasma proteins stem from either the kinin or to the complement systems. In the following, we explain the most relevant pathways in-depth. While reading through this complex article, please do not try to memorize each single step but focus on the mediators which are generated in each cascade and what symptoms they cause.

Activation of the kinin (or kallikrein-kinin) cascade leads to the formation of the two factors bradykinin and kallidin. More specifically, in this pathway the enzyme kallikrein is produced by the inactive precursor prekallikrein after its activation mediated by the enzyme Factor XII. Kininogen is then transformed to bradykinin by the enzymatic action of kallikrein on kininogen. The peptide hormone bradykinin is for example involved in the molecular mechanisms of vasodilation (ie the dilation of blood vessels) or in pain reception.

The complement system is an important part of the innate and acts as an enhancer of the adaptive immune response and plays a major role in the clearance of invading pathogens. It consists of a group of serum proteins that activate inflammation, cell lysis (ie the destruction of the cell membrane) and participate in opsonization (ie coding of bacteria to make them more susceptible to phagocytosis). The complement can be activated by a number of different triggers. Upon activation, the complement proteins respond in a sequential manner producing a cascade of reactions. The major components are C1 through C9 – named in the order in which they were discovered and not in the order in which they function.

They can be activated by the classical, the alternative, or the mannose-binding lectin (MBL) pathways. The classical pathway becomes activated when C1 (ie the first compound in the cascade) binds to an antigen-antibody complex. The alternative pathway is activated by bacterial surfaces, specifically bacterial toxins that are called lipopolysaccharides. The third pathway, called MBL pathway, reacts to carbohydrate patterns on the pathogens surface. All three pathways of complement activation follow the same sequence after cleavage of C3 into C3a and C3b. C3a is involved in stimulating inflammation, while C3b may attach to the surface of microorganisms. Phagocytes have a binding site for C3b and therefore microorganisms with bound C3b are more susceptible to phagocytosis. C3 convertase may further be converted into C5 convertase, which cleaves C5 into C5a and C5b. C5a enhances inflammation and acts as a attractant for phagocytes. C5b reacts with other complement components (ie C6 to C9) to form a membrane attack complex. This structure forms a hole in the cell membrane of an infected cell for example and destroys it (cell lysis). 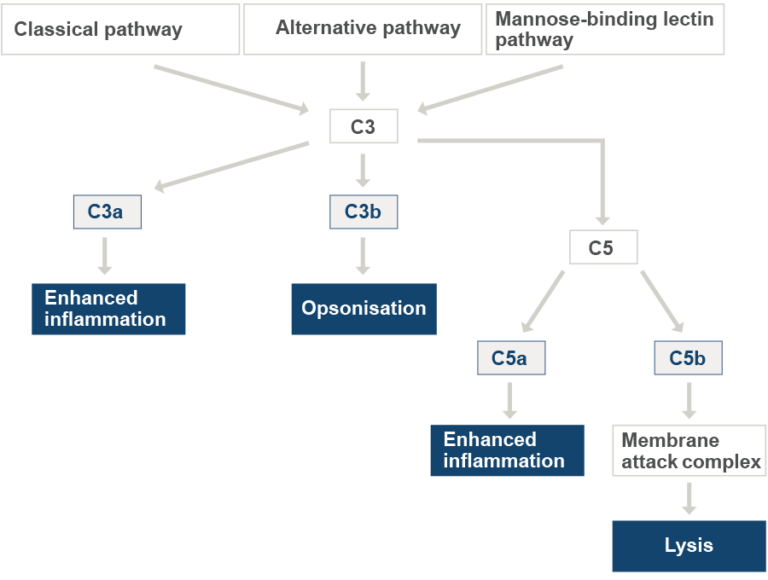