The smartphone doesn’t look like a human being, instead, the smartphone is invisibly anthropomorphic in that it responds to & transforms its user.

For more than a century, humanity has been fascinated by the development of the robot and its potential to realise our imagination of the anthropomorphic machine, which closely resembles a human being. This fascination may have led us to neglect a more profound and more advanced trajectory that lies beyond the visibly anthropomorphic machine – and is best exemplified by the smartphone. A smartphone doesn’t look at all like a human being, instead, the smartphone is invisibly anthropomorphic in that it responds to and transforms its user, and in so doing, becomes both an extension of that person and their reflection.

Examples of the smartphone going ‘beyond anthropomorphism’ from our fieldsites

As already noted, the ability of the smartphone to learn from us through machine learning is matched by our ability to transform the smartphone after purchase through adding apps, changing settings and creating content. The composite result can be an astonishingly close relationship between the individual and their smartphone.

For example, in the Dublin fieldsite, we met a woman who sees herself as a consummate professional and turned her iPhone into a kind of life manual with detailed instructions on every task, such as paying a particular bill. For each task, she linked her calendar, notes, relevant websites and sometimes even PowerPoint presentations on how something is done. It was really her smartphone that was the best example of the kind of person she believed herself to be.

At the other end of the spectrum was another research participant in Ireland, a gruff fisherman who did not like to think of himself as someone who is attuned to technology and deleted his Skype account as soon as he stopped requiring it: he saw the messaging app as a requirement while his daughter was living abroad but saw no need for it otherwise. In so doing, he aimed to retain pure minimalist functionalism that only sees him deploying the smartphone for what he regards as strictly necessary. This expressive potential of the smartphone doesn’t just relate to individuals. For example, a couple may replicate their previous gender division of labour through each using apps that the other then does not use: one may do the banking while the other focuses upon sharing family news.

Even if we just consider these first cases as individuals, actually they, in turn, express ideals of gender or professionalism that are generated by the cultural values in which they were brought up. Similarly, for many older people in our Palestinian fieldsite, smartphones are as reflective of their faith as of any other individual trait. On the other hand, there were other individuals in the Dublin region who seemed unique relative to what we would expect from a ‘typical’ smartphone user, for example, one man who carried five phones in his jacket pockets which he used to record music. As anthropologists, when we consider the relationship between the smartphone and an individual we are then presented with another question of whether the individual seems, in turn, typical of some cultural category or as in his case relatively eccentric.

The infographic below shows a step-by-step illustration of how smartphones can both complement and extend individuals. 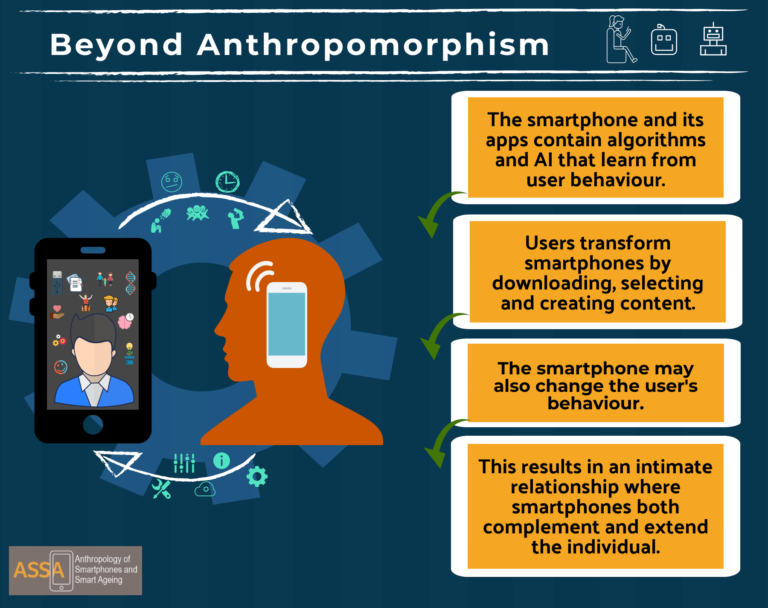 Is smartphone use making us smarter?

Clive Thompson’s 2013 book Smarter than you think documents the way that human beings become more intelligent by incorporating such devices. Not having to memorise ‘facts’ but instead memorising the way we use the smartphone to find facts is making us more ‘smart’. The best precedent for this use of smartphones was the invention of printing, which consigned many previous memory functions to the ‘hard rectangle’ of the book, which would then be the precursor to the hard disc or now, the Cloud. Few people would have a problem with the suggestion that books have made humanity more clever because people were prepared to cede so much of memory to the written word. Similarly, many of the older people who were research participants in the ASSA study see the smartphone as a literal aide-memoire. For example, when working with people in São Paulo, Marília Duque noted that many participants had considerable anxiety about dementia and memory loss and saw the smartphone as an important device not just for finding and storing information, but also for brain training exercises that they hoped would delay the onset of these conditions.

To conclude, the smartphone is unprecedented in the degree of intimacy it achieves in its relationship with us. This is why a person who has lost or mislaid their smartphone may feel that they have become separated from an essential part of themselves and become extremely upset. But this is achieved not through conventional anthropomorphism, that is the technological object resembling a human being, but by becoming intimately connected with our capacities and our minds.