Skip main navigation
Home / Creative Arts & Media / Communication / An Anthropology of Smartphones: Communication, Ageing and Health / How different communities use smartphones to connect with others

How different communities use smartphones to connect with others

Community is linked to the maintenance of strong kinship connections across families, small groups and large networks that cover a country

There are ways that smartphones are used to help organise community activities of the kind that older people can get involved in.

The term community is being used in a very broad fashion here. Community in many regions, for example within the community of Palestinians from al-Quds, is linked to the maintenance of strong kinship connections across related families.

Community may also refer to small groups, such as a sports team in a village or a group of friends who arrange long-distance walks.

At the other end of the scale, there are networks that cover an entire country. In the case of Cameroon, this might be a religious organisation or a political movement.

The Peruvian migrants living in Chile, where Alfonso Otaegui conducted research, organised many community activities based around their devotion to a particular saint. Apart from using the device for everyday communication, smartphones were also important as tools to share religious events with their friends and family abroad.

In the photo below, taken by Alfonso Otaegui, you can see his research participants using their smartphones to take photos of a painting of Christ, everyone aiming their smartphones at the image. These are Peruvian migrants who live in Santiago and are honouring the Lord of Miracles, the most revered Peruvian religious icon. The devotees broadcast with the smartphones the celebration to their friends and family abroad. 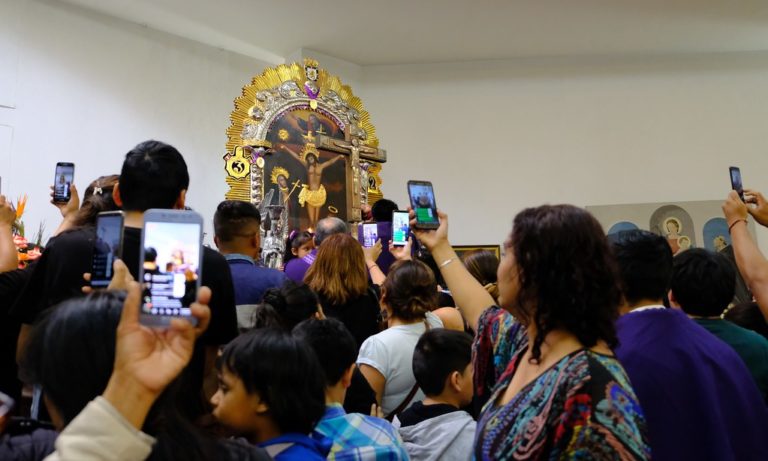 Smartphones can equally assist at all such levels, thanks to what we call ‘scalable sociality’. This refers to the growth of multiple apps and platforms that can now work at a wide range of scales and complement each other. So, for example, you might use Twitter to address the general public, but Instagram’s Close Friends feature for a few very close friends. It is then possible to match the variety of apps and platforms to a range from small groups to very large community groups.

Ten years ago, Facebook was generally regarded in the media as something that could only be used by young people partly because it was seen as naturally aligned to individualism, if not narcissism, which older people considered more common amongst youth. Yet in our project, we found that in the Dublin and Milan fieldsites perhaps the dominant use of Facebook today is by older people and particularly as a place for organising a very wide range of community activities that now have prominent Facebook sites.

Like Facebook, WhatsApp and messaging apps like Telegram also became a place to organise community activities. In São Paulo, Marília Duque observed how WhatsApp helps people to be share similar interests and activities, from a hobby to volunteering.

The app also became a platform where older people can show others in the community how active they are, as São Paulo is a work-oriented society where being busy is seen as proof of character.