Learn more about some m-Health related issues in China. 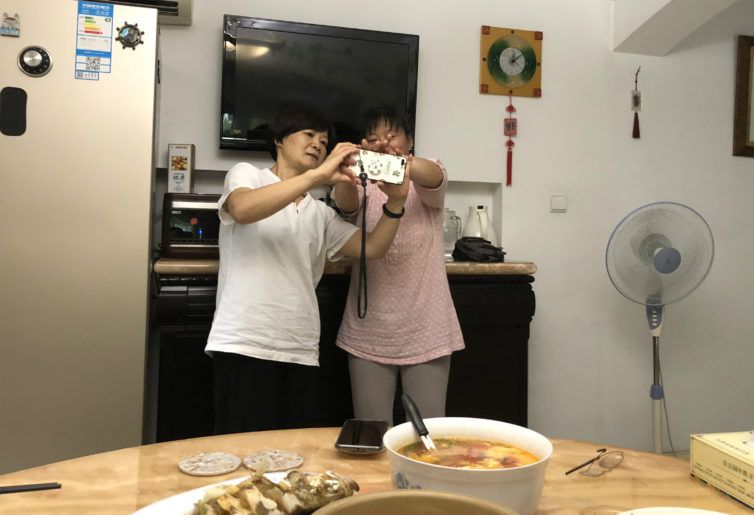 “Have you checked the video I sent you?” This is how Mrs. Shi greets her neighbour, Mrs. Cai, during the after-dinner stroll where they bump into each other. “Yes, just watched, very useful! I have forwarded it to my family group”, responds Mrs. Cai, waving the smartphone she is holding in the palm of her hand. “Have a look!” Mrs. Cai opens her WeChat, quickly swipes up on the screen, clicks on the video that Mrs. Shi mentioned, and passes the screen on to other neighbours beside her. This is a typical daily interaction among older neighbours from the residential compound in Shanghai, where Xinyuan Wang stayed during her fieldwork.

The photo below shows how this interaction plays out in real life, and what the video that is circulating is likely to be.

Traditionally, the most common daily greeting in China was: Have you eaten?, reflecting the significance of food in Chinese social life. In recent years, however, another daily greeting has started to make its appearance: short videos about health that they share via smartphones, a popular activity among older people in urban China.

The Rise of Short Health Videos in China

The practice has spread rapidly. In 2018, a survey suggested that people above the age of 50 spent as much as 50 minutes each day watching short videos, compared to 17 minutes they spent the previous year. Most retirees watch at least some short videos on their smartphones every day. Both Mrs. Shi and Mrs. Cai, in their 60s, started to use the smartphone around four years ago and soon become heavy users. The video Mrs. Shi sent to Mrs. Cai was a one-minute video illustrating how to massage an acupuncture point near the ankle to treat sciatica and arthritis (seen on the right of the figure above). The genre of videos known as self-care (yangsheng) is one of those most commonly shared by older people. Ranging from 10 seconds to 2 minutes, the files are small enough to be sent as visual messages that are embedded in people’s daily conversations on WeChat. Mostly, they are watched within WeChat, rather than on specific short video platforms. Sharing short videos is a significant means of expressing care and building solidarity among family members and friends.

Xinyuan also conducted fieldwork in care homes for the elderly in Shanghai, where she witnessed how care workers applied short videos as an effective and efficient tool in healthcare communication. The WeChat group created voluntarily by care workers, includes all the care workers and the main family members of the live-in patients. Every day, more than 30 messages are exchanged among members on these WeChat groups, mainly short videos about group activities or individual videos of patients taken by care workers on their personal smartphones (you can see this in the photo below). All of the families reported that seeing their parents’ videos every day greatly reassured them. 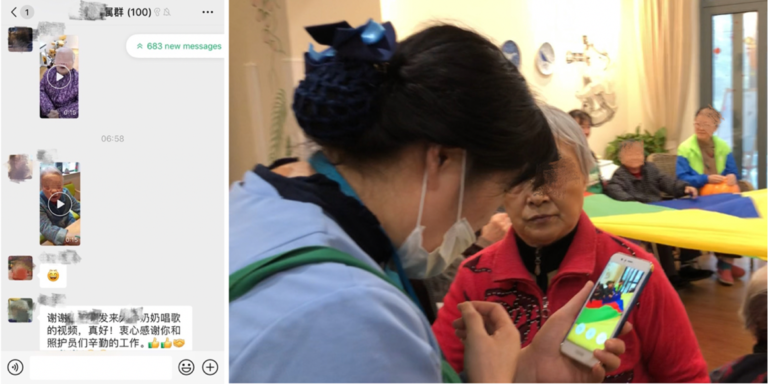 In this particular care home, carers are required to record more than 50 kinds of health-related and life-related pieces of data every day. But these more quantitative measures are mainly to demonstrate the institution’s professionalism. In practice, what mattered more to patients and their families were the videos sent to them every day – informal expressions of sensitivity and concern that became an important component of patients’ welfare, especially within palliative care. This kind of experience demonstrates a unique understanding of patients, with their unique life stories and personal traits. However, the videos are ignored by the official database where patient information is stored, as they do not appear as ‘data’. As a result, when care workers change jobs, transfer patients, or even change schedules, their successors receive piles of medical data, while the previous carer’s understanding of the patient usually gets lost. Increasingly, care workers’ emotional work has been eclipsed by the focus on figure-driven, data-centred professionalism.

This has therefore become the focus of Xinyuan’s proposed involvement. She hopes to gain greater recognition of the importance of short videos as an informal expression of care and persuade the institutional authorities that they should pay attention to these practices and not only the bits of information that can appear as formal data (such as vital signs like the patient’s pulse or blood pressure).