The Fine Line Between Care and Surveillance

Discover the line between care and surveillance. 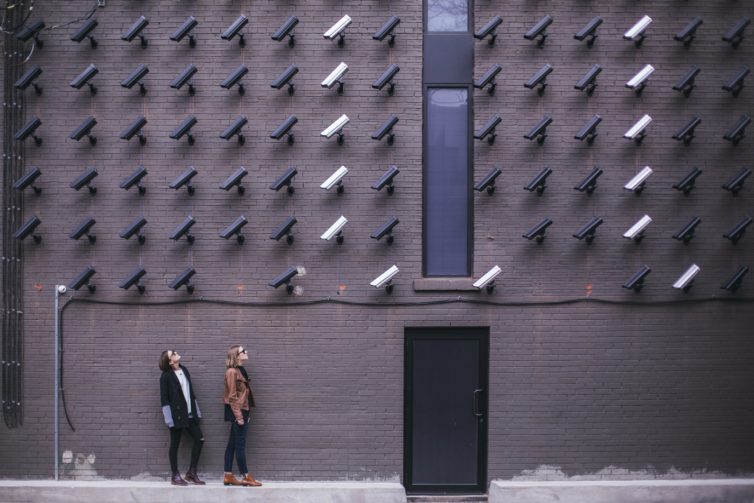 Even prior to Covid-19, the team had observed that the smartphone simultaneously facilitates our capacity for extending both care and also surveillance. We form WhatsApp groups to monitor and look after frail parents, but then these same parents are anxious about their loss of autonomy. Younger parents might monitor their children’s smartphones. They almost always see this as care, while their children mostly regard this as _surveillance). In many social relationships, people were already carefully negotiating this fine balance between care and surveillance prior to the pandemic – a need that had become more acute thanks to the smartphone.

The graphic below summarises the concept of the fine line between care and surveillance: 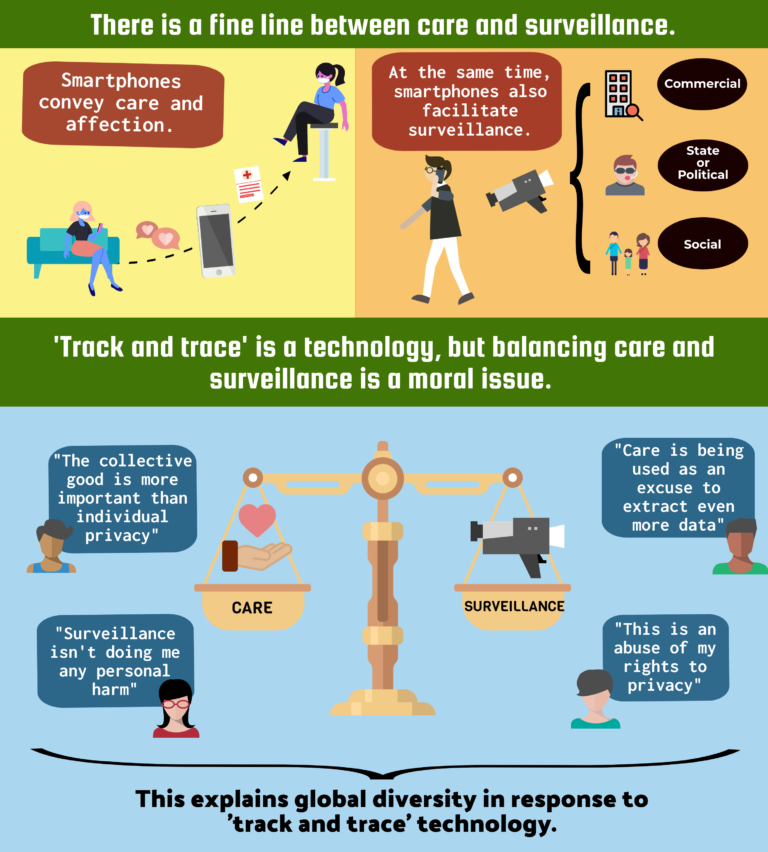 The concern over surveillance feeds into a much wider anxiety about the potential of digital devices. A best selling book in 2019 by Shoshana Zuboff was called The Age of Surveillance Capitalism. Thanks to whistleblowing events such as the revelations of Edward Snowden, or the claims that personal data was used to interfere in elections in the Cambridge Analytica scandal, we may be forgiven for also thinking of our smartphone as a kind of spy in our pocket. Yet at the very same time, there have been many examples in this week’s course that show the capacity of smartphones for extending care.

Care and Surveillance During COVID-19

With the advent of Covid-19, our team’s observations about the fine line between care and surveillance became the world’s observation. This was particularly evident thanks to the development of contact tracing smartphone technologies during the pandemic. These were developed in order to determine who someone with the virus has previously been in contact with.

Contact tracing apps exploited the smartphones’ ability to closely monitor an individual. The technology itself was developed in many regions across the world, yet the response could not have been more heterogeneous. Contact tracing was quickly and often quite successfully deployed in countries such as South Korea, while in the US and parts of Europe, there was much more caution about the potential intrusion into the private domain, and deployment was generally less successful. The reason is that this fine balance between care and surveillance is not a technological issue, but a matter of moral adjudication and cultural values.

In the previous step, we referred to a website that hosted anthropologists’ contributions and that we helped develop called anthrocovid.com. One of the questions posed to the contributors was about this balance between care and surveillance. The posts on the site, particularly the ones under the ‘Care and Surveillance’ section, help illustrate how this varied considerably across the globe.

In our Irish fieldsites, for example, many people had worked in education and health and tended to closely associate with the state and take on the citizen’s role in monitoring each other’s compliance with lockdown restrictions.

The meme below, taken from a Facebook group in Ireland, is an example of discussing this monitoring in a humorous way. 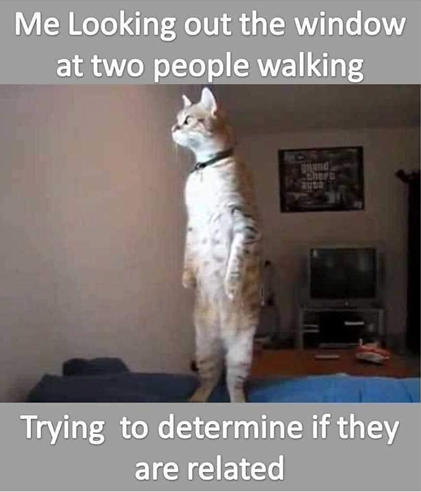 Circulating this meme on Facebook was obviously intended as a humorous comment on the way people took on the state’s concern to monitor compliance with regulations, but each region and country faced its own issues. For example, a seaside resort in Brazil approved a surveillance drone because they felt visiting tourists threatened their health. Another example comes from China, where many regard the heavy surveillance measures during COVID as evidence that the government was taking care of its citizens. In Japan, some people were concerned by the government’s decision to use LINE, the most popular messaging app, to deliver surveys that asked about people’s health and whether they had been abroad recently (all of these examples come from reports on the site and can be read using the links below). Laura Haapio-Kirk was in touch with her research participants throughout lockdown and created an illustration that explains their dilemma:

The people in our field site of al-Quds worried that any monitoring by the state might reinforce surveillance whose purposes related more to political than health concerns. By contrast, in South Korea, the government was re-elected partly because of popular support for their use of track and trace technologies. Often, these issues confirmed local political differences. Democratic-voting New Orleans found itself having a different attitude to contact tracing to the republican state in which the city is situated. Local state governors in Brazil had very different attitudes from President Bolsonaro.

What lessons were learnt from our research and from anthrocovid.com? The events of that year certainly acted as powerful evidence for the importance of an anthropological perspective. This is because, ultimately, it was cultural values rather than technology that determined the local outcome. Secondly, our research, which had taken place before Covid-19, showed that nearly everyone has considerable experience in this fine balance between care and surveillance. This suggested to us that populations could have been much more widely consulted and involved in decisions about track and trace technologies, which might have made people more willing to support their deployment, something which governments generally failed to appreciate.

To read the contributions we summarised above in more detail, follow the links below. You can also read the entire ‘care and surveillance’ section of this site by going to the very last link. There, you will find a map that shows what countries the contributions have come from.