The smartphone apps for everyday life

In this article, we talk about how people integrate apps into their daily lives and what apps they use. Let's explore.

One of the most obvious ways to think about the smartphone is simply as an app machine. Yes, the smartphone is a handset, but perhaps it is mostly just the place where we locate our apps, which are the things that we actually use.

That perspective follows fairly obviously from the appearance of a smartphone, as can be seen in the photo below. 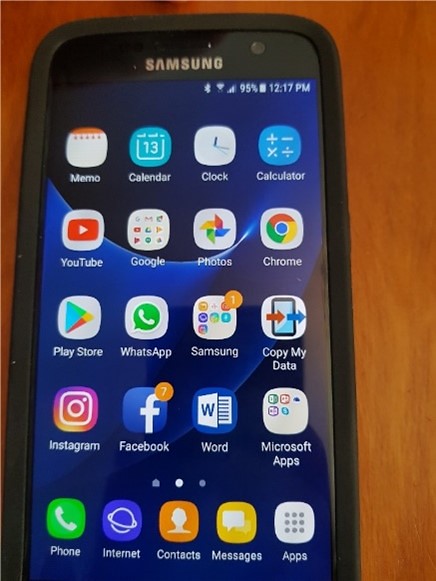 In the ASSA project, we didn’t just ask people what apps they used. Often, older people started by claiming they only used their smartphones for texting and voice calls. Instead, we sat with people and went through every app on their smartphone screens one by one and discussed these in detail.

People in the Dublin fieldsites who claimed to only have two uses for their smartphone were generally then found to be using 25 or 30 apps and functions of their phone.

Yet, if instead, we had simply counted the apps on their screens, that would have been equally misleading. The same interviews showed that many of the apps you can see on their screen were not in fact being used.

The infographic below, based on interviews with research participants in Ireland, gives an insight into the participants’ app use.

Ubiquitous, in-built apps such as the torch and the alarm are, unsurprisingly, used by almost everyone, while more ‘niche’ apps like TripAdvisor were only used by about a tenth of the people we spoke to. 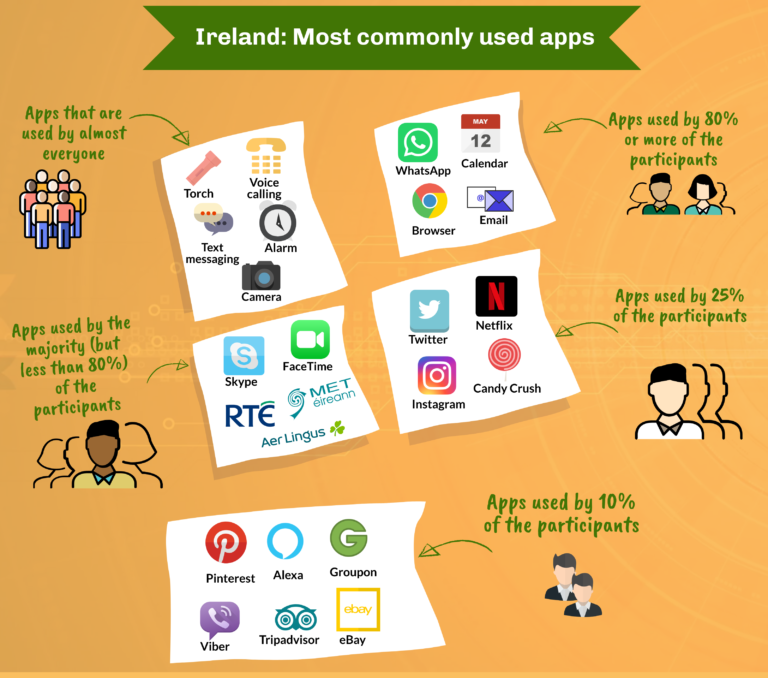 What then is an app? On the one hand, there are apps that exist for one purpose only: parking a car or reading a newspaper. These relate to the mindset of smartphones as solutions – ‘there is an app for that’.

At the other extreme, there are apps that strive to be able to do absolutely anything you might want to achieve with your smartphone. The best example is the multi-purpose app WeChat, one of the most popular apps in China, and similarly LINE in Japan.

On WeChat, people can use social media, do their shopping, arrange medical appointments, pay utility bills and many other things. WeChat has been called a ‘super-sticky’ app (reference below) since it becomes so useful that it feels impossible to leave it.

So actually, apps are more like a scale that ranges from single purpose to multi-functional. China is, again, an important signpost that suggests we may not always use smartphones through the medium of apps in the future.

In recent years, what is called the ‘mini-programme’ has increasingly replaced the app for many smartphone deployments in China.

In any case, when we examine our ethnographic findings, we find that to a surprising extent, people are not as orientated to apps as we might have expected.

In practice, what most people care about is the task that they want to perform with their smartphones. For that purpose, they may combine bits and pieces of different apps without much respect for the integrity or full potential of any particular app. This means that rather like you might have had a Swiss Army knife but only ever use it as a corkscrew.

For example, we encountered someone who only ever used Facebook as a way of being reminded about birthdays.

A good example of how people actually employ apps in practice came from our study of how smartphones are utilised for purposes of health and welfare. The first point is that different apps may be dominated by different functions.

A key interest is in obtaining health information. But while in some regions this is dominated by Google, in Yaoundé, Cameroon, this is a task largely associated with YouTube.

In our Ugandan fieldsite, in Kampala, sending mobile money for health purposes emerged as an important form of care towards relatives, something that will be discussed more in week three.

More generally, older people who may not be as familiar with how an app ‘should’ be used, maybe inventive in finding alternative routes to a task. For example, an older participant living in Santiago who wants to pay a bill takes a screengrab of the bill in question, then emails the image from her gallery to her sister through WhatsApp to pay together.

This may happen even though originally, digital payment may have been envisaged by the utility company as something that can be done through their proprietary app.

One result of this is that some people organise the apps on their phones to help create a kind of ‘control hub’ for their tasks, putting the apps they use at the same time next to each other. But, then, you can never tell – we also met people who colour code apps, or have them organised on their smartphones in alphabetical order.

All of this should make us hesitant before thinking about smartphones as just an app machines. It is better to consider the user perspective than the designer perspective and see what users turn their smartphones into in order to focus on what they most care about, which is rarely the smartphone itself and mostly the tasks of everyday life.