What is punk? Professor Matt Worley introduces punk, and what led to its emergence in this article for Anarchy in the UK.
© University of Reading

‘Punk’ is one of the most contested terms in cultural history. Over time, it has come to mean many things. 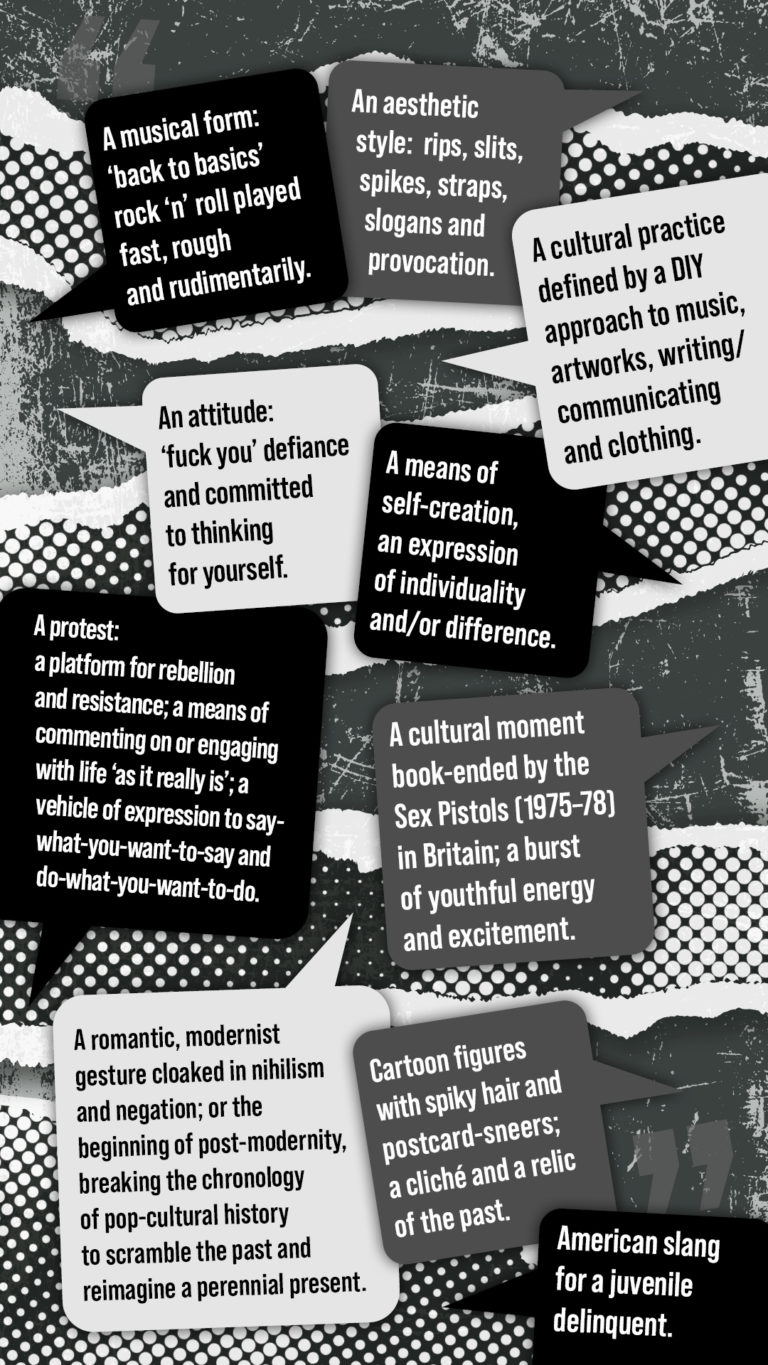 (graphic to be inserted)

What does punk mean?

Punk might be all these things and more. In a British context, the word became associated with the Sex Pistols from 1976 (the first music press review of the band – in the NME – referred to as ‘punk’).

It was then applied to a variety of bands formed (or coming to prominence) in the Sex Pistols’ wake, as well as to those who followed the bands or dressed in similar ways.

However, ‘punk’ had flickered in and out of use for some time prior to 1976. ‘Punk music’ had been used to describe the New York band Suicide in 1970 and writers such as Dave Marsh and Lester Bangs applied it to the confrontational personas of Iggy Pop (Stooges) and Lou Reed (Velvet Underground) – both punk progenitors.

‘young, decidedly unprofessional […] they exemplified the beserk pleasure that comes with being onstage outrageous, the relentless middle-finger drive and determination offered only by rock and roll at its finest’.

In Paris, music producer and promoter, Marc Zermati was selling such ‘nuggets’ in his Open Market shop, fuelling a French scene that adopted the Stooges and Flamin’ Groovies.

By this time, too, the New York Dolls – dressed in drag and enthralled by pop trash – had emerged to personify a sensibility that alluded to a snotty street kid pushing against society’s norms.

Buoyed by their example, a scene soon evolved around New York’s Bowery district comprising of the Ramones, Television, Blondie, the Patti Smith Group and others.

The diverse roots of punk

Punk, then, bore diverse roots and greater depth than may at first be apparent. In New York, signals of teenage delinquency fed through everything from early rock ‘n’ roll to French symbolist poetry, Beat writers and Andy Warhol’s Factory.

In Britain, the Sex Pistols’ cultural assault was framed by situationist ideas applied by the artist Jamie Reid, a college friend of Malcolm McLaren. McLaren had previously worked with the New York Dolls, knew Zermatt, and was the proprietor with Vivienne Westwood of the clothes shop SEX on London’s Kings Road where provocative youth culture was reaffirmed using an array of sexual and political motifs to help define a suitably punk aesthetic.

Simultaneously, punk was fun, exciting and accessible. Beyond any deeper meaning, it offered teenage thrills and spills.

Why did punk happen?

To understand why punk happened, we need to look at the socio-economic and political context of the time to which punk appeared to react and reflect.

As well as this, rock’s ageing superstars and the widening gap between performer and audience, pop star and fan, was leading to pop music losing touch with its roots, and a music industry monopolised by six transglobal companies meant musical choices appeared circumspect and narrowly-defined.

The prevailing media (TV, radio and magazines) were similarly limited, both in terms of remit and space.

Alternatively, punk might be seen as a random coalescing of people and bands generating music that was picked up on by the media, commodified by the music industry, and appropriated more generally in the realm of fashion, design and style.

The spirit, energy, and attitude of punk

Much is made of punk’s reflecting and embodying the mood of the mid-1970s, be it academically (Hebdige), musically and lyrically (The Clash), in interviews (Johnny Rotten) or journalistically (Caroline Coon and Jon Savage’s writing from the time).

In songs such as ‘Anarchy in the UK’ and ‘God Save the Queen’ (Sex Pistols), or ’White Riot’ and ‘Career Opportunities’ (The Clash), punk referenced the social tensions and economic undulations of the decade. At the same time, a band like The Damned could reject punk’s political implications, revelling instead in the music’s spirit, energy and attitude.

Punk was recognised as a cultural phenomenon by 1977, a music and a style that soon tapped into similar impulses beating from Ohio to Ontario, Brisbane to Brussels, Paris and beyond. Schoolyards, pubs and fanzines reverberated with debate as to who was or wasn’t a punk.

A cultural shift had occurred and discussion ensued. Crazy pop cult? Foul-mouthed yobs? Or the wreckers of civilization?