Skip main navigation
Home / Creative Arts & Media / British History / Anarchy in the UK: A History of Punk from 1976-78 / Punk and the Fanzine

Punk and the Fanzine

The perceived gap between the music press and its readership was Perry’s motivation for starting a fanzine, an act that embodied the sense of agency – the impulse to do-it-yourself – that drove punk’s emergence in 1976. 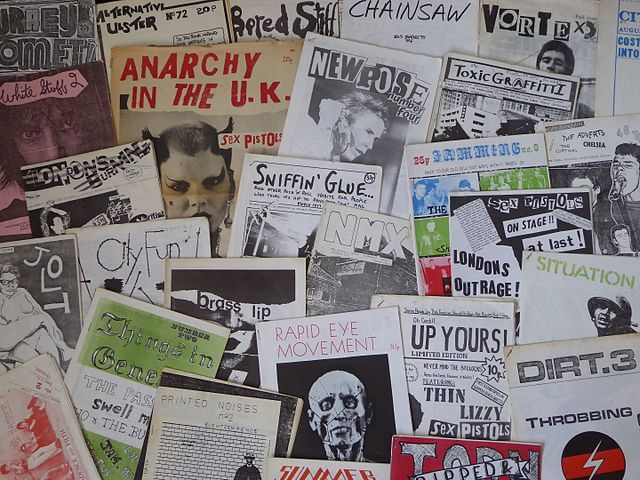 Looking back on the 1970s, the decade may appear to have been dominated by pop music and rock ‘n’ roll. This was an age of super-groups with their own jets; of Glam Rock and Bowie transforming teenage lives; of reggae finding British expression; of Northern Soul nights selling out at the weekend; of disco in sweaty clubs; of pop fandom recast in the tartan of the Bay City Rollers.

Yet, for many, the mid-1970s felt barren. Glam’s glitter had faded and rock became ‘Progressive’, with technical ability and experimentation superseding the thrilling immediacy of rock ‘n’ roll. Rock was ageing too, populated by hairy men rather than teenage boys (where were the women?). And the music played on Britain’s three TV channels or Radio One was filtered to remove anything exciting. Top of the Pops appealed as much to mums and dads (and grans) as to teenagers. Punk was in many ways a response to this blandness. Or, to quote Mark Perry:

‘Hey ho, let’s go! Heh ho let’s go!’ That’s what it’s all about, right? This thing called ‘punk rock’! The weekly music papers gave the Ramones a hard time, didn’t they, ‘cause they don’t f’ing understand that’s why. They put down their songs, stances and even their enjoyment. The reviews of the Ramones gig just sums up the whole dumb attitude of the ‘best sellers’ towards punk-rock. They treat it like some kind of freak-show to be laughed at, I don’t know why they bother. One paper’s gonna have an ‘A–Z Of Punk Rock’ next week just to be hip – why don’t they stick to Queen and all that trash that drive around in expensive cars. The weeklys are so far away from the kids that they can’t possibly say anything of importance to punk-rock fans. I can’t spell. I wouldn’t win any awards for literature but at least I don’t write down to yer! […] We’ve got to make somethin’ real happen here. Most British rock is past it now but the punk scene isn’t […] We’re gonna try and do a bit for the scene but it’s all up to you – the kids (and of course, the guys who feel young). London punk is great so let’s go!’

Punk and the Fanzine

The perceived gap between the music press and its readership was Perry’s motivation for starting a fanzine, an act that embodied the sense of agency – the impulse to do-it-yourself – that drove punk’s emergence in 1976. Punk was an attack on a media and a music industry that appeared remote and unresponsive. The six major labels (EMI, CBS, PolyGram, WEA, RCA, Decca) were slow or uninterested in responding to music at the grass-roots, but global economic instability required the ‘next big thing’ to prop up sales and gave punk an opportunity to move in through cracks.

Punk Spirit and the Fanzine

The rhetoric of punk revealed:

Punk, then, sought mediums of self-expression, agency and autonomy. Music was one; fanzines another.

The Rise of the Fanzine

Indeed, fanzines flourished with punk. Self-made and self-distributed magazines had existed for years prior to 1976, with roots in the pre-war Sci-Fi community, but they provided the perfect punk medium: simple, immediate, grass-roots. Sniffin’ Glue, in July 1976, was the first British punk fanzine. By the end of 1976, a handful were in circulation. By 1978, there were hundreds appearing in towns and cities across Britain. Nights out were recorded in breathless prose that declared ‘I-was-there’ and, crucially, that something (anything!) was happening. They were both a means of expression and a forum for cultural debate. Fanzines were the perfect synthesis of punk’s politics and practice.

Fanzines continued to multiply into the 1980s and beyond. The anarcho-punk and indie scenes became particular sites of creativity, as did Riot Grrrl from the 1990s. The advent of desktop publishing and the internet led many to predict the death of the zine. Far from it. While online zines and blogs added new dimensions to self-expression and self-publication, paper-zines continued to flourish. In particular, zines became associated with political activism, providing a collaborative process and a safe space to experiment with, disseminate and communicate ideas relating to feminism, LGBT+ politics, environmentalism and personal obsessions. The process and practice of making a fanzine still retains its appeal, allowing for immediacy as well as a tactile, physical alternative to virtual realities.