The Sound of Punk

British punk had a diverse range of sounds and styles which codified over time to become recognisable as ‘punk rock’ before developing further and splitting into various sub-strands of ‘post-punk’. There were certain characteristics:
© University of Reading

British punk had a diverse range of sounds and styles which codified over time to become recognisable as ‘punk rock’ before developing further and splitting into various sub-strands of ‘post-punk’. There were certain characteristics:

Not all bands stuck to these characteristics but reference to them recurs in interviews from the time. The attitude was assertive irreverence, not caring what anyone thought, just doing it anyway (‘fuck you’).

The Punk Sound and Violence

Scuffles at early Sex Pistols gigs lent them a reputation for violence although it was generally insinuated rather than delivered. It reflected the violent climate of the 1970s, where football hooliganism and picket-line conflict led the way to racial attacks and IRA bombs. The moral panic that followed the Sex Pistols’ TV appearance on 1 December 1976 made much of punk’s anti-social mannerisms. Sid Vicious became a household name. And even when violence was not implied or performed, those who reveled in a punch-up had motivation and opportunity to make it happen. Punk gigs could be violent spaces in the 1970s, perhaps replying to Slaughter and the Dogs’ question, ‘where have all the boot boys gone’?

As 1976 gave way to 1977, The Roxy in Covent Garden became the recognised punk club, followed by The Vortex later in the year. 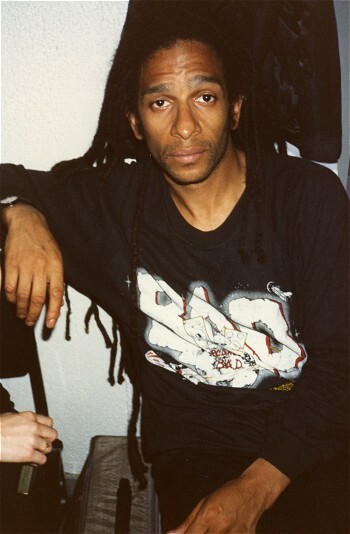 Don Letts, first DJ at The Roxy in 1977. © Andwhatsnext via Wikimedia Commons

Punk suited small clubs and pubs and claims of ‘selling out’ greeted bands that began to play larger venues. New bands found local spaces to play and released records independently until many were caught up in the major label sweep of 1977. A few bands broke through; many split up as quickly as they formed; some evolved to develop new sounds and styles. Cultural cachet was not measured by success but by retaining artistic and cultural credibility. This, obviously, became a point of contention. Was ‘London Calling’ (1979) by The Clash a great punk record providing value for money to fans and putting-the-world-to-rights? Or did it mark a turning point with the band transforming into the new Rolling Stones: just another rock ‘n’ roll band looking to conquer the USA?

In 1977, the music papers talked of the Big Five. These were the bands from punk’s new wave who broke through to the charts and registered significant record sales and media coverage. Sex Pistols were the pivot around which British punk revolved, a kamikaze mission to the heart of the music industry that imploded in January 1978. The Clash injected a social conscience into punk, committing to anti-racism and claiming to be the ‘only band that mattered’. The Damned were the first of punk’s new wave to release a single – and the first to release an album – embracing punk’s energy and chaos but shunning any political meanings projected onto their music. The Stranglers were older but connected with punk’s aggression. They crossed over in appealing to rock fans who liked their music well-played and masculine. The Jam infused punk with a mod sensibility, riding the new wave to become one of the most popular bands in Britain by 1979–80. 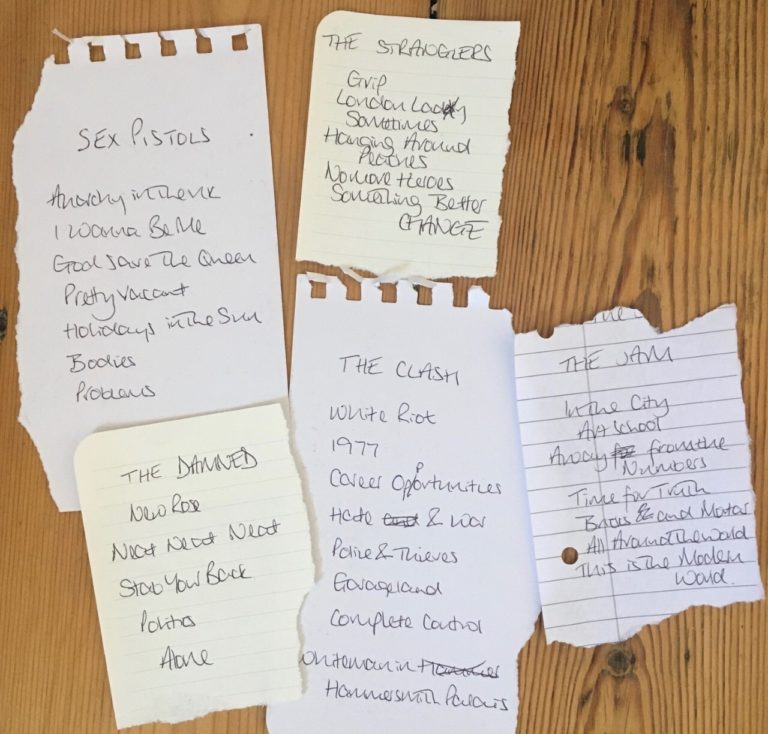 The Songs Released by the ‘Big Five’

But there was also the punk underground, where experimentation and genuine originality began to push at any notion of a simple punk formula. Some – such as Siouxsie & the Banshees and The Slits – struggled to be signed, deemed too uncompromising or distinct from the punk template. Others, including Buzzcocks and X-Ray Spex, fused infectious music with arch lyricism, infiltrating the charts with punk sensibilities. Other bands (such as Wire or Throbbing Gristle or The Fall) were informed by or emerged parallel with punk and shared its obsessions, appealing to audiences looking to move beyond the formulas of rock ‘n’ roll. And into the spaces opened up by punk, came musicians that were part of a wider new wave. Among the most well-known was Elvis Costello, touched by punk but somehow not quite of it. 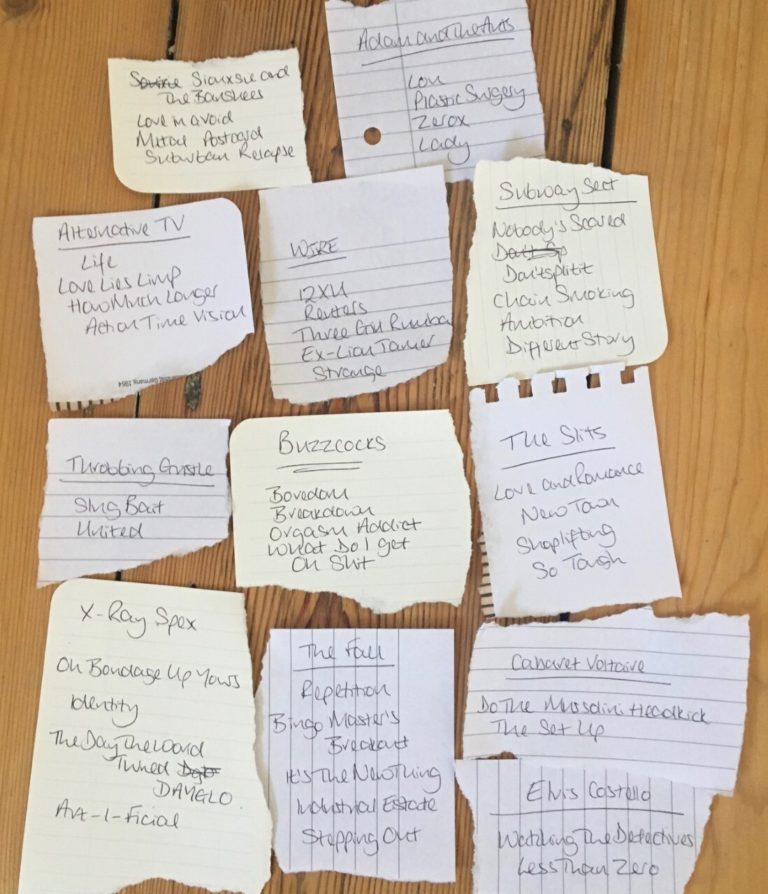 Across the country, bands that NME called ‘ramalama’ punk bands were forming, trying to play The Roxy, and speeding up rock ‘n’ roll to sometimes exciting and sometimes wretched effect. Many disappeared leaving little trace (Eater). A few changed their names to become well-known in the late 1970s and 1980s (Johnny and the Self Abusers become Simple Minds). Others just carried on regardless of recognition (Sham 69, UK Subs), paving the way for punk to continue into the 1980s as stripped down rock ‘n’ roll defying anything and everyone that denied their right to exist. And there were, of course, many US bands informing British punk: Blondie, Ramones, Talking Heads, Television, etc. 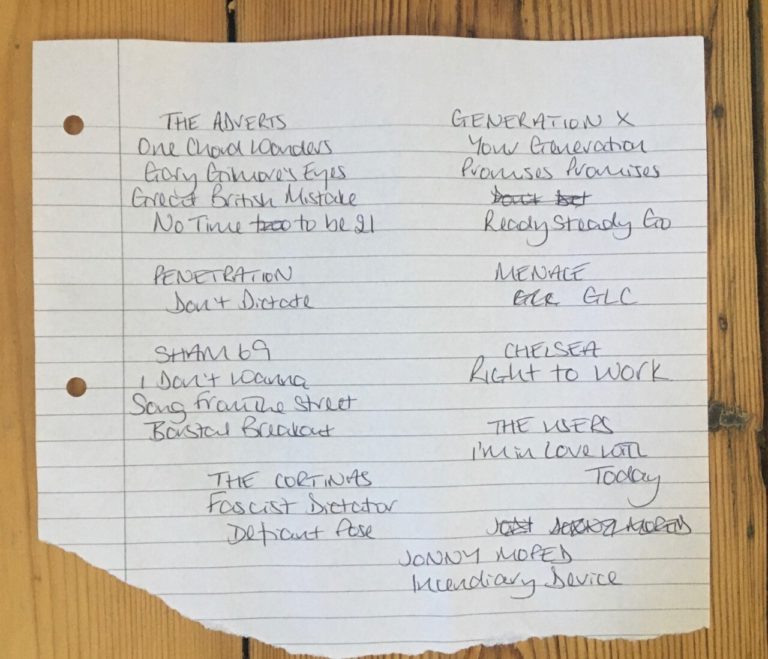 One of the best ways to hear punk’s early evolution is to listen to The Roxy London WC 2 album released through EMI in mid-1977. You can find a list of the bands and tracks included in this album via the link provided. Take a moment to look up some of the songs from this album online (or some from the lists above) and listen to them.

Which is your favourite band, or which song do you find most interesting?