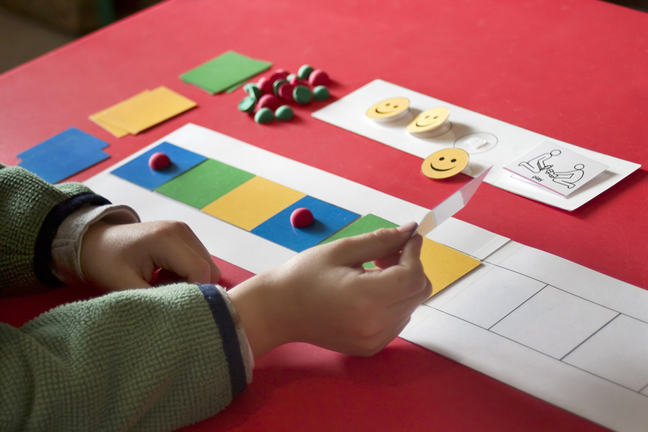 While 87% of autistic children had developmental concerns noted in their medical or educational records before the age of 3, only 43% of them received comprehensive developmental evaluations.

Currently, autism can be reliably diagnosed by the age of 2, with earlier diagnosis affording greater opportunities for intervention that supports healthy development and improves function and quality of life.

Here are some signs that your child may be autistic from CDC, that may indicate you should seek further advice:

There may be many reasons a child does not reach these developmental milestones, and timings are different for every child, but these red flags suggest assistance should be sought from health professionals for an examination.

NHS Choices suggest that the core symptoms of autism are often accompanied by other medical conditions. Most autistic children also have another condition, such as social anxiety or attention deficit hyperactivity disorder (ADHD). The most commonly associated disorder with autism is intellectual (learning) disability (ID). ASD and ID occur together in 56% of cases (38%-70%; CDC, 2016). We will discuss ID later in this course.

Despite all these associated conditions, the core symptoms of autism are:

Social deficits: Most children who develop autism have difficulty engaging in the give-and-take of everyday human interactions. By 8 to 10 months of age, many infants who go on to develop autism are showing some symptoms such as failure to respond to their names, reduced interest in people and delayed babbling. By toddlerhood, many autistic children have difficulty playing social games, don’t imitate the actions of others and prefer to play alone. They may fail to seek comfort or respond to parents’ displays of anger or affection in typical ways.

Language impairments: Young autistic children tend to be delayed in babbling and speaking and learning to use gestures. Some infants, who later develop autism, coo and babble during the first few months of life before losing these communicative behaviours. Others experience significant language delays and don’t begin to speak until much later. Many nonverbal or nearly nonverbal children and adults learn to use communication systems such as pictures (eg picture exchange communication system or PECS), sign language, electronic word processors or even speech-generating devices. We will revisit these later in this course.

Repetitive Behaviours: Unusual repetitive behaviours and/or a tendency to engage in a restricted range of activities are another core symptom of autism. Common repetitive behaviours include hand-flapping, rocking, jumping and twirling, arranging and rearranging objects, and repeating sounds, words, or phrases. Sometimes the repetitive behaviour is self-stimulating, such as wiggling fingers in front of the eyes. Some children spend hours lining up toys in a specific way instead of using them for pretend play. Repetitive behaviours can take the form of intense preoccupations or obsessions. These extreme interests can prove all the more unusual for their content (eg fans, vacuum cleaners or toilets) or depth of knowledge (eg knowing and repeating astonishingly detailed information about Thomas the Tank Engine or astronomy). Older autistic children and adults may develop a tremendous interest in numbers, symbols, dates or science topics.

Presently, we don’t have a medical test that can diagnose autism. Instead, specially trained physicians and psychologists administer autism-specific behavioural evaluations. Often parents are the first to notice that their child is showing unusual behaviours such as failing to make eye contact, not responding to his or her name or playing with toys in unusual, repetitive ways. The Modified Checklist of Autism in Toddlers (M-CHAT-R) is a list of informative questions about your child. The answers can indicate whether he or she should be further evaluated by a specialist such as a developmental paediatrician, neurologist, psychiatrist or psychologist. If you have concerns that your child might have autism, you can take an online assessment for children aged 16-30 months. The American Academy of Paediatrics (AAP) recommends that all children receive autism screening at 18 and 24 months of age, and the M-CHAT-R is one of the AAP’s recommended tools.

Another checklist to identify whether a child should be referred to a specialist for an evaluation for autism is the AQ10-child, for children aged 4-11. There is also an adolescent version for those aged 12-15. Both of these require parents/ guardians to rate their child.

Screening studies are taking place all over Europe. The map highlights some of the studies from 2012-2013: 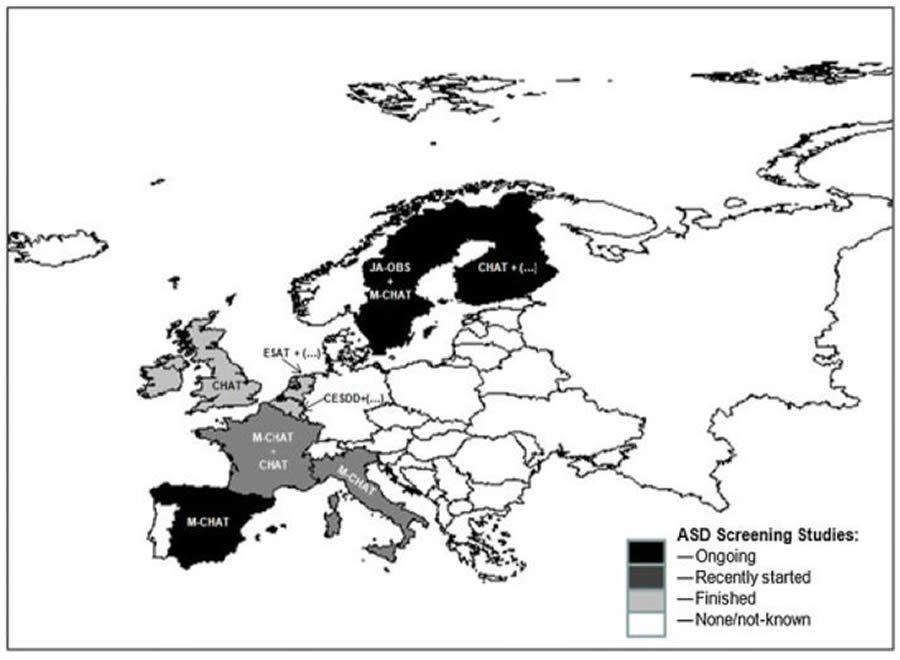