Find out more
Home / History / Archaeology / Archaeology and the Battle of Dunbar 1650: From the Scottish Battlefield to the New World / Looking at dental tartar

The teeth in our mouths are prone to the build-up of a bacterial biofilm which we call ‘dental plaque’ or ‘tartar’. Today this is usually removed by brushing or by a hygienist when we go to the dentist. This plaque can mineralise and harden to form ‘calculus’ and, in doing so, traps a variety of debris ranging from foodstuffs to pollen, as well as bacteria and human proteins.

Archaeologists can extract and identify this debris in order to learn about an individual’s environment, health and diet. The Palace Green men were one of the first post-medieval populations to be analysed using these cutting-edge techniques. Lisa Mackenzie, Anita Radini and Camilla Speller undertook the work at the University of York (UK). 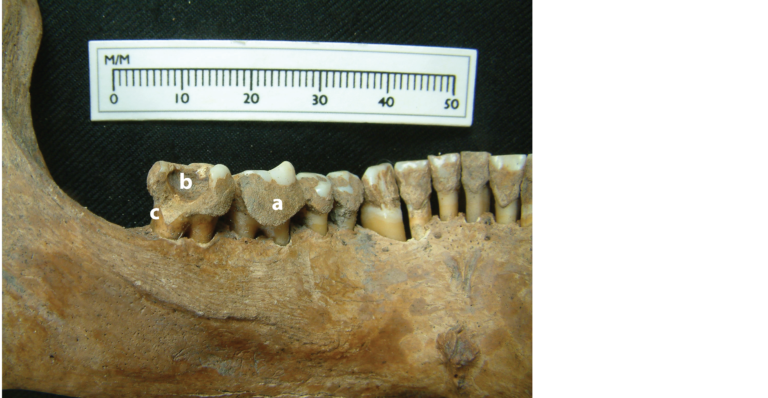 Heavy deposits of calculus or mineralised dental plaque (a) on the lower left teeth of Skeleton 22 suggesting any oral hygiene practiced was ineffective. His second molar tooth had a large cavity (b) with an associated fracture (c) © Anwen Caffell, Durham University

All the men from Palace Green had tartar on their teeth. Starch granules identified as wheat, barley and rye and heavily boiled vegetables, perhaps cabbage or kale, are evidence for the eating of cereals and leafy greens (plant leaves eaten as vegetables). Soil, probably from poorly washed food, was also present, as well as microscopic particles of charcoal and soot. These individuals were probably exposed to smoky environments but burnt debris could also have entered their mouths if they smoked tobacco in clay pipes and even if they ate well-roasted food.

Dental tartar is rich in ancient biomolecules. The majority of the preserved DNA and proteins derive from ancient bacteria, principally plaque-forming bacteria found in the mouth. Even a healthy mouth can host a number of pathogenic (disease-causing) species. In the case of the Palace Green men, a number of bacteria were identified, including those found in gum disease, as well as some infections that take advantage of abnormal conditions and sometimes result in respiratory conditions. 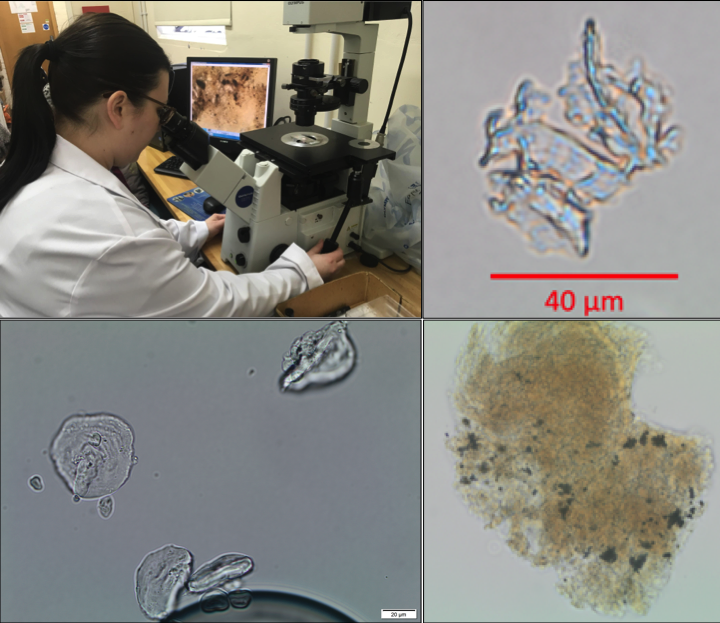 Using advanced chemical analyses, ancient food proteins trapped in the tartar can also be identified, albeit at low frequencies. In this case the food proteins confirmed the consumption of cereals and leafy greens, specifically identifying proteins from oat and wheat, as well as brassica species (vegetables of the cabbage family). Uniquely, the protein analysis also identified the consumption of milk products, which can be difficult to confirm using other lines of archaeological evidence.

Finally, dental plaque also contains minute quantities of the human host’s DNA. Using advanced DNA sequencing technologies, it is possible to recover this genetic information and use it to determine the sex of the skeletons as male or female. The ancient genetic analysis of the Palace Green individuals confirmed that all those with sufficiently preserved DNA in their dental tartar were indeed male.