Skip main navigation
Home / History / Archaeology / Archaeology and the Battle of Dunbar 1650: From the Scottish Battlefield to the New World / The prisoners inside Durham Cathedral

The prisoners inside Durham Cathedral

The Scots prisoners seem to have made efforts to organise themselves in the cramped conditions inside the Cathedral. Scorch marks from burning braziers are still visible around the walls and particularly along the aisles of the nave and south transept. The prisoners may have used the colder east end as their toilet. The evidence for this is the many oily patches which appeared on the paving stone floor of the Cathedral after underfloor heating was laid in 1967. This was identified as magnesium nitrate whose most likely source is nitrogen-rich urine excreted by the confined Scots soldiers. The patches (shown in yellow below on the plan) were especially concentrated in the transepts, the choir aisles and the east end of the Cathedral. 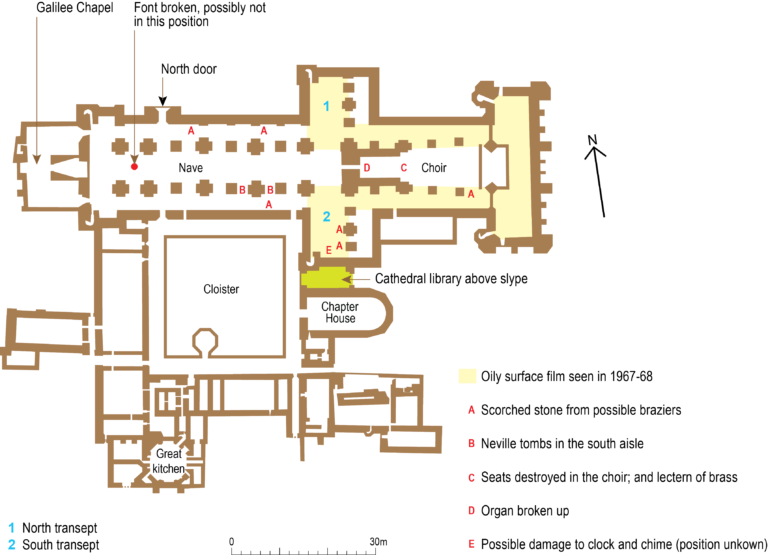 There is no evidence at present to suggest that the prisoners found their way into the cloister of the Cathedral and the Galilee Chapel at the west end was presumably sealed off otherwise damage or at least graffiti might be expected there (see map above for locations). A contemporary account by the Library keeper, Isaac Gilpin, suggests some manuscripts had to be removed: the Scotch prisoners having got into the next room, and with 24 hours afterwards into the Library, and spoiled and burned whatever they found there. There is a wooden stair today from the slype (formerly a narrow covered passageway into the cloister), which can be accessed through a door in the south wall of the south transept. In addition, the south-eastern turret provides access to spaces above the central crossing. If the prisoners broke through this door, or indeed through any of the other five ground-floor doors to staircases rising up into the towers, they could have gained access, at least temporarily, to almost any unsecured space around the cloister.

Sometimes the later antiquarian records make it difficult to disentangle references to damage inflicted by the Scots as an occupying force in Durham in the 1640s (for example to the Cathedral organs), and damage caused by the Scots as prisoners in 1650. It is commonly claimed that the Scots disfigured the two Neville tombs in the south aisle of the Cathedral as an act of Calvinist iconoclasm or anti-English sentiment to revenge the memory of the Scots defeat at the Battle of Neville’s Cross in 1346. These claims are repeated in all the fictional accounts of the Scots imprisonment. However, a great deal of ‘image-stripping’ did take place earlier in the Reformation under the 16th-century Puritan Dean of the Cathedral, and it may be doubted how much damage prisoners who were stripped of their weaponry could actually inflict on stonework, even the softer alabaster used to sculpt the Neville tombs. The font was another Cathedral fixture destroyed at some point during this period by unknown hands.

It seems far more likely that the Scots did strip out the woodwork inside the Cathedral, especially when other fuel began to ran short. A chapter meeting of 3rd November 1660 reported that there were almost noe seats in the Quire while another document says that the Scots burned upp all the wood worke in regard they had noe Coales allowed them. 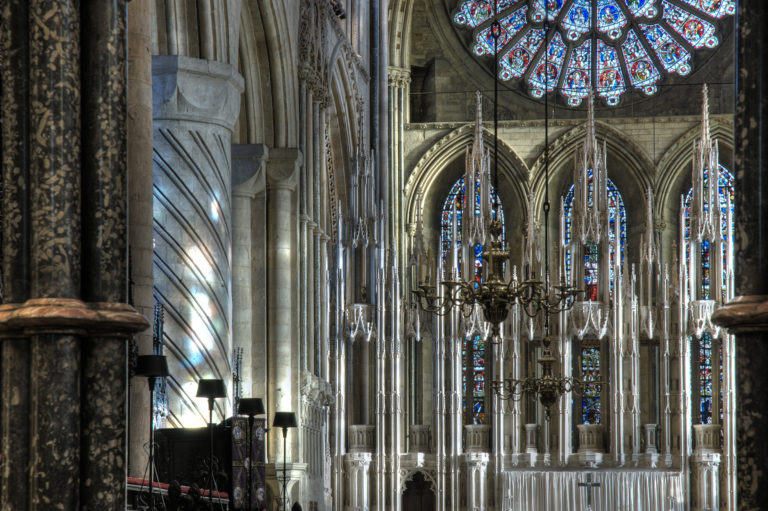 One key element in historical narratives is that the Scots spared Prior Castell‘s clock (first constructed 1494-1519) because it has a thistle, the national emblem of Scotland, carved into its casing. The Hunter manuscript of the Rites of Durham, dating to 1655 or 1656, is quite clear on this point however:

But in the yeare 1650: this Abbey churc[h] was made a prison for the Scotts and quite defaced w(i)thin, for ther(e) was to the Number 4500 w(hi)ch most of them perished and dyed ther(e) in a very short space and were thrown into holes by great numbers together in a moste Lamentable manner; But in the yeare 1655 the Clocke and Chyme was repayred againe w(hi)ch was taken downe and preserved from the s(ai)d ruyne.

The clock, it would seem, was never there at all while the Scots were imprisoned in the Cathedral.