Find out more
Home / History / Archaeology / Archaeology and the Battle of Dunbar 1650: From the Scottish Battlefield to the New World / The UK diaspora

On the 10th September 1650, even before the men had arrived in Durham, the Council of State had allowed Haselrigge to dispose of so many as he conceives he may to the work of the coal mines. This unknown number of men may well have been sent to mines previously confiscated by Haselrigge himself. Indeed, given the substantial and growing investment in coal mining in Fife and the Lothians in the 17th century, some of the Dunbar men may have been experienced coal workers. Since miners were tied by law to their occupation, the landowner could have compelled them to serve in the Scottish army.

In his letter of the 31st October 1650 (see next Step 4.2) Haselrigge reports that 40 prisoners had been sent to the saltpans at Shields (North and South). This was a large-scale and profitable operation which employed more than 750 people and produced around 15% of the total national output of salt in 1635. The tidal range and low beach profile of the River Tyne were particularly well suited to salt production but more important still was the convenience of bulk transport by sea and the availability of ‘small’ coal or ‘pancoal’ for fuel, a by-product of the north-east’s coal mines which was otherwise difficult to sell. 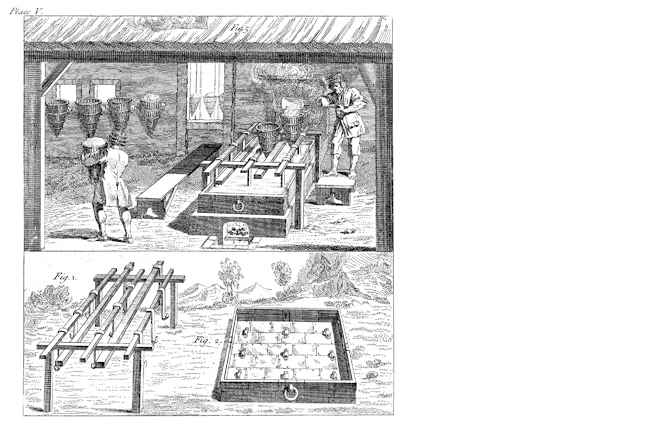 Salt-making as illustrated by William Brownrigg in his ‘The art of making common salt’, Plate V, published in 1748. The upper illustration shows the panhouse. Most of the brine has already been collected from the shallow iron pan above the furnace and the baskets of salt are now being left to drain above the pan before this new strengthened brine is crystallised. The basket support bench and iron pan are detailed below. Public domain, Internet Archive.

There may well have been knowledgeable salt-workers among the captured soldiers from Dunbar. Scottish salt enjoyed a good reputation in the 17th century and most of the estates from which soldiers were recruited on the Forth side of Fife owned salt pans. Salt workers were subjected to almost continual smoke inhalation from burning coal and either this occupation or coal mining could explain the sinusitis and sooting we observed in Steps 2.3 and 2.11. So terrible was the smoke from the Shields saltworks that one person complained it had caused the grass to die and that not a leaf was left upon the hedges. Another commented that Here is such a cloud of smoke as amongst these works you cannot see to walk.

In addition to these saltworkers, around 40 prisoners were distributed as general labourers, but exactly how they were restrained from returning home to Scotland is not known, nor is it established how long they stayed in the region. Twelve men, presumably themselves weavers, were also put to work to establish a ‘Scotch-cloth’ linen industry. In the 17th century the making of coarse woollens was common across Scotland and east-coast Scottish ports traded in the Baltic where there was a market for plaid (a cloth made with a tartan pattern). In this context the skeletons from Palace Green with notched teeth (Step 2.6) might perhaps be identified as a group of recruits drawn from the Scottish textile industry. The basics of hand-loom weaving for linens could be learned quickly and this was a task usually carried out by young men. On the other hand, the grooves might be linked to the repairing of nets for fishing or even line-fishing. Many Scots regiments were raised from fishing communities (even if they didn’t eat much fish!). Of course, most fishermen were crofters and part-time farmers as well, so making twine for binding crop or hay stooks (stacks) is also a possible explanation.

Who took the decisions as to where the men were sent? Cromwell did make some suggestions of his own soon after the battle, thinking that some might go to King’s Lynn in Norfolk (to serve on drainage projects) and others to Chester in Cheshire (and then on to Ireland in military service), but his first priority was to move the fittest of the Covenanters south and away from the scene of the conflict where they would no longer be a threat to English forces and where provisions would be sufficient. As he wrote himself on the 6th September 1650: we can find no way how to dispose of these Prisoners that will be consisting [consistent] with these two ends: to wit, the not losing them and the not starving them, neither of which we willingly incur. Thereafter, Cromwell left all the decisions to the Council of State in London and asked Haselrigge to take care of local arrangements for escorting his ‘Northern Guests’, as he referred to them.

The Council of State, for its part, also looked out for suggestions (including transportation) and passed them on to Haselrigge. As we have seen in Step 3.12, Haselrigge was largely unable to comply with their demands because of the mounting numbers of dead in Durham. As the Council of State made clear on the 19th September 1650 with respect to the process behind transportation, ‘letters’ would be prepared for Sir Arthur Hesilrigge according to such desires as shall be made by any who will carry them. Although Haselrigge did not himself choose prisoners for the tasks specified, indeed he may well never have set foot in the Cathedral, ultimately it was he who moderated and enacted the decisions taken in Whitehall.