Skip main navigation
Home / History / Archaeology / Archaeology and the Battle of Dunbar 1650: From the Scottish Battlefield to the New World / Displaying human remains

In the UK, the Government’s Department for Digital, Culture, Media and Sport (DCMS) advises museums about the display of human remains. They call for both respect for the diversity of beliefs surrounding human remains, and the recognition of the value of the scientific information that can be gathered from studying the remains. The guidelines state that there should always be a sufficient sense of purpose (education), interpretation and explanation for visitors. Above all, displays should be done tactfully and with respect; accompanying text panels should contextualize the skeleton, and clear signposting should give visitors the opportunity not to view real skeletons if they would prefer not to do so.

Our Scottish Soldiers exhibition sought to follow the DCMS guidelines closely and reflected the sensitivities and respect towards human remains felt by the project team.

If we decide that human remains should be on display, the next question is how that should be done. Many surveys of museum visitors indicate that the public do want to view human remains in museums. In recent feedback on a travelling exhibition, Skeleton Science, it was clear that visitors wish to see real skeletons rather than 3D printed ones (‘we feel cheated if it is not a real skeleton’). In the case of the Scottish soldiers it was decided to 3D print one of the skeletons for display, a print that would sit alongside a real skeleton from another archaeological site. In that way, we satisfied visitors who wished to see human remains, and mitigated the fact that the Scottish soldiers’ skeletons had been reburied by the time the exhibition opened and thus were not available for display. In addition the reconstructed face of the 3D printed skeleton was also displayed. 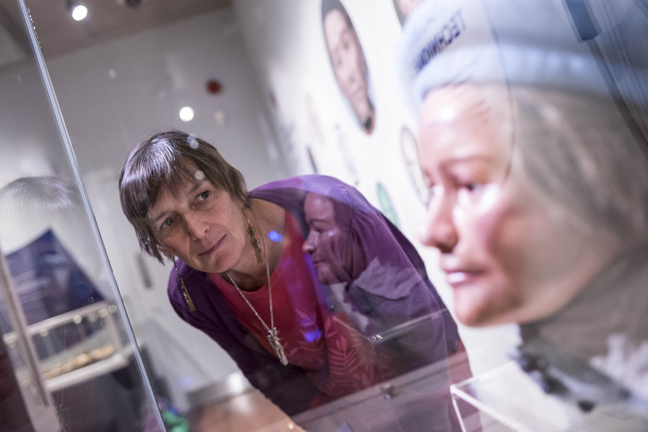 Photograph courtesy of The Bigger Picture.

While the display of skeletons provides information about the value of studying human remains, it is always important to show how they provide a voice to the past and contribute to our understanding of local, national and international histories.