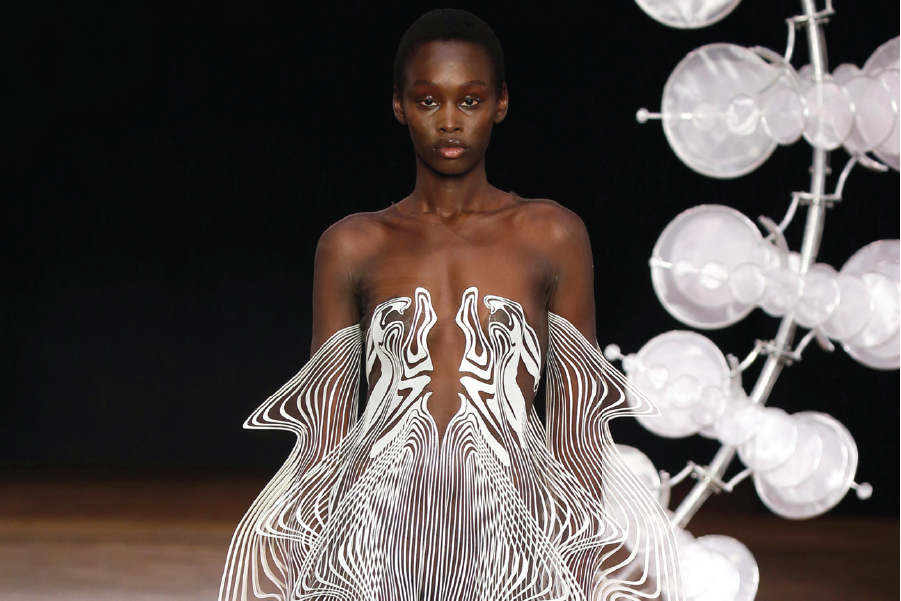 Fashion is often characterized by its association with change. It may also be understood as an agent of change.

Although scholars and academics have debated and proposed competing theories and models over many years to try to explain the processes and motives for fashion change, the ephemeral nature and essence of fashion continue to stimulate academic and popular discourse. The nineteenth-century English sociologist and philosopher Herbert Spencer suggested that body modification and ornamentation constituted early forms of dress that served as trophies, thereby asserting humans’ supremacy over the animal kingdom.

In turn, this imbued early forms of dress with symbolic meaning, rank, and social position that could be understood as an evolutionary progression of fashion change. Spencer saw fashion as an act of conformity with an imperative to keep up with the ruling classes. The German sociologist Georg Simmel viewed fashion change as a process of imitation rather than an evolutionary process where clothing is more of a decorative impulse and a way of standing out or apart that is both a way of ‘looking’ and a way of ‘being’.

It is worth mentioning at this point that although fashion does change this doesn’t mean that it is always new. In one of his theoretical discourses, Simmel asserted that emulation leads to imitation rather than any type of linear evolution and through the process of imitation styles gain social equalization. This in turn acts as an agent for further differentiation and in this way fashion change may be understood as cyclic. Simmel’s theory also proposed that fashion originates from an elite social class, and while it unites one class it also intentionally excludes others that aspire to emulate the elite. In this way fashion requires societal differentiation; however, when subordinate groups imitate the elite, the elite abandons the original fashion in favor of a newer fashion.

Simmel’s contribution to ideas of fashion change has informed subsequent historical and marketing theories about cyclical fashion, including the ‘trickle-down’ theory in fashion. In this theoretical model, conspicuous consumption is usually represented by haute couture as the elite high fashion, attainable only to a privileged few.

Mass-produced versions or ‘copies’ of high fashion represent imitation and could be explained as emulation by a subordinate group for wider consumption. The ‘copies’, however, remained differentiated from the original elite fashion. In Thorstein Veblen’s late-nineteenth-century economic study The Theory of the Leisure Class, he refers to conspicuous consumption and built-in obsolescence as a means of economic expression and an index of wealth. For Veblen, being fashionable was a moral concern as it was essentially about being wasteful in a pecuniary culture that relied on divisions of labor and gender inequalities in the role of fashion. More recent studies looking at fashion change have included the significance of ‘novelty’ as well as critiques on the origins of clothing like those by the notable dress historian James Laver who built on some aspects of Veblen’s work to classify his three principles of hierarchy, utility, and seduction.

However, Laver’s principles have been challenged by contemporary theorists and scholars who continue to test established and historical theories of fashion change in a contemporary fashion landscape that is rapidly shifting and reshaping itself in the face of disruptive forces and technologies, including the rise of digital platforms and economies as well as ethical and sustainable models of fashion production and consumption.