Introduction to metabolism and bioenergetics

Metabolism is central to all cellular life. The video describes the cellular and molecular changes that deliver energy for organisms through different pathways. It highlights two of the most fundamental processes, photosynthesis and cellular respiration.

Focusing on respiration, the video describes how electrons pass along the respiratory chain from one protein to the next and generate a proton gradient across the mitochondrial membrane. As protons move back into the mitochondrial matrix in a process known as chemiosmosis, the molecular machine known as ATP synthase generates ATP. Professor Sir John Walker was one of the researchers who discovered the structure of ATP synthase, winning the Nobel Prize in Chemistry for this research in 1997. Through further studies a detailed understanding of the structure and function of ATP synthase has been obtained – an example of this can be viewed in our Gallery of Molecules.

Professor Walker’s research group have also prepared some beautiful animations that illustrate how ATP synthase functions at a molecular level. They illustrate the function and assembly of the mitochondrial ATP synthase.
(To see each animation at its best, you need to click on the “play” button and then make the video full screen, or click on its link in Youtube.) 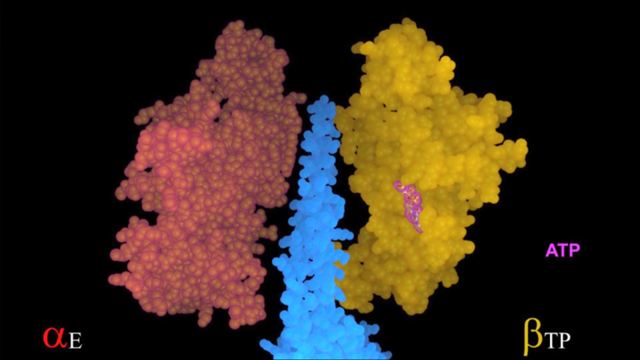 Endergonic reactions are ones in which energy is absorbed from the surroundings. In simple terms, it takes more energy to start the reaction than what is obtained out of it, so the total energy change is a negative net result.

Exergonic reactions are ones in which a positive flow of energy is released to the surroundings. In simple terms, more energy is obtained out of the reaction that is required to start it, so the total energy change is a positive net result.

Cellular respiration refers to sets of metabolic reactions that take place in the cells of organisms to convert biochemical energy from nutrients into cellular energy, with the release of waste products. Nutrients that are commonly used in respiration include sugars, amino acids and fatty acids. The most common oxidizing agent used as an electron acceptor in respiration is molecular oxygen (O2), though some organisms can use other chemicals as their final electron acceptor.