Skilled Black Tudors in the Silk, Cloth and Needle Crafts

In this article Dr. Miranda Kaufmann examines the background to the story of Reasonable Blackman the Silk Weaver. 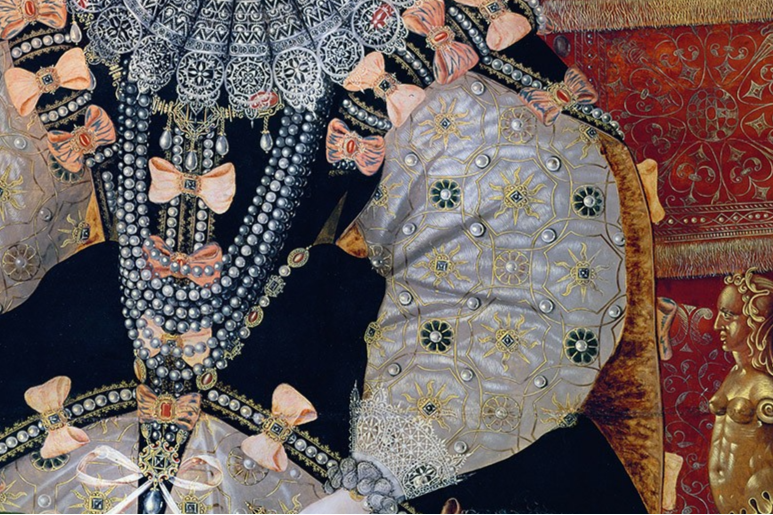 Now you’ve been introduced to Reasonable Blackman, we’ll look in more detail at the background to his story. This will allow us to examine some of the following questions:

We’ve seen that when we first meet Reasonable Blackman through traces in Tudor parish records, he is living in Southwark outside the city of London. He and his family lived in a deprived area with many migrants, but there is also evidence this was a lively and thriving skilled artisan community.

We know from the parish records that in 1579 he and his family lived to the south of the River Thames, in ‘West Side’, which lay in St. Saviour’s parish in Southwark, near what is now Southwark Cathedral. By 1587 they lived in the neighbouring parish of St. Olave’s, Tooley Street.

The Tudor Silk Trade in Southwark

As a skilled silk weaver, Reasonable Blackman was fortunate to work in a flourishing and expanding craft and business.

Silk weaving was a new and expanding industry in Elizabethan London. Evidence shows that imports of raw silk increased substantially between 1560 and 1593.

The art of silk weaving originated in China and had expanded from there, along the ‘Silk Roads’ through Asia and North Africa. Moors from Tunis and Fez brought the trade to Spain in 712. It reached Italy in the 13th century, only latterly emerging in France and the Netherlands in the 15th century and very belatedly arriving in London.

In the Tudor period, elegant silk clothing was highly sought after by aristocracy and gentry as a statement of status. Silk would also be used in costumes for the Rose Theatre which was based nearby in Southwark.

Records exist from 1561 of the gift of a pair of silk stockings to Elizabeth 1st and her delight at receiving this elegant innovation. We also see references to silk in Shakespeare’s plays such as Othello’s silk handkerchief from Africa.

Sumptuary laws, a kind of Tudor ‘dress code’ based on economic status existed at the time. These prohibited those with lower status from wearing silk. But in practice the laws were hard to enforce and silk was also often worn as an aspirational statement by others outside the gentry classes.

The Netherlands, Africa, and the Silk Trade

What can Reasonable Blackman’s work as a silk weaver tell us about his background and origins?

In the Tudor period, many silk weavers came to London from the Netherlands – it’s a possibility that Reasonable Blackman came to London through this route.

Antwerp was a leading centre of the silk industry from the 1530s. By 1584, around four thousand workers were employed in the silk industry. Antwerp silk weavers produced a wide range of different silks, including satin, damask, taffeta, velvet and armoisin.

The Netherlands had strong trade connections to Africa via Spain and Portugal. In Europe, Antwerp was second only to Lisbon in the numbers of Africans living in the city.

Antwerp’s position in the silk industry started to be challenged, however after the Dutch revolt against Spanish rule in 1568 initiated 80 years of war.

The close connection of the silk trade to the Netherlands, the many Flemish silk weavers in Southwark, and the known Black presence in Antwerp, suggest that Reasonable Blackman may have come to London through this route.

Other Africans in the Cloth Industry

Blackman was not the only African working in the Tudor cloth industry. Another independent craftsman working during the reign of Mary I (1553-1558) ‘made fine Spanish needles in Cheapside, but would never teach his art to any’.

In St. Botolph Aldgate in the 1590s, one Simon Valencia ‘a black moore’ (who surname suggests he also came via Spain) worked for a needlemaker named Stephen Drifield, and a Moroccan woman named Mary Fillis, who we will learn more about in Week 5, worked for a seamstress named Millicent Porter.

There is a tantalising record that suggests Reasonable’s son Edward carried on his father’s trade. On 6th March 1614, when Edward Blackman would have been 27, one ‘Edward Blackmore of Mile End, silkweaver’ married ‘Jeane Colle of Stepney’.

She may have been the ‘Jane Colle’, daughter of William Colle, who was baptised at St. Olave’s, Tooley Street in 1590, making her three years younger than Edward. Mile End was only three miles from Southwark, and on the edge of Spitalfields, which would become the centre of London’s silk weaving industry later in the 17th century.

At the beginning of the week, we looked at the idea of ‘free soil’ in Tudor England. We also looked at the importance of wages or independent work as an indication of status.

Lien Luu (2010) Immigrants and the Diffusion of Skills in Early Modern London: the Case of Silk Weaving, in ‘Documents pour l’Histoire des Techniques’