This article discusses the use of eucharistic imagery in the Book of Kells.
View transcript
5.2
Vines, grapes, and chalices are found together in the Book of Kells. The chalices are often shown with vines spilling out of them. These vines are life-giving. They sprout grapes, which we see being consumed sometimes by lions, sometimes by peacocks.
29.4
One good example is found on folio 27v just before the Gospel of Matthew. In the corner at the top right on the lower left, you will see a chalice sprouting vine shoots. These shoots are being consumed by peacocks. In this way, symbols for the Eucharist, the chalice and the vine, are linked with a symbol for the risen Christ and eternal life – the peacock.
64.1
A particularly beautiful example of a living vine is to be found on the Tower Cross at Kells.
72.6
On folio 201v, we see a figure holding a chalice. He is sitting above the name of Abraham, the founding father of the Jewish people, on a page which has the family tree of Jesus.
91.5
In the last chapter of Luke’s gospel, chapter 24, where it speaks of the women going to the empty tomb of Jesus Christ, the Kells artists again show life-giving vines. We can see a blue chalice in the top border with vines spilling out, multiplying as they go around the border of the page.
116.2
Looking carefully at either side of the chalice, you can see two lions feeding on three grapes – a trinity of grapes, one might say. Here we have chalice, vines, and lions. It is in the combining of images that we can best read the message of this Gospel Book of Kells.
145.4
If we look at folio 188r, we read the word “Quoniam,” which means “for as much as.” We see the letter Q covers over half the page.
160.1
At the bottom right of the word “Quoniam,” we see a seated figure dressed in a green robe. He holds a chalice. Perhaps he’s sharing the Eucharistic wine with the other people intertwined among the letters here. Let us now look at Eucharistic bread. Remember that at the time of the manuscript’s composition around 800, as now in the 21st century, Christians usually received the Eucharistic bread in the form of a Communion host, a small, circular wafer of bread often with a cross on it. There is a lovely image of the host in folio 34r.
208.9
This page is often known as the Chi Rho page. At the bottom on the left, we find two mice playing with what many identify as a Eucharistic host.
223.4
Another wonderful depiction of the host is in portfolio 32v. This is a full-page image of Christ holding a Gospel book. Christ’s lovely head of curls is flanked by peacocks, symbols of resurrection. On the peacocks’ wings are Eucharistic hosts. The peacocks’ gaze is directing our attention to the host.
253.9
On either side of Christ’s shoulders we see two chalices – one with a vine of grapes flowing from it, the other fruiting with olives. The grapes remind us of the Eucharistic wine, the olives of the oil which anointed Christ. Christus means “the anointed one.” This anointing is shared with all Christians as followers of Christ. The feet of the peacocks are entwined in the vines.
295.8
The combination of images enriches the meaning. On this page, we have Eucharistic host, vine, grapes, olives, chalice, peacocks.
312
The Eucharist makes Christians one with Christ. As we might say, it speaks of communion with Christ. Eucharist leads to eternal life with Christ. This is a central theological message of the Book of Kells.

There are two key sacraments central to Christianity – Baptism and the Eucharist. Sacraments are understood as key moments where a person enters into closer union with God. They are events to be celebrated. Baptism takes place once in a lifetime, when a person becomes a Christian, while the Eucharist is celebrated regularly throughout the life of a Christian. Some people call this celebration ‘the Mass’, some ‘Communion’, others the Lord’s Supper. The Book of Kells was created in an environment where people had deep faith in the Eucharist. The people living in the Christian settlements at Iona and Kells would have celebrated the Eucharist regularly. The Eucharist, they believed, was the spiritual nourishment enabling them to live their daily lives, and at once the food which gifted them with eternal life. The word Eucharist comes from the Greek word for thanksgiving, Eucharistia. When Christians gather to celebrate the Eucharist they gather to give thanks to God for the life of Jesus Christ and the promise of everlasting life with God in heaven. The Eucharistic ritual itself is based around the last meal that Jesus shared with his followers, and on the words that he used. We find this last supper described in the gospels of Matthew (Chapter 26), Mark (Chapter 14), and Luke (Chapter 22). In these gospels we read that bread and wine were used. Christians continue to use bread and wine in their Eucharistic celebrations. Bread, in form of a small communion host with a cross on it, and wine, represented by a chalice (cup) are two of the key Eucharistic symbols found in the Book of Kells. Associated with wine is the image of vines. In the Gospel of John, Jesus Christ describes himself as the vine and his Father as the vine grower (John 15). Images of vines are found throughout the Book of Kells. These vines produce the grapes from which the wine is made. This is the wine which fills the chalices for the Eucharistic celebration. Christians will drink from these chalices. Vines, grapes and chalices are frequently found together in the Book of Kells. Chalices are often shown with vines spilling out of them. 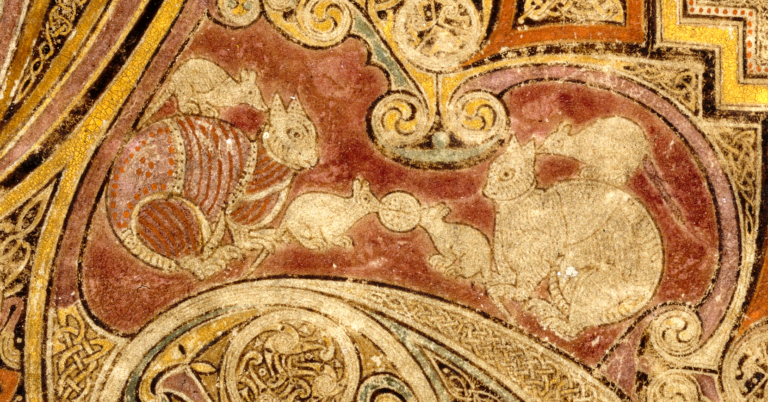 Fig 1. Detail from the Book of Kells (fol. 34r). © The Board of Trinity College, University of Dublin. Two mice holding the host in their mouths.