We have learned so far that the sleep of a healthy individual is divided into two different types – REM and non-REM sleep. What we will now consider is the complexities of non-REM sleep and its multiple stages.

Non-REM sleep consists of several different sleep stages (N1, N2, and N3) each characterised by a specific pattern of brain activity reflecting sleep depth. All stages of sleep (N1, N2, N3, REM) typically occur across a cycle of 50 minutes for infants and toddlers, and 90-110 minutes for older children and adults, repeating multiple times throughout the night. As we learned previously, the distribution of REM and non-REM sleep varies across a person’s lifetime. It is also important to note that the time spent in each stage varies from person to person, and across the night.

N1 sleep is generally referred to as light sleep, marking the transition from wakefulness to sleep. It is determined by the presence of low amplitude, mixed frequency EEG, mainly occurring between 6-8 Hz in what is called the theta waveband. This pattern of brain activity is accompanied by a notable decrease in muscle tone (as compared to waking states) and slow rolling eye movements, which are present as a person begins to fall asleep. At this stage, thoughts begin to lose logical coherence, and individuals may also experience what we call ‘hypnic jerks’ (also known as “sleep starts”). These involuntary muscle twitches are responsible for the sensation of falling (and subsequent jolting awake) that you may experience when drifting off to sleep.

The EEG of N2 sleep mainly occurs across a frequency range of 4-7 Hz in the theta waveband, and is accompanied by a similar decrease in muscle tone as in N1, as well as reduced heart rate, lowered core body temperature, and no eye movements. Most importantly, N2 sleep is typified by distinct bursts of brain activity, known as K-complexes and sleep spindles.

A K-complex is a high amplitude negative wave, followed by a high voltage positive slow wave, first occurring after 6 months of age. Sleep spindles are spurts of high amplitude, high frequency waves, first occurring after 4 weeks of age. Sleep spindles are caused by interactions between neurons in the brain – specifically around the areas of the thalamus and cortex. They operate at varying frequencies between 9-16 Hz, however mainly occur at 12-14 Hz. The parts of the brain involved in the creation and formation of sleep spindles changes as a person ages. Spindles occurring in the frontal region of the brain are more evident in younger children, but decrease dramatically at around 13 years of age. Contrastingly, spindles operating in the centroparietal brain region maintain a steady presence throughout life.

N3 sleep is considered to be deepest stage of sleep. The EEG of N3 consists of high amplitude, low frequency waves of brain activity, mainly in the delta waveband (0 – 4 Hz). Due to these large, slow waves, N3 is commonly referred to as Slow Wave Sleep (SWS). Whilst the EEG of N3 is characteristically different to that of N2, similarities occur in the occasional presence of sleep spindles, and decreased heart rate and core body temperature. Contrasting to earlier stages of sleep, N3 has a high arousal threshold, meaning that it is difficult to wake someone from this stage of sleep. The amount of time spent in N3 is greatest in early childhood, reducing in length as we grow older.

In contrast to the stages of non-REM sleep, during REM sleep there is an increase in the firing rate of most neurons throughout the brain. Due to this, patterns of brain activity during REM sleep consist of mixed frequency EEG activity, similar to that seen during wakefulness. In addition, there is muscle atonia (or paralysis of the muscles) as well as rapid episodic bursts of eye movements that occur. Interestingly, this inhibition of muscle activity is not fully developed in newborns until approximately 6 months of age, which can result in dramatic twitches and movements of an infant’s limbs, sometimes strong enough to wake the child up from sleep. 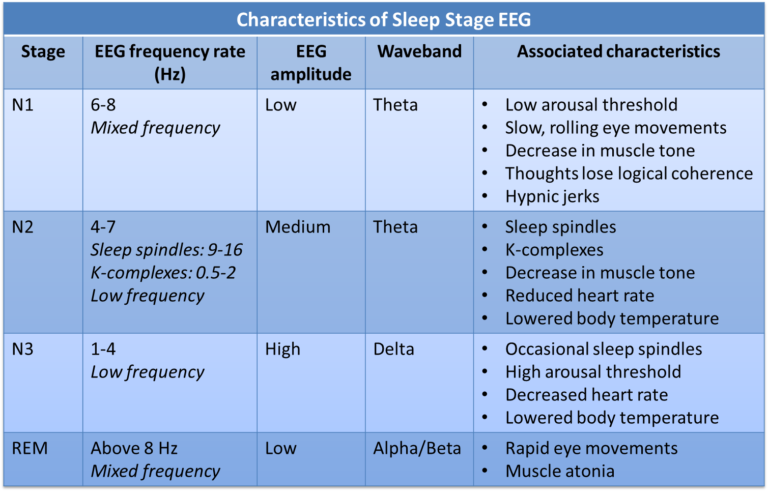