In this article, Professor David Brayshaw explains how the different components of the climate system affect predictability.

When using climate information (or data) to anticipate future conditions, it’s important to understand both the type and the source of the prediction methods that have been applied. It’s helpful to think about predictability as one of two broad types which derive from either:

• the initial conditions – knowledge about the current climate state; or

• changes in the boundary conditions – knowledge about how the parameters controlling the overall climate will change.

Watch the video above which illustrates these two concepts.

Opportunities and challenges in predicting climate

As discussed in the video, the climate system contains components that evolve over time-scales much longer than the lead time of the prediction sought.

Some key components of the climate system and an indication of the timescales over which they evolve. Click to expand.

These slowly evolving components introduce both opportunities and challenges for predicting climate.

Type I – initial condition – predictability in the atmosphere (or more accurately, the troposphere) has been used for a long time in weather forecasting for the next few days ahead. Recently however, Type I predictions that use the initial condition predictability arising from slower evolving climate components have produced skilful predictions of atmospheric evolution over timescales of weeks, months, or even years 2,3. A well studied example of this is the connection between the stratospheric (upper atmosphere) and tropospheric (lower atmosphere) circulation. In effect, changes in the stratosphere (evolving on timescales of months) leave an imprint on European winter weather patterns (which typically vary on a more rapid, day-to-day basis). Therefore, if a particular behaviour is seen in the winter stratosphere on day 1, there is a statistical link to surface weather behaviour which will be observed over the next few months 4 . Some surface weather features will become more likely and others less likely following the stratospheric event.

There is compelling physical evidence for many such ‘slow’ connections operating in the climate system and they are associated with a wide range of physical phenomena across diverse geographic regions. In most cases, however, the predictions that arise from these relationships are modest and inherently probabilistic. In other words, the existence of a connection does not necessarily mean that an event will happen but it may it more likely. This uncertainty is important to understand and is explored in more detail later this week.

Imagine a scenario where Type 0 predictability is used to estimate the average temperature at a particular location under current climate conditions. If there are no ‘slow’ variations in the location’s climate (ie, temperature varies day-to-day but each year contains an equally good mix of warm and cold days), then a sample of few years of climate data would probably be sufficient to reliably estimate the average temperature (this estimate might then become our Type 0 ‘climatological’ forecast for subsequent temperatures at this location). However, if the climate at this location does vary from decade to decade (ie, some decades contain an unusually high number of warm days), then a sample of at least a few decades is needed: any shorter sample could lead to an estimate which is much warmer or colder than the true long-term average. And, if now we imagine a scenario where Type II prediction is used (eg, when seeking to estimate the change in climate due to a ‘forcing’ from increased greenhouse gas concentrations), the changes in climate produced by the forcing may be either obscured or exacerbated by the action of the variations caused by the ‘slow’ climate component. An illustration of this is provided in the diagram below. 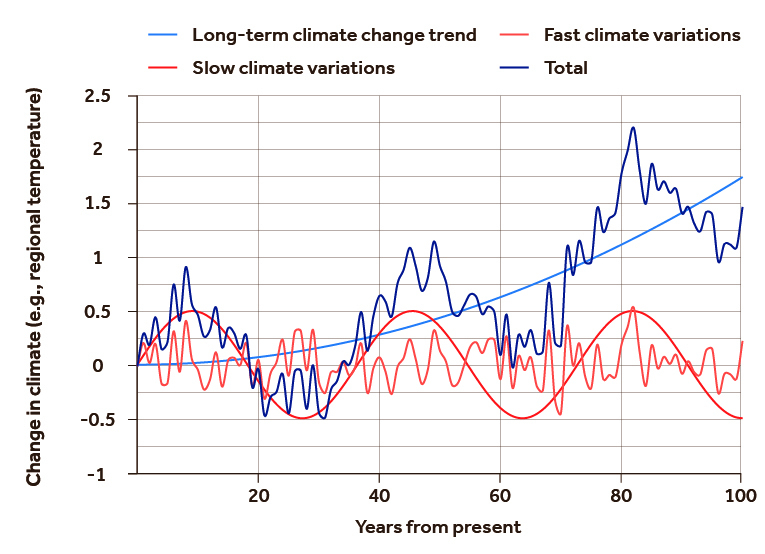 Note this figure is for illustrative purposes only, not real data. Click to expand.

In this imaginary case, a changing climate (dark blue line) is being driven by three ‘ingredients’. The paler blue line shows a forced climate change trend which we might seek to use to form a Type II prediction (eg, due to increased greenhouse gas concentrations); the red line shows a naturally varying ‘slow’ component of the climate system (eg, the near-surface ocean temperatures); and the pale brown line shows the fast varying day-to-day ‘noise’ of the troposphere.

As the slow component has a 30-year timescale, any near-future changes in ‘total’ climate (the dark blue line) over the next 30 years can show markedly different trends to the ‘forced’ climate change signal (the paler blue line). For example, comparing the average climate in years 5-15 with that in years 20-30 would wrongly suggest that there is a negative (downward) long-term trend in temperature (as opposed to the longer-term positive trend indicated by the pale blue line).