Informing farming decisions for the future

Modern technologies allow farmers to make decisions based on empirical data such as temperature and other weather parameters. For example, vintners may choose to base their decision about what grape varieties to plant, on the climatic data previously recorded for the exact location of their vineyard. However, some projects go one step further, by using predictive models of climatic conditions, to help farmers plan and make decisions today to prepare for the future.

Indicators that extend their projection beyond the same year have not been produced for direct application to agriculture, and either relate to a single fixed period far into the future (eg 2050 or 2071-2100) or provide such coarse information they provide little help for decision making in farming.

Currently under development in collaboration with farmers and other ‘end-users’ the Copernicus Climate Change Service (C3S) Agricultural project, translate empirical data into tailored products for the agricultural sector. This innovative system will provide indicators for a wide range of future time periods, to help individual end-users plan their long term crop management strategy.

The C3S agricultural demonstrator a project delivered on behalf of the European Centre for Medium Range Weather Forecasts (ECMWF) by Telespazio VEGA supported by the University of Reading, Telespazio France, University of Molise, eGEOS, UK Met Office and CGI, aims to show how climate model data can be used to understand the future effects of Climate Change on Agriculture.

The ‘Proof of Concept’ phase uses three case studies of woody perennial crops: vineyards in Buzet, France; olive groves in Tuscany, Italy, and beech forests in Molise, Italy. They all require a high initial investment from growers, yield across multiple years, and are likely to be affected by climate change. Agricultural practitioners may need to adapt their approach now, to secure production 10-20 years into the future. 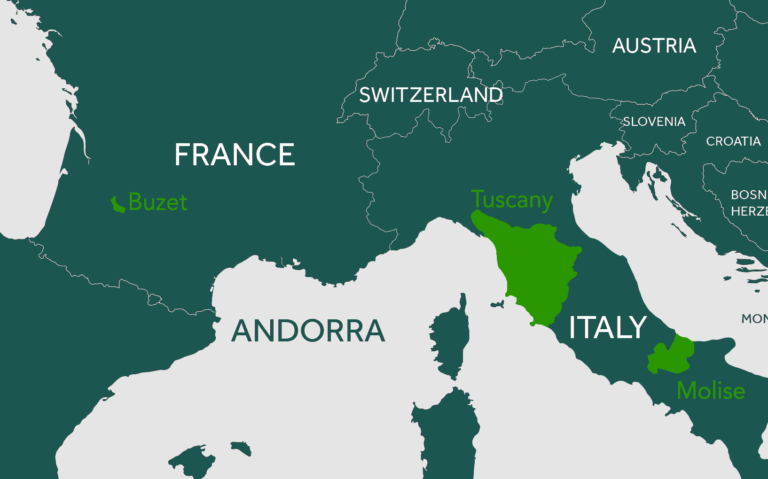 The Buzet wine appellation (an appellation is a geographical indication referring to the local origin of the grapes), Cave Coopérative de Buzet, is located in South-West France and comprises of 180 grape farms, covering an area of 1850 hectares specialising in red wine production. To date, climate change appears to have had an impact on the vines at Buzet, altering the timing of their development, with a clear trend towards earlier harvest dates. Other changes observed over time include, increased wine production and improved wine quality. In recent decades, evidence shows that phenological stages (biological growth stages) have started to occur earlier, with shorter intervals between each stage. Overall these changes have corresponded to an increase in the number of ‘vintage’ (high quality) years and larger yields.

While the changes that have been noted in wine production in Buzet are currently beneficial and in line with consumer preferences, there is a concern that if the trend continues it could result in changes in the typicality of wines from Buzet. In effect this means losing the ‘terroir’, a combination of climate, soil and grape variety. Changes in vine phenology can also be problematic for the management of harvesting and processing operations which may become under- or over-utilised at different times within the season.

During the initial stages of the project, end-users were asked how they perceived projected climate change, and what information they would like to have to help them plan their farming decisions. To address problems relating to vine phenology shifts, breeders stated they would welcome access to data to help them decide when to change the day-length responsiveness of vines, or adapt varieties and genetic material from climates that are analogous to future conditions in Buzet. Based on this information, end-users, such as vineyard owners could adapt by

• planting in cooler areas of their appellation

• changing the dates of pruning

They agreed that maximising the effectiveness of these strategies, relied on having ready access to reliable, detailed information about the local climate within the next 10-50 years.

The C3S agricultural system aims to meet these needs by providing information at appellation scale – end-users rated this finer scale as almost twice as valuable as coarser scales. The system will provide information across multiple 10-year time periods for up to 50 years into the future. End-users felt that receiving information about the date of maturity was the most important metric, followed (in descending order) by ripening, flowering and budburst. End-users also expressed an interest in sharing their own, local weather and crop data to help increase the amount of data entered in the system, and improve the accuracy of the agricultural projections.