In this video, Pete uses a turntable and a ball to simulate the effect of the Coriolis force. The ball is deflected on a curved trajectory, across a rotating surface, to help you visualise a parcel of air moving over the Earth’s surface.

Think about a person standing at the Equator. In the course of a day, the planet rotates once, meaning that you travel a colossal 2π x R (the radius of the Earth – 6370km) = 40,000km through space – a speed of about 1700km/ hr. You don’t notice that you are travelling so fast, because the air around you is travelling at the same speed, so there is no wind. On the other hand, if you are standing at a Pole, all you do in the course of a day is turn around on the spot, you have no speed through space and similarly the air around you is stationary.

Now, think about really fast moving, Tropical air which is being pulled towards the poles by a pressure gradient. As it travels polewards, it moves over ground which is rotating more slowly, and so it overtakes the ground, and looks like it is moving from west to east. Similarly, slow moving polar air will be left behind by the rotating Earth and look like it is moving from east to west if it is pulled equatorward by a pressure difference.

In general, moving air in the Northern hemisphere is deflected to the right by the Coriolis Effect.

As the air blows from high to low pressure the Coriolis force acts on it, diverting it, and we end up with air following the pressure contours and blowing around low pressure in an anticlockwise direction and around high pressure in a clockwise direction (both true only for the Northern Hemisphere). Near the ground, friction slows the air down a bit so that, in practice, the wind does actually blow ever so slightly towards the centre of the depression. 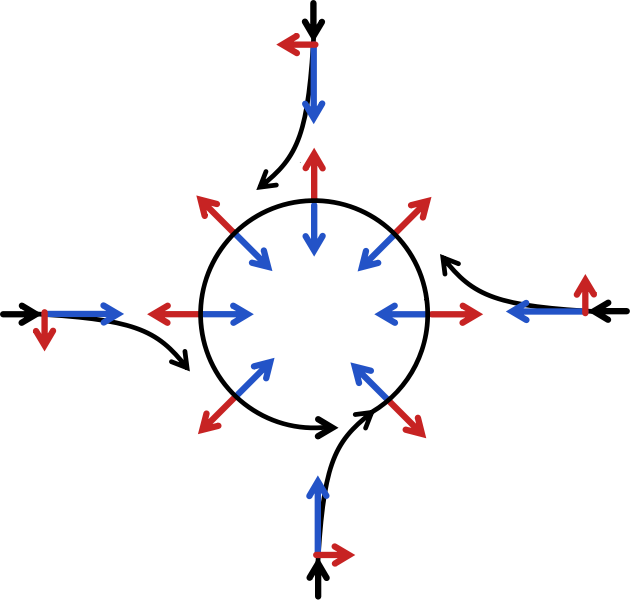 In this diagram, the black arrows show the direction the air is moving in. The Coriolis force pulls the air to the right (red arrows). As the air is being pulled in to the depression by the pressure gradient (blue arrows), it is continuously deflected by the Coriolis Force. When the air moves in a circle around the depression, the Coriolis force (red arrows) is balanced by the pressure gradient force (blue arrows).
In summary, for the Northern Hemisphere:

This weather map, or synoptic chart, is of 24 January 2009 (Figure 3). The paler black lines show the pressure contours or isobars. They are normally drawn at 4hPa (1 hectoPascal is the same as 1 millibar) intervals – 1016, 1012 etc. There are five low pressure areas on the chart, the lowest pressure in a depression is marked with a cross and the pressure at that point is given (L 978). Similarly the centre of any high pressure areas are marked with a cross and the central value given, eg H993.

Note that whether the pressure is High or Low simply depends on whether the pressure around is higher or lower. There is no simple rule, for example, that says ‘everything over 1000hPa is high pressure’. The pressure values in High and Low areas both tend to be higher in the summer than in the winter.

The lowest pressure shown on this chart (Figure 3) is the centre of the Low just off the coast of Iceland (950hPa), but the pressure contours are much closer together around the 963hPa Low in the Bay of Biscay, so it’s that Low which has the faster winds blowing around it.