A case study of orographic rain

We’re now going to show you a case study of orographic rain through a series of different figures including a weather map, satellite image and precipitation map. By looking at these individual elements you can see the effects of orography on the weather in Scotland on a day in September 2013.

Consider this weather map from 2 September 2013. 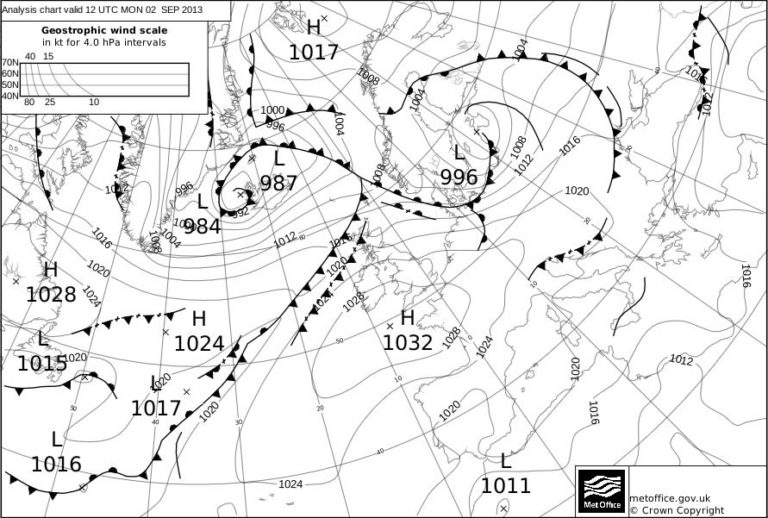 View Course
We know that winds blow along pressure contours and in a clockwise direction around high pressure regions and looking at the 1032mb High, we can tell that westerly winds are affecting much of the UK. In addition, there is a cold front to the west.

Looking at the satellite image above, you can see puffy convective clouds in the Polar Maritime air in the top left of the image and frontal cloud just to the north west of the UK. In addition, you can see orographic cloud over the mountains and hills of Wales, Scotland and northern England where air that was already moist and inclined to rise (through being Polar Maritime) has had an extra push up over the land.

Figure 3: A rainfall map of the UK, which shows that it rained over western Scotland © Crown Copyright, Met Office

The rainfall image above shows that it rained over western Scotland, implying that the air on the downwind, eastern, side of Scotland will be both drier and warmer.

Figure 4: Temperature measurements made around the UK at 3pm GMT on 2 September 2013 © Crown Copyright, Met Office

As a result, the temperature was far warmer on the downwind, eastern side of the mountains (Figure 4).