Every few years a very noticeable change comes about in the temperature of the equatorial Pacific Ocean. The eastern side, which is usually the coolest part, warms up considerably, particularly in the ‘tongue’ of cold water in the equatorial east Pacific seen in Figure 1, whilst temperatures in the west decrease a little. 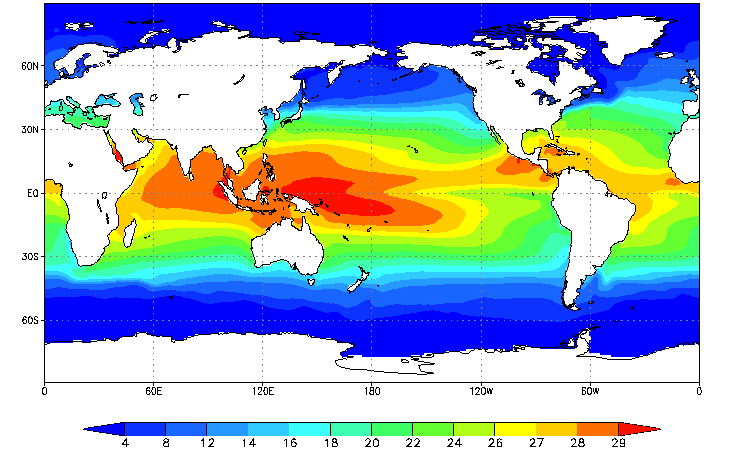 Figure 1: Annual mean sea surface temperature (degrees C), averaged from 1971-2000. Note the very warm water in the tropical west Pacific and the cold “tongue” along the equator in the east Pacific.© US Climate Prediction Center

View Course
The result of this is that the gradient of temperature from east to west decreases. The atmosphere responds to this change with the heaviest rainfall moving out into the centre of the equatorial Pacific and the eastern side of the ocean also becomes much wetter. This shift has a big impact on land regions bordering the equatorial Pacific. Northeast Australia and Indonesia/Papua new Guinea become much drier whilst coastal parts of Peru and northern Chile, which are usually rather dry, experience much more rain.
The increase in ocean temperatures is known as an ‘El Niño’ event and has been known about for well over 100 years. The name, which means ‘the boy child’ in Spanish, derives from the fact that the warming tends to be strongest around Christmas time and was named by the fishermen of Peru. They noticed that, around Christmas every 3-7 years or so the fish stocks in the equatorial Pacific reduced as the water warmed. The opposite phenomenon often occurs the following year when the eastern equatorial Pacific becomes even colder than normal and the west becomes even warmer. This leads to flooding in Indonesia and eastern Australia and drought conditions in Peru and Northern Chile. This state of the ocean is known as ‘La Niña’, or the ‘girl child’.
Both El Niño and La Niña affect weather patterns far beyond the equatorial Pacific as the whole global pattern of winds and precipitation in the atmosphere adjusts to the changes in the Pacific. The southern USA tends to experience wetter winters during El Niño episodes whereas north-eastern Brazil and south-east Africa become drier than normal. Western Canada, south-east Asia and Japan all tend to be warmer than normal during an El Niño event and in fact the average temperature of the atmosphere averaged around the whole globe tends to be higher than normal in the months during and immediately following an El Niño event, as vast amounts of heat are transferred from the ocean into the atmosphere.

The processes in the ocean and atmosphere that control the evolution of El Niño events are complex. If you’d like to learn more about this fascinating phenomenon, the US National Oceanic and Atmospheric Administration (NOAA) Climate Prediction Center (CPC) has an excellent web-based tutorial. You can work through this tutorial yourself to find out much more.