Following on from the previous step, let’s look at a real example of where data has been sensationalised. 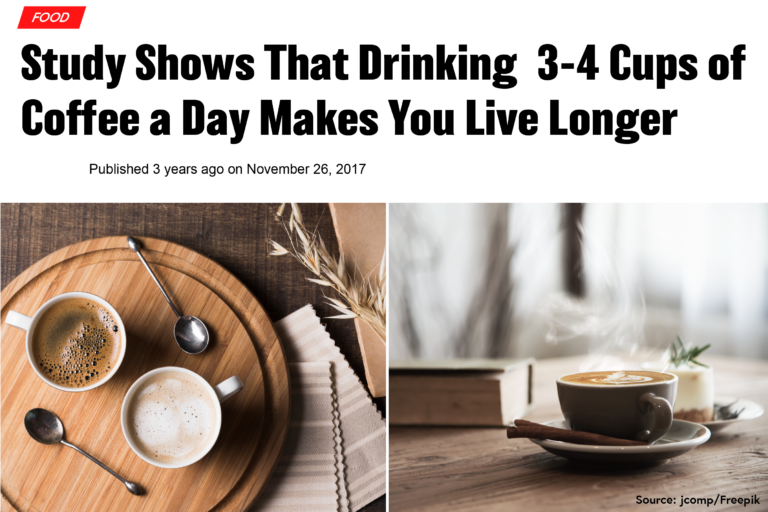 Notice how there is a problem of interpretation in the headline here. While the study showed that people who drank coffee lived, on average, longer than those who didn’t, it’s still quite a big leap to say that by drinking more of it you can extend your life.

The sample size itself was good (521,330 people in 10 countries) and, therefore, representative. There are other studies that have shown this relationship, so there is also replication. The researchers did not appear to be sponsored by a big coffee company like Starbucks, so there seems to be independence.

The study’s actual conclusion was:

These results confirm prior findings on the reduced risk of mortality associated with coffee drinking but additionally show that this relationship does not vary by country where coffee preparation and drinking habits may differ.
(Gunter et al. 2017)

Note the ‘associated with’ rather than ‘caused by’.

Even though the study was well conducted, there were still some holes in the data. For example, the BBC article Coffee Drinkers Live Longer – Perhaps highlighted that the study did not control for socioeconomic status (they didn’t factor in the occupations and income of the people included). Richer people might be healthier and drink more coffee – a possible alternative explanation. So, it’s not an open and shut case.

We can see that looking back at the original evidence, alongside other commentary from good sources, can help us understand the quality of the research and decide for ourselves if the headlines are sensationalist. This kind of critical view will help us in designing our own research and interpreting the results.