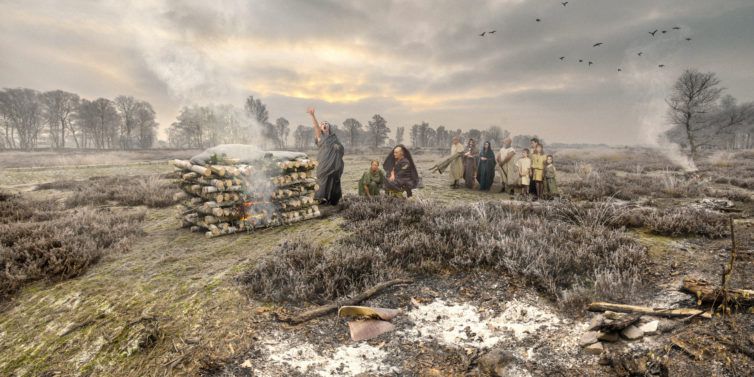 You may be surprised to know that studying the Roman dead reveals a great deal about the behaviours of the living. We can gain a good understanding of Roman ideas around mortality, funerary practices, the process of mourning and remembering the deceased in society. Let’s explore Roman attitudes to death, and how these were reflected in daily and ritual practices.

While mortality is a certainty of life for everyone, most Romans would have experienced death far more frequently and closely than we do today. Death was even a well-known and cherished part of Roman entertainment (in gladiator fights or public punishments) and a common aspect of the landscape (funerary monuments lined the roads leading to and from all major sites). It should therefore come as no surprise that Roman views on mortality were different from modern perspectives. 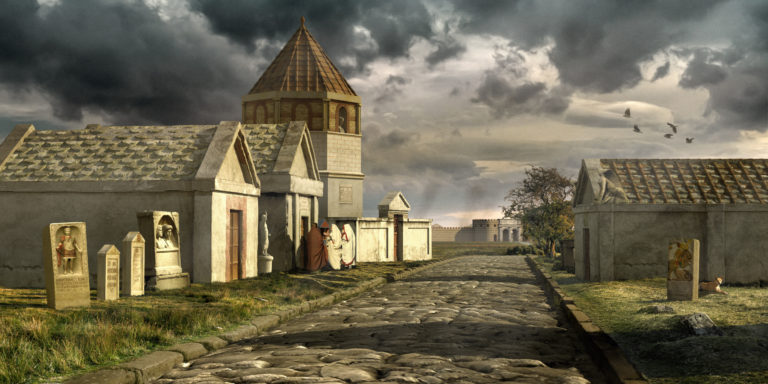 Romans gave considerable importance to wills as well as the construction of funerary monuments, most of which would have been planned and designed during the individual’s lifetime. The focus wouldn’t have been on their death, but on the preservation of their legacy. Tombs and inscriptions were about celebrating life and preserving the memory of the individual and, crucially, their family. They might, for example, commemorate the military career of a soldier, or the life of a mother.

However, it’s very difficult to judge whether these views would have been held by everyone as there is an inevitable skew towards male elites for which we have surviving written sources. Only the wealthy would have been able to afford tombstones and other monuments, and only those who were literate or could pay a stone mason would have been able to erect inscriptions. Unfortunately, when it comes to women, children and the urban poor, we have a limited understanding of the realities of death.

This leads to unanswered questions such as the much-debated view on child mortality in the Roman world. Some argue that due to the high risk of death, parents may not have attached as emotionally to their children, especially babies, as we do today. Yet there is plenty of evidence of parents mourning the death of their infants intensely, with lavish burials and heartfelt inscriptions. Was there a socio-economic divide in the attitudes towards child mortality, and even a gender divide? Did poorer people have a more stoic attitude towards the death of their children because it was more likely to happen and they could not afford to provide the same funerals and mourning rituals? Or is this only representative of the lack of archaeological evidence for the poor, whose suffering leaves no trace?

Grief may be a universal concept but the way it’s expressed is unique to each individual. The same logic must be applied to the Roman world. However, while we can assume that individuals would have had their own ways to mourn their loved ones, there are some general beliefs and practices that were widespread within Roman society.

Though Roman philosophy dictated that grief should be controlled, there were rules for the mourners to express their bereaved status. They would have worn dark clothing and disregarded some of their personal grooming. Men, normally expected to be clean shaven, would have grown out their beards, and women would have worn their hair loose and unwashed. This was a way of wordlessly communicating their grief to others so that society could behave accordingly and give them the appropriate respect.

There were also rules on who should grieve and the length of the mourning period depending on the age and status of the deceased. Again, while these were general rules, they weren’t always reflected in people’s behaviour as we can see from the evidence of parents mourning infants. However, it’s likely that those who were seen to be mourning excessively or not enough were subject to public disparagement. Mourning was also one of the rare occasions where women had an active, public role as they were the ones who carried out the public lamenting (expressing passionate grief) and received the ashes.

Remembering and celebrating the dead was a constant aspect of Roman daily life. It was perhaps the most crucial aspect of death and shaped people’s attitudes towards it. It was both a public and a private duty that all individuals should perform. People returned to a grave and made offerings of wine and food, and there were festivals to commemorate ancestors. Wax masks of the dead were used in processions to remind people of a family’s history. In this way, there was constant interaction between the living and the deceased, through which the Roman dead would achieve a form of immortality.