Finding the cause of Tom’s rare syndrome

MDP syndrome (Mandibular hypoplasia, Deafness and Progeroid features) is an extremely rare metabolic disorder that prevents fatty tissue from being stored underneath the skin. These are the characteristic features:

MDP syndrome was first described in 2010 when 7 cases were reported by a group from Texas, USA. None of the patients described had an affected parent, nor were they known to be from consanguineous families where recessive inheritance is most likely.

We suspected that as neither of Tom’s parents have an MDP syndrome, it was likely to be caused by a de novo mutation. A de novo mutation is an alteration in a gene that arises as a result of a mutation in a germ cell (egg or sperm) of one of the parents. We sequenced the protein-coding regions of around 20,000 genes in Tom and both his parents and then looked for a genetic variant present in Tom but neither of his parents.

In the POLD1 gene on chromosome 19, we found 3 bases missing from Tom’s sequence: 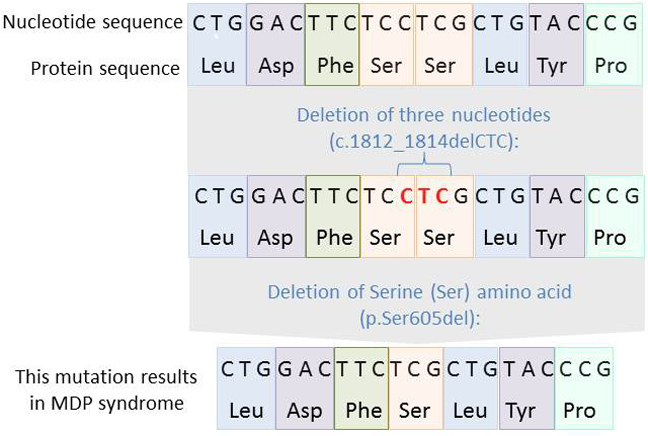 The POLD1 gene is expressed in all cells in the body and encodes the catalytic subunit of the DNA polymerase delta, an enzyme crucial for DNA replication. The 3 base pair deletion, described as c.1812-1814delCTC, results in the deletion of a serine residue at position 605 (p.Ser605del) within the active site of the DNA polymerase. Functional studies by our collaborators from the University of Washington, Seattle, USA, showed that this single amino acid deletion abolishes DNA polymerase activity.

The same mutation has subsequently been found in other patients with MDP syndrome. A second missense mutation, p.Arg507Cys, has been found in a few other cases. Many of these people had also waited many years for a diagnosis. This long period between presentation of symptoms and obtaining a genetic diagnosis is often described as a “Diagnostic Odyssey”. Genetic testing for MDP syndrome is now available for patients throughout the world. Our Diabetes Genes website also includes recommendations for clinical management.

If you would like to know more about the discovery of the POLD1 mutation causing MDP syndrome, we suggest you read An in-frame deletion at the polymerase active site of POLD1 causes a multisystem disorder with lipodystrophy, Weedon MN et al 2013, Nature Genetics.