Find out more
Home / History / British History / Discover the Hidden History of York / What was the Corpus Christi Play?

What was the Corpus Christi Play?

In this article, Dr Tim Wingard discusses the York Corpus Christi Play and how it was originally performed. 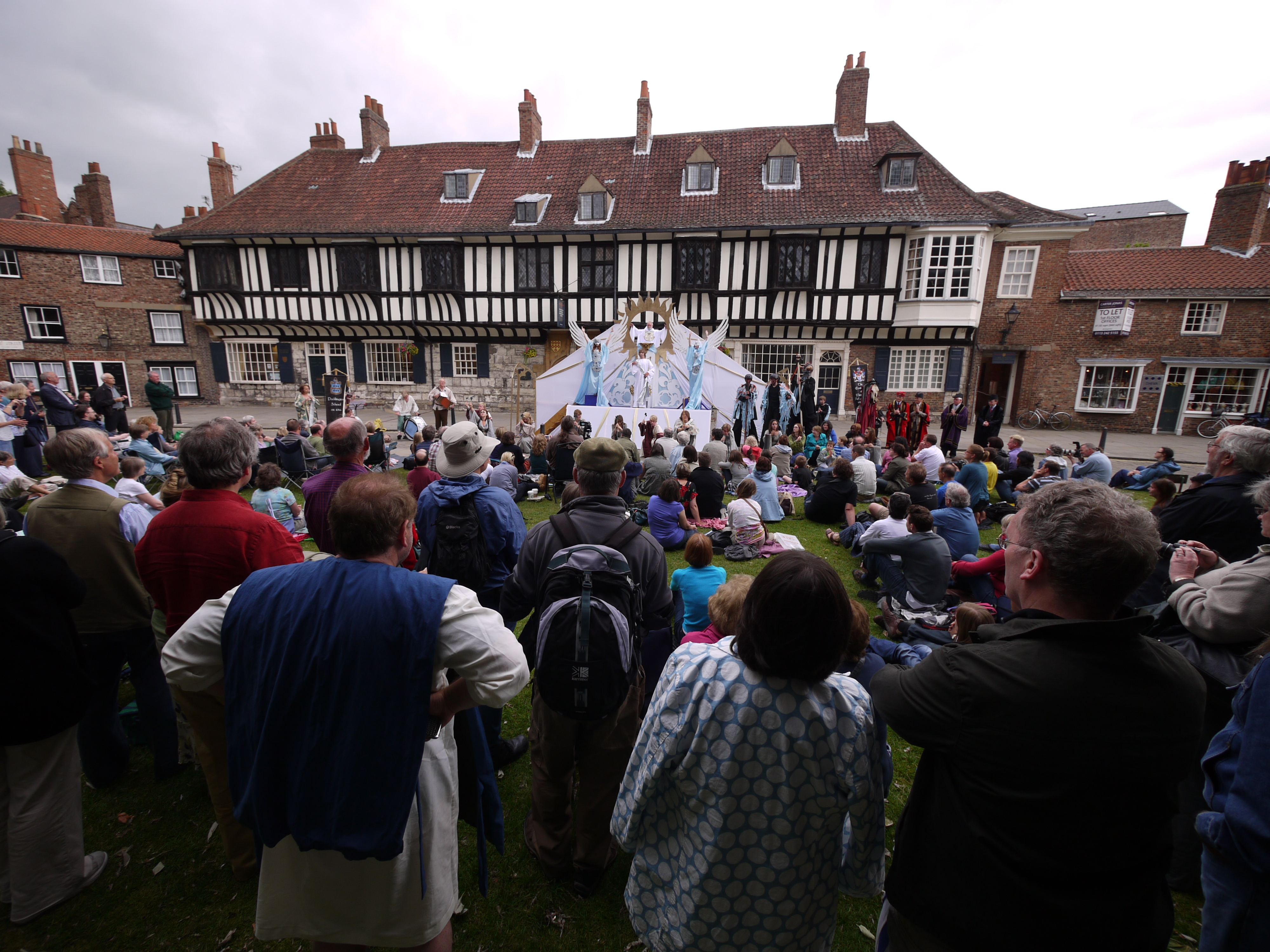 From around the second half of the fourteenth century to the middle of the sixteenth century, York regularly hosted the Corpus Christi Play.

More commonly known today as the ‘Mystery Plays’, this lavish event was one of the highlights of the annual calendar for the city’s inhabitants. The ‘play’ comprised up to fifty ‘pageants’ (i.e. individual self-contained performances), drawing on episodes from the Bible – from the creation of world to Judgement Day – which were performed outdoors on wagons that were moved around the city. The full cycle of pageants was a tremendous feat of organisation, with around 300 speaking parts and a substantial supporting stage crew.

To make the running of the Play more manageable, each pageant was assigned to one of the city’s craft guilds. These were organisations whose members shared a common occupation, such as the barbers, the goldsmiths or the drapers. The members of these guilds pooled resources for collective benefit, being something like a cross between a modern professional association and a trade union. Guilds were responsible for funding their pageants through the collection of a tax known as ‘pageant silver’ levied on each guild member. They were also required to look after the wagons on which the pageants were performed, as well as all necessary props and costumes, and store these securely when not in use.

Guilds would appoint a ‘pageant master’, who held a similar role to that of a modern theatrical producer: the pageant master oversaw the fundraising and logistics for the performance and engaged the services of a director who would lead the actual staging of the pageant. Everyone involved in the production, from the producers to the actors, were amateurs drawn from the members of the craft guilds; during this period, there were no professional actors in the sense that we would recognise today. The financial cost of putting on the pageants, as well as the manpower required, could at times make these performances more of a burden than a pleasure for those involved. Consequently, the city government compelled the craft guilds to participate in the play, threatening them with fines if they failed to put on their pageants – as happened to the linenweavers’ guild in 1486 for failing to perform the ‘Funeral of the Virgin’.

The performance itself was an all-day affair. The play took place on the Feast of Corpus Christi. This was a movable celebration: it was held on the Thursday after Trinity Sunday, which means it fell sometime between 21 May and 24 June depending on the date of Easter that year. On the morning of the feast, all the craft guilds gathered their wagons at Toft Green to the south-west of the city at 4:30AM. Then, the wagons would be led through the walls at Micklegate Bar and begin a loop around the city centre, stopping in turn at around a dozen ‘stations’.

At each of the stations, the actors would perform the pageants on their wagons, which had been positioned in the middle of the street, with the audience crowded around them on all sides. The wagons, around 4-5ft high, raised the actors above the heads of their spectators. Although these pageants were performed outdoors, the crowded urban architecture of York, with overhanging upper floors sometimes cutting off the sky, and with audiences of maybe up 100 people packed together in the narrow streets, would have given the pageants a much more intimate atmosphere than we might today expect from outdoor theatre usually held in more open spaces. Although the actors were physically separated from the audience, they interacted with the spectators much more than is usually standard for modern drama: actors directly addressed the audience, involving them in the narratives they were performing. With this intimate atmosphere and the heavy religious symbolism of the pageants, particularly those concerned with the lives of Christ and the Virgin Mary, it is likely that spectators experienced a highly emotional response to the drama.

The religious content of the Play would ultimately be its undoing. The York Corpus Christi Play continued to be performed until 1569, when it was finally suppressed due to certain elements of the pageants (particularly the portrayal of the Virgin Mary) sitting uncomfortably with new religious doctrine during the English Reformation. They then largely faded out of the collective memory of the city, until the polymath historian and librarian Lucy Toulmin Smith published an edition of the Play scripts in 1885. This heralded a revival of interest that has lasted ever since, and today, pageants from the Corpus Christi Play are still regularly performed in York itself and across the world.

How might a modern spectator’s responses to a Corpus Christi pageant differ from that of a medieval spectator? Please share your comments with colleagues using the Comment function