Why do drug harms happen? Read this article to learn about the interaction between drugs and different types of risk. 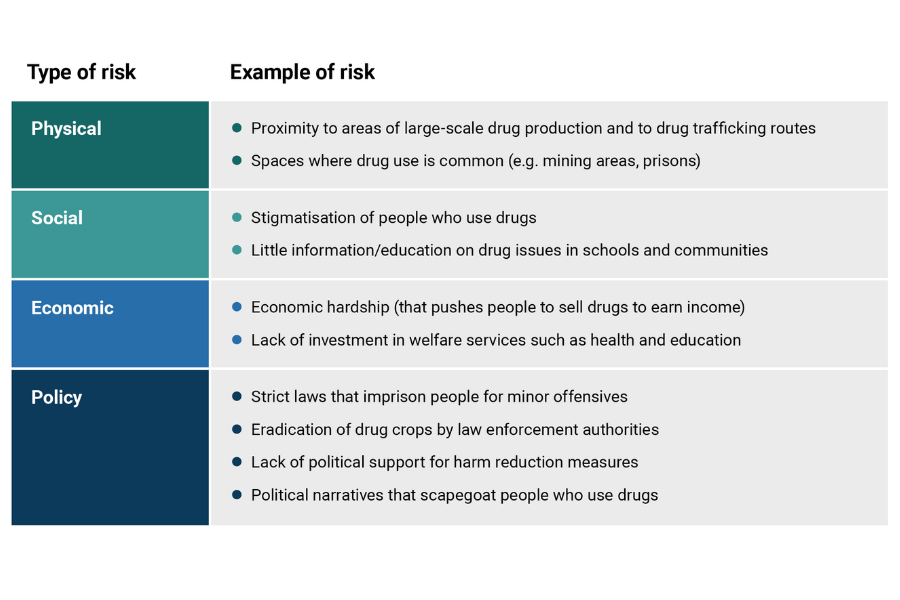 Much drug harm is caused not by any inherent properties of the drugs themselves, but by the contexts in which they are used, and responses to them.

Understandings of drug harm are too often restricted to the direct physical and psychological effects of drug use. For example, some drugs can cause insomnia, hallucinations and paranoia and chronic use of certain drugs can cause significant harms to certain parts of the body.

However, many of the harms that drugs cause are not the result of inherent properties of the drugs themselves, but are shaped by the contexts in which they are used.

The concept of a ‘risk environment’ is useful for understanding how drug harms are created by the interactions between drugs and their wider context.

A risk environment is the space – whether social or physical – in which a variety of factors interact to increase the chances of harm occurring (Rhodes, 2009).

The table above gives examples of how the physical, social, economic and policy context in which people live can increase the risk they will experience drug harms.

For example, in contexts where drug use is criminalised, people who use drugs tend to suffer from a wide range of additional health impacts, as they become marginalised and unable or unwilling to access support. Needle sharing becomes more common, making people who use drugs particularly vulnerable to diseases like hepatitis and HIV. Punishing minor drug offences with harsh prison sentences can destroy lives and deny people the support they need. And prisons often become sites of drug use. Lack of investment in appropriate, accessible and gender-sensitive drug treatment services can also increase risk of harm.

Focusing on the risk environment shifts responsibility (and blame) for the harms caused by drugs away from individual behaviour alone. Attention is drawn to the ways in which the social and political contexts in which people live also shapes their risk of drug-related harms.

This approach has important policy implications. Addressing drug harms requires changing the social situation and structures in which people live, in order to create enabling environments for harm reduction.