Looking at the process of beer becoming lightstruck and other organic compounds that can influence the flavour of the packaged product. 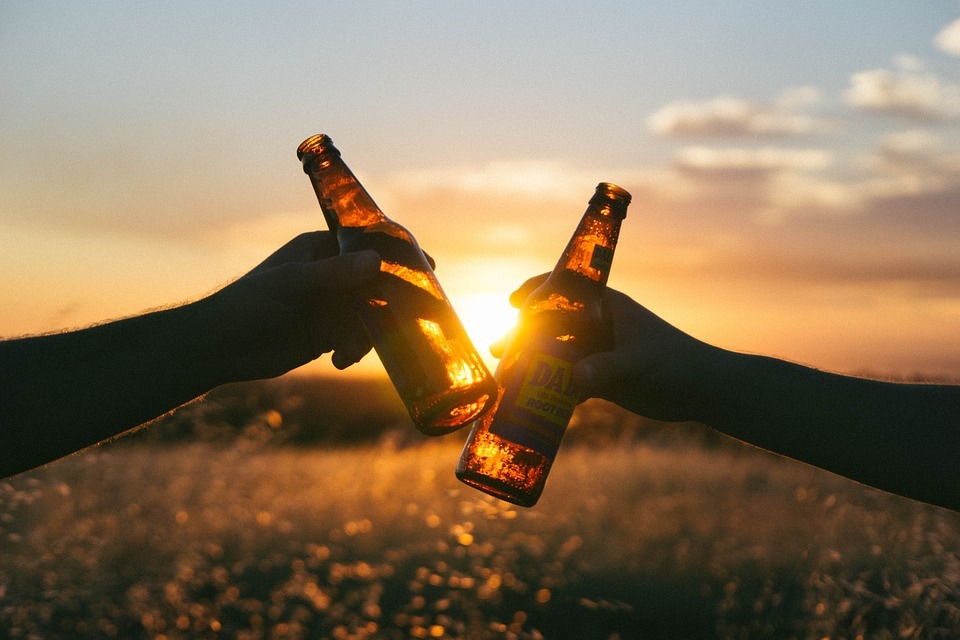 Trying to maintain the flavour stability of beer begins before the bottles even leave the brewery. Due to the presence of hop-bitter compounds, ethanol and acidic compounds (such as propanoic and ethanoic acids), the finished beer has a high level of resistance to being spoiled by microbes; in fact, all cask beers and some keg and bottle beers, are untreated (the resistance relying on the stability of the beer). Leaving a beer untreated can have an impact on its shelf life, but the attraction of drinking fresh beer outweighs the shortened lifetime.

The presence of microbes can result in an off-flavour in a beer however, so mainstream commercial breweries treat their beers in one of two different ways in order to try and extend their shelf life. This involves using very fine filters or pasteurizing the beer by heating it to 60 °C, which eliminates any microbes before packaging in a sterile environment.

After packaging, as time passes, the taste of beer diminishes and it can develop a stale quality – its bitterness is replaced with sweet, toffee-like flavours. Eventually, as these sweet flavours continue to rise, the beer can take on a ‘catty or cat-pee like’ taste, officially called ribes. When the ‘catty’ taste reaches its maximum, a cardboard or ‘straw-like’ taste dominates, which indicates staleness. Unfortunately, little is known about how the ‘catty’ taste develops in beer, but it has been linked to the presence of a smelly thiol called 3-mercapto-3-methylbutyl formate, Me2C(SH)–CH2–CH2–O–CHO, amongst other compounds. What is known is that if there is no oxygen in the packaged beer, then no catty taste develops.

(E)-2-Nonenal (or trans-2-nonenal) is the main contributor to the stale flavour in beer. It is often cited as the most important stale compound of lager beer, because its concentration is seen repeatedly to increase during ageing to levels above the flavour threshold. However, other compounds with similar structures (containing both a carbonyl (C=O) group and a carbon-carbon double bond (C=C)) will also contribute to the cardboard or straw-like flavour.

If oxygen is present in the packaged beer it does not contribute to the production of the staling compound (E)-2-nonenal. Instead, it is suggested that this compound is made earlier during the brewing process, perhaps from the oxidation of fatty acids in hop, such as linoleic acid. In the fermentation process, (E)-2-nonenal may bind to amino acids, which can function like a protecting group, and stop the reduction of the C=O bond in (E)-2-nonenal (by the yeast) to a tasteless alcohol. Then, during storage, (E)-2-nonenal can be released, resulting in the beer gaining a stale taste. However, controversy still exists about the relative importance of the different mechanisms in brewing practice and to what extent staling aldehydes are formed at the various stages during beer storage.

You might have noticed that beer bottles are normally made of glass that is brown in colour. This is important as it reduces the beer’s exposure to sunlight, which can result in ‘lightstruck’ beer; when a beer becomes light-struck, it takes on a skunky flavour. This process can only occur in beers made from hops as the mechanism takes place on hop-derived iso-alpha acids.

The process of a beer becoming lightstruck occurs through a mechanism involving free radicals – species containing an unpaired valence electron. Energy from the sunlight is transferred to the hop-derived iso-alpha acids, giving the compound enough energy to break the (HO)C–C(=O) bond leading to the six-carbon side chain (in pink). This occurs through homolysis, where the bond cleaves symmetrically.

The smaller side-chain radical can then ‘kick out’ carbon monoxide in a propagation reaction, commonly called a decarbonylation reaction.

The resultant free radical, with a five-carbon chain, can then react with sulfur-containing proteins (abbreviated below as HS-R), to make 3-methylbut-2-ene-1-thiol (or MBT), which has an odour similar to that of skunk spray. The precise mechanism of this step is still unclear.

Using brown glass bottles helps to ensure that very little light, with the correct wavelength, can reach the hop-compounds to produce lightstruck beer. Beer is also frequently sold in cans or kegs, which eliminate the possibility of lightstruck beer altogether, as no light can penetrate the container. If clear or green glass bottles are required for marketing reasons, then hydrogenated hop extract replaces the natural version, which effectively ‘skunk-proofs’ the beer.

The use of hydrogenated hop extract results in the removal of one or more of the side chain carbon-carbon double bonds, which can result in two different scenarios: either the light is hindered from being able to interact with the molecule, or the breaking of the bond to the side chain can still occur, but the radical that is formed lacks a C=C bond. The absence of a C=C bond means the radical is unstable, so only very small amounts are formed. (A C=C bond can stabilise an unpaired electron on an adjacent carbon, by resonance, i.e. the ‘dot’ can be spread over the C=C bond and this ‘spreading’ or delocalisation helps to stabilise the radical. For example, the allyl radical, H2C=CH–CH2•, is more stable, and more easily formed, than the propyl radical, H3C–CH2–CH2•.)

After the lengthy process of brewing beer, it is important to take measures to increase shelf life and the stability of the final brew… because no one wants to drink stale or skunky beer (even if it is safe to drink)! On saying that, if you want to try a taste test then buy two beers in clear bottles. Leave one in the light for a week or two and the other in a dark cupboard and then try them side-by-side (for more extreme results leave one in direct sunlight).

Does beer really taste better out of a bottle?

Research, both controlled and anecdotal, suggests that most people would say that the same beer tastes better when it’s in a bottle versus when it’s in a can. However, when you take away any knowledge of the beer and what the original packaging format was, the preference for bottled over canned beer disappears. So, in essence, people’s preference for bottled over canned beer is likely to be a psychological phenomenon. It appears to be due to preconceived preferences for certain packaging types that influence consumer preference for beer, which is a concept well known to beer marketers.

The same consumer preference for bottles over cans has been seen in other drinks like Coca-Cola – some think the subtle variations in taste are due to polymers that line aluminium cans absorbing small amounts of soluble flavour components from the drink. Also, a preference for glass over plastic bottles has been linked to plastic being more permeable to carbon dioxide – so the fizz will leak out of a plastic bottle of Coke quicker than it would from a can or glass bottle. But do you agree? Why not try this experiment at home, by taste-testing a fizzy drink from a can versus a plastic and/or a glass bottle – is there any difference?