An Experiment on Antioxidants and Apples

Testing the antioxidant properties of vitamin C using apples and denture tablets.
View transcript
6.8
Antioxidants protect cells against the damaging effects of free radicals, which are suspected culprits in heart disease, cancer and even the ageing process. Free radicals are so reactive because they possess one or more unpaired electrons, such as the hydroxyl radical (HO). Within the body, the hydroxyl radical can oxidise and damage lipids, proteins and nucleic acids, including DNA. To protect itself from the radical attack, and oxidation, our body has two basic forms of protection. One method uses enzymes, while the other uses organic compounds, such as vitamins, including vitamins C and E. Antioxidants are essential in the diet and are found in a range of foods and drinks, including tea.
50
It has been suggested that the health benefits are due to the antioxidants they contain, which counteract the damaging effects of oxidation caused by free radicals. This activity compares the antioxidant activities of various multivitamins on the browning of apples. Leaving slices of apples exposed to the air leads to the apple turning a familiar brown colour. This process, called enzymatic browning, is due to the reaction of certain enzymes with phenolic compounds, both present within the apple, that occurs when they are exposed to oxygen in the air. These oxidation reactions produce a number of compounds including a brown pigment called melanin. The longer the apple is exposed to the air, the more brown pigments are formed, and the darker the apple becomes.
97.1
So, we will use the rate of browning of apple to compare the relative effectiveness of antioxidants - we are looking to see which antioxidants best protect the apple from browning. First, place freshly sliced apple pieces into different glasses of water together with an antioxidant tablet ??? then monitor the rate of browning over time, by inspecting the slices. Make sure you do a control reaction, as simply soaking an apple in water alone will temporarily reduce the level of browning by restricting the amount of oxygen in contact with the slices. Tabulate your results, noting the relative levels of browning against time, with the multivitamins you have chosen. Take photos and don’t forget to post your ‘radical’ results.
139.2
Finally, although enzymatic browning impairs the quality and stability of freshly cut vegetables and fruit, it is beneficial to the colour and flavour of tea and coffee - so the appearance of browning is not always bad news.

The following ingredients will be required: 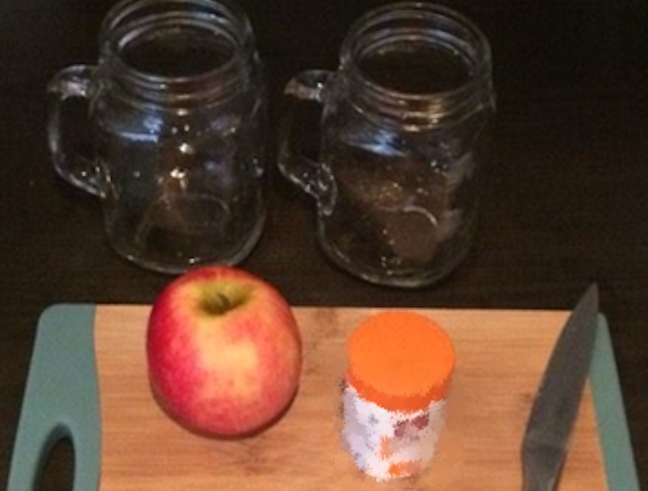 Ensure that you read through all of the instructions before beginning the experiment to ensure that you understand exactly what will happen at each step.

Fill each cup three-quarters full with cold water. Then cut the apple into three equally sized segments and drop one into each cup. 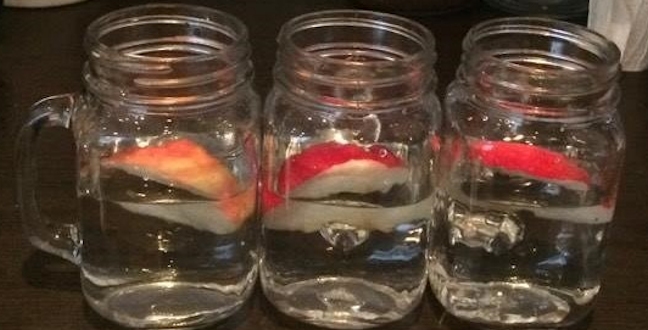 Carefully crush up each of the tablets that you have chosen, and place one into each glass, ensuring that you leave one glass with just water, as a control.

Make sure to stir each glass so that the tablet powder has dissolved in the water.

Once a day, monitor the apples to see how the oxidation process is progressing. Our results, on a pink lady apple, are shown below.

When the apple is cut and exposed to oxygen, free radicals are released and the apple undergoes the oxidation process and turns brown (i.e. oxygen is introduced into the injured plant tissue causing enzymes in the apple to rapidly oxidise phenolic compounds that are naturally present in the apple tissues to form the brown-coloured products called melanin). This is seen in the first apple, the one in water. Because the apples are in the water, the rate of oxidation is reduced slightly. This is why the control glass (the apple in plain water) is necessary, otherwise, it would not be a fair comparison.

The apple in water containing the vitamin C tablet (which contains antioxidants) has a very reduced rate of oxidation. This is because vitamin C is an antioxidant that reacts with the very reactive oxygen-centered radicals, turning them into less reactive species. Hence, this reduces the amount of oxidative damage to the apple flesh. This is why the apple in the vitamin C solution does not turn brown and remains fresh-looking.

Overall, we have determined that vitamin C tablets are the most effective at reducing oxidative damage and producing the healthiest looking apple, but, we would like to see the results that you have found. Upload pictures of your apple experiment onto our open Padlet (we have included some examples from a previous course to help inspire you) and/or on Twitter or Instagram hashtag #FLchemistry.

Another biologically important antioxidant is vitamin E, so you could compare the effects of vitamin C and vitamin E and see which apple browns first! Also, consider trying other commonly available vitamins and/or different types of apples. There are around 7,000 varieties of apples, but around 20 common ones, to pick from.

By the way, another way to stop the browning is to add lemon juice. The citric acid in the lemon increases the acidity and when the pH drops to around 4, the enzymes involved in the browning process stop working.

In the headlines – The Genetically Modified Arctic Apple

One of the most famous GM foods, which hit supermarket shelves in the US in 2017, is Arctic Apples. This is a group of trademarked apples that don’t go brown. The apples have been engineered, using a technique called ‘gene silencing’, to stop the production (by around 90%) of the browning enzymes (called PPO). They decay naturally, just like any other apple, but will not turn brown from bruising, cutting, or biting – not in minutes, hours, or days. Unlike the first genetically engineered crops (such as the Flavr Savr tomato) the apples are not transgenic, that is, they do not contain a gene from another species. So, despite protests from environmental groups, perhaps this crop may be more popular with consumers.

Extension Activity – Get Your Teeth into it

For those of you keen to do some further practical work – we have added an extension activity in the downloads section below. This uses denture tablets, with a dye in them, to test for the antioxidant activity of vitamin C tablets.