Vectran is a polyester characterised by aromatic rings on both monomer constituents. It has a relatively high melting point of 276-330 °C, depending on the thickness of the strand, and resists creep, a property where ropes and cables deform over time due to the tensile pressure placed on them. In sporting equipment Vectran was first introduced as synthetic stringing for badminton racquets. The notable impact resistance and high tensile strength result in a strong yet lightweight racquet head which allows for more powerful shots by the player. A 67 centimeter racquet can weigh as little as 87 grams (that is, much less than an average bar of soap)!

In both high-performance and non-competitive canoeing, carbon-fibre-reinforced polymer (CFRP) is the optimal construction material for canoe paddles and oars. Poly(acrylonitrile) or PAN is the main polymeric component of carbon fibre. The poly(acrylonitrile) fibres are spun before being heated in air, fusing the polymer into a series of pyridine rings (fully unsaturated 6-membered rings with a nitrogen atom) at approximately 700 °C.

Slowly heating the polymer to 600 °C expels hydrogen gas and fuses adjacent polymer chains together. At conditions up to 1300 °C multiple chains can fuse together, eliminating more hydrogen, and also nitrogen, leaving a pure sheet of interlinked carbon atoms. The high temperatures and pressures involved in this process align the microscopic crystals which the carbon sheets form all along the same axis as the fibre. Carbon fibre has a thickness of 5-10 micrometres in a fibre (a micrometre is one millionth of a metre). As such, the overall structure is very resistant to bending or stretching pressures.

The high cost of production has proven a key limitation in the widespread adoption of carbon fibre, but recent work has shown that adding a small amount of graphene to the production mixture could not only make carbon fibre more affordable, but possibly stronger and stiffer at the same time. Graphene consists of a single atomic layer of carbon, arranged in a honeycomb lattice. The individual sheets in graphite (which is used in pencils) are graphene. Interestingly, graphene has been shown to be the strongest material ever studied, being over 200 times stronger than steel. It is estimated that it would take an elephant standing on a pencil to break through a single sheet of graphene with the thickness of plastic wrap!

Mixing carbon fibre with an epoxy resin will add further strength to its structure and allow for it to be coated in abrasion- or further chemically-resistant layers. Epoxy resins are very strong polymers that can withstand high temperatures. They are formed by the nucleophilic attack of phenols (or deprotonated phenols) on epoxides, leading to opening of the strained three-membered ring. This forms a prepolymer that can be reacted with nucleophiles, such as triamines (e.g. H2NCH2CH2NHCH2CH2NH2) – each of the three amine groups can react with an epoxide on a prepolymer. As the three amine groups can each react with different molecules of the pre-polymer, this forms a densely cross-linked structure that is very strong. 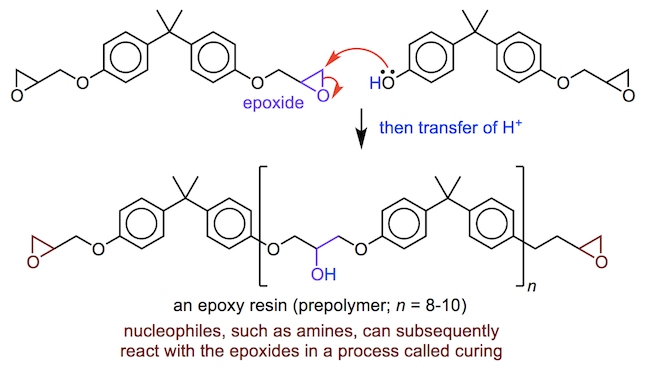 Alternatively, polycarbonates contain the carbonate functional group (O-(C=O)-O) and are commonly formed from acid chloride (RCOCl) precursors and bisphenol A. The monomers are linked together by multiple nucleophilic acyl substitutions where HCl is lost as a by-product. The resultant polymer layers are flexible and non-brittle. These are properties that allow them to be moulded into shape as a solid sheet without cracking or breaking, for example, for use in canoe and kayak hulls.

On the subject of bisphenol A (C15H16O2), or BPA, you may be aware of the health concerns over the use of this chemical. It mimics the estrogen hormone, estradiol, and some animal studies have shown that BPA affects fetuses and newborns. Even human studies have linked BPA to a range of health issues.

In 2017 the European Chemicals Agency concluded that BPA should be listed as a substance of very high concern due to its properties as an endocrine disruptor (i.e., a chemical that interferes with our hormones). BPA is present in many household products, from food packaging to toilet paper and linings of beverage cans. Although our bodies quickly remove BPA, its ubiquitous use in so many consumer goods means that the substance persists.

A 2003-2004 National Health and Nutrition Examination Survey found detectable levels of BPA in 93% of 2517 urine samples from people aged six years and older. Concerns about the health effects of BPA have led many manufacturers to replace it with substitutes, such as bisphenol S (BPS, C12H10O4S), although there are safety concerns over these too. So, the search and research continues.

Further research into polymers continues to inspire cutting-edge breakthroughs in both pure chemistry and applications in medical and industrial settings. For example, research has suggested that nanotubes, involving compact tubes of bonded carbon atoms, have a variety of potential applications such as: a super-strong industrial fibre, an alternative to copper conduction wire, and a novel delivery method for targeted chemotherapy.

Take a look at this super video by Oli, one of our former students, on badminton, made as part of our first year undergraduate macromolecules course.