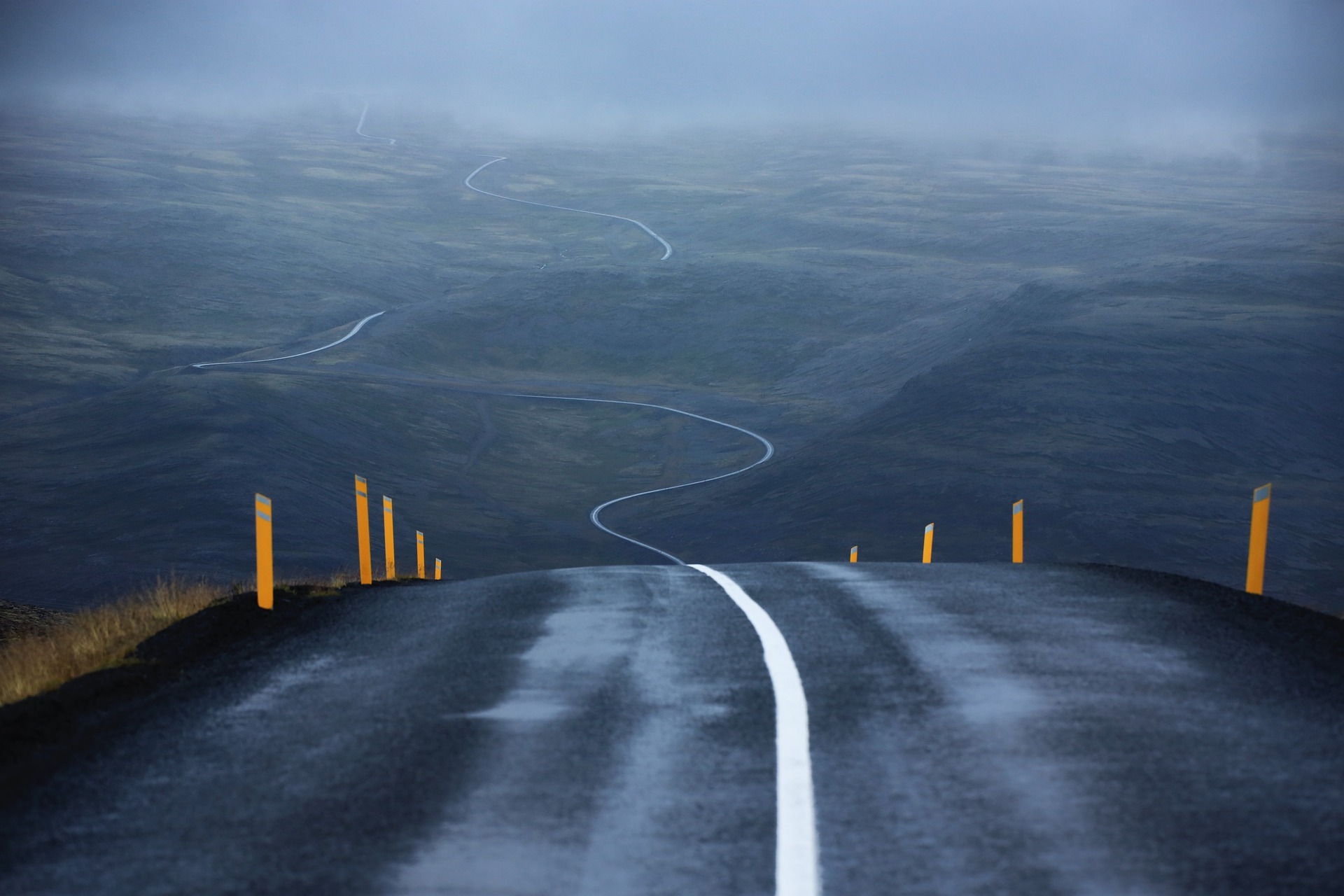 Last week we discussed some of the factors which drove the initial development of V2G. A significant amount of research is still taking place in order to transition the technology from proof-of-concept to commercialisation. As V2G develops, it has become clear that there are global trends which will make V2G an important technology in the future – in particular the impact of EV uptake.

In 2010 when the first Nissan LEAF launched, the EV industry was in its infancy and most vehicle manufacturers were focused on low-volume production. Jump forwards a little over a decade to the present and the EV industry can finally be said to be reaching maturity due to a mix of: 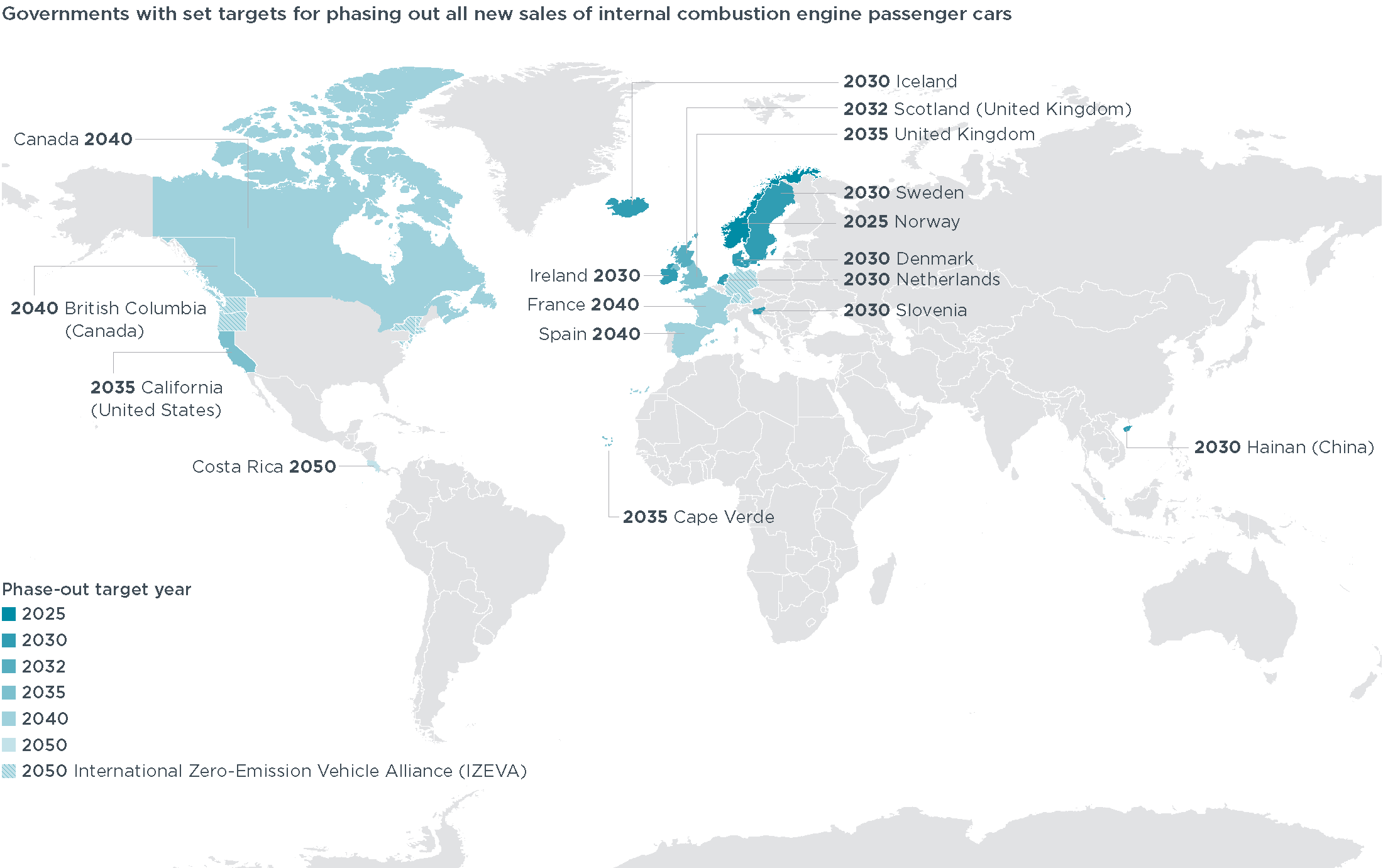 International ICE Phase Out Plans, as of Nov 2020

With phase-out targets for ICE cars ranging from 2025 to 2050 internationally, the switch to EVs now seems inevitable – at least for cars, vans and 2/3-wheel transport. Yet the impacts on the energy system of such a switch are significant. According to predictions by National Grid ESO, the UK’s Energy System Operator (ESO), the switch to EVs is predicted to create extra annual electricity demand in Great Britain of over 80 TWh per year by 2050. To put that in perspective, the annual energy demand for the UK is usually around 350 TWh – meaning that EV demand represents a more than 22% increase in electricity demand.

Historically, balancing of energy demand and generation has been managed largely by controlling the output of large power stations. As mentioned in the previous step, with the rise of intermittent renewable generation and the decline of fossil-fuelled power stations, the requirements for flexibility are now moving from generation assets to demand. To accommodate the growing demand for electricity and its increasingly intermittent production, EVs will need to be flexible in the way they consume energy when charging.

Smart charging (controlling when EVs charge and at what power), while a necessary source of flexibility, can only do so much. National Grid’s Future Energy Scenarios published in 2020 show the relative impact that both Smart and V2G charging may have on a future energy system. In their Consumer Transformation scenario, they simulated the effect of 73% of EV charging becoming Smart by 2050. The impact on the EV charging electricity demand at the Winter peak is shown in the chart by the dotted and dashed lines. If just 26% upgraded to V2G, then the net EV charging demand at the peak could become negative. 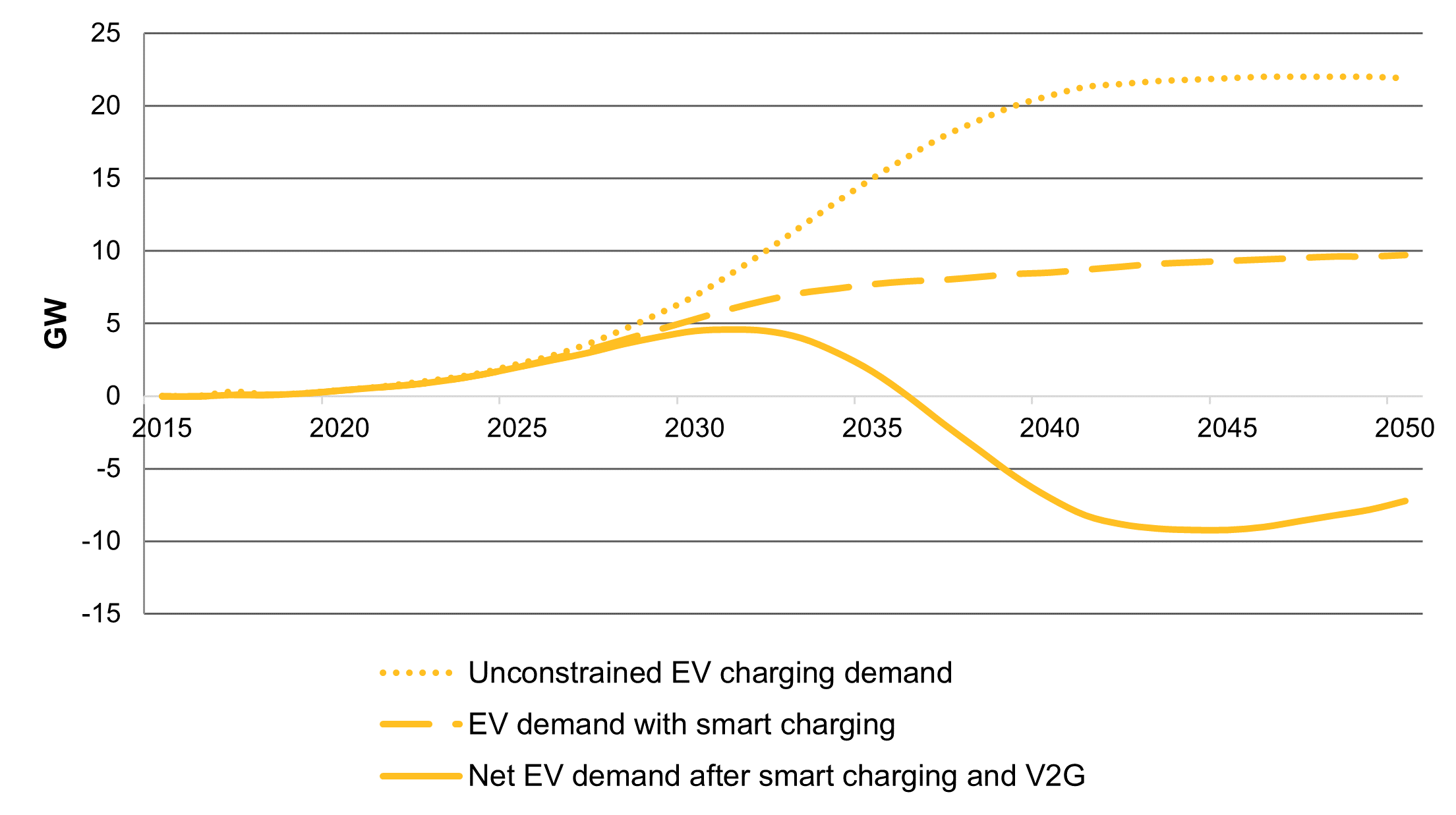 A further challenge is connecting chargepoints to the local electricity network. In the UK, the after diversity maximum demand (ADMD) for electricity from a 3-bed property with gas heating is about 2 kW. This will vary from country-to-country dependent on building types and ambient air temperature, but we will use this for illustrative purposes. By contrast, a standard EV charger is typically 7.4 kW – so that is like adding 3 new homes on the same plot. With this in mind, you can understand that this has the potential to put significant strain on existing electricity networks.

Network operators are tackling this issue through network reinforcement and the use of smart networks – and that is where V2G potentially comes in to play. As we discussed in the previous step, alongside electrification of transport we are experiencing a second major trend – the electrification of heating. Domestic air source heat pumps typically range from 6 – 16 kW depending on the size of the property. Now, if you add a heat pump and an EV charger to a home, you have effectively multiplied the potential peak demand of the property around 8 times! Without a smarter approach, this will result in a huge amount of costly network upgrades. While we are still in the early stages of seeing the impact of electric vehicles on the energy system, without the use of technologies such as V2G these two trends combined will result in countries around the world reaching a crunch point with their energy systems well before 2050. In fact, in countries with high penetrations of EV’s, the benefits which can be achieved by V2G will start to become evident as early as 2035.

So, to summarise, the switch to electric vehicles is impacting both the national and local electricity networks. Combined with other trends, such as electrification of heating, this is fast pushing the networks towards their limits. Without electrification of heating and transport, it is almost impossible to tackle important issues such as climate change and air pollution. Therefore, solutions such as V2G provide essential tools for managing these impacts and supporting the transition to a zero-emission future.

What other trends or changes are you aware of that mean that flexibility from technologies like V2G is becoming more important? Other than V2G, what other ways are there which could manage the impact of these trends? Share your thoughts with other learners below.