In this article, it explores the first proposition for V2G highlighting the prospect of using V2G for financial gain. 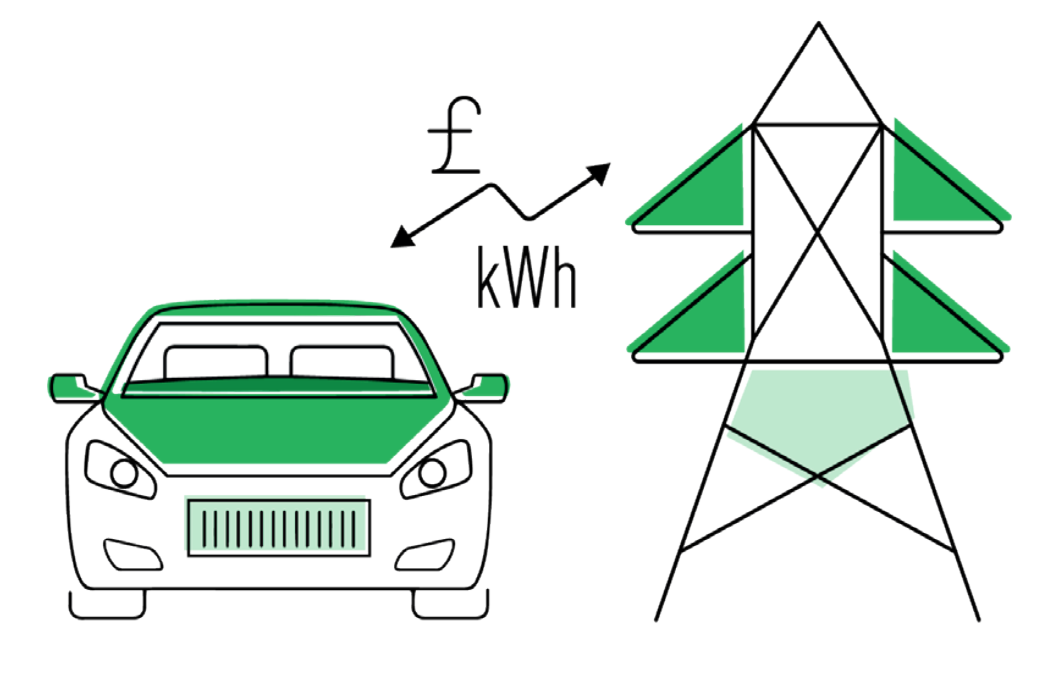 The first value proposition for V2G you’ll explore is the prospect of using V2G for financial gain. This may be achieved in various ways, which include offering flexibility services at a national or distribution grid level; trading on energy markets; or optimising the cost of site-level energy usage.

This value proposition has been the most widely explored in V2G trials and is of particular interest while the V2G charger retains a considerable cost premium above smart chargers. Element Energy, as can be seen in the table below, have predicted this premium to be around £4000 in 2022, reducing incrementally to around £1000 by 2030. 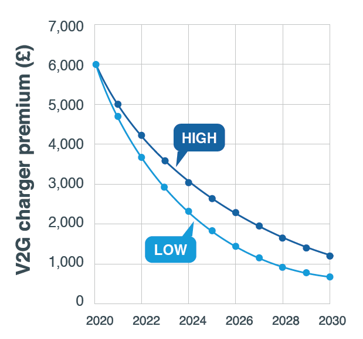 Given the high capital cost it is understandable that the purchaser would seek to predict what the payback period will be to break even on their investment.

This is a common consideration for energy-related investments, whether one is looking to install solar PV, heat pumps, energy efficiency measures such as loft insulation or even when choosing an EV over an ICE vehicle. The table below gives some typical payback periods for these purchases. It is acknowledged that these can vary considerably depending on various factors such as climate, system size, Government incentives offered, energy usage and energy price stability.

Although a 6.5-year payback period for an EV may be considered typical for the average UK driver buying a new medium-sized EV in 2021, in many cases it could be much shorter. For high mileage drivers who can access cheap overnight home charging tariffs, the payback period may be less than two years. This is before you consider that price parity between EVs and ICE vehicles is expected before 2025.

V2G offers an interesting means by which the overall business case for an EV can be further improved by using the battery to earn revenue whilst the vehicle is parked.

Sources of revenue that could tapped into include:

Please refer to further reading (under ‘See Also’ below) if you have interest in learning more about each of these.

What financial value can be obtained using V2G?

A parameter that is pivotal to most of these revenue streams is the Plugged-in-Not-Charging (PiNC) time, i.e., the percentage of time in a day that the EV is connected to the V2G charger and is not charging for driving purposes. This metric can be used to determine its availability to participate in these revenue streams.

As well as PiNC time, the value to be gained from each revenue stream may be driven by electricity price volatility and the volume of local demand to be offset.

However, there are additional complexities that make determination of the financial value from V2G a less than straightforward prospect, including:

Project Sciurus considered the business case for domestic V2G installations in the UK. Modelling (using real-world plug-in data and battery capacities of 40 kWh) suggested that using V2G for tariff optimisation could produce mean annual revenues of £340 per EV, £220 higher than modelling suggested for optimised Smart charging. Stacking this with different TSO flexibility services could make this even more lucrative: combining with Firm Frequency Response (FFR) brings this figure to £513, whereas stacking with Dynamic Containment (DC) could generate £725.

Ofgem’s targeted charging review (TCR) to remove time of use based Transmission Network Use of System (TNUoS) charges from April 2023 is expected to erode around 50% of the value captured by tariff optimisation. However, it is also possible that positive effects could arise which would improve the business case. Such effects include increasing instances of high price volatility in the energy wholesale market, and reforms to the balancing mechanism lowering barriers to entry for smaller assets.

Notwithstanding these potential positive aspects, the project predicted possible payback periods with the changes proposed in the TCR. At a current V2G charger premium of £3,700 (including hardware and installation), the project suggests a payback period of >30 years for optimised tariff V2G, 14 years for this plus FFR services and eight years with optimised V2G and DC services. However, following mass production, if the V2G charger premium were to drop to £1,000 these payback periods could reduce to just nine, four and two years respectively.

All in all, the financial case for V2G is very much still in the evolutionary phase with new markets opening to customers in some cases and obtainable value from existing available markets diminishing in others. Understanding the revenue sources available and rewards to be obtained is far from straightforward, even for investors and industry players, and this level of uncertainty makes this value proposition a difficult sell at present. To persuade customers to participate or invest in V2G for financial reward, ‘simple’ customer propositions are needed.

This proposition can be difficult for customers to fully understand due to the complexities and evolving nature of energy markets. How would you propose building a business case? Would the development of a tool to calculate an anticipated return on investment for a V2G charger based on your circumstances make you more likely to consider adopting V2G?