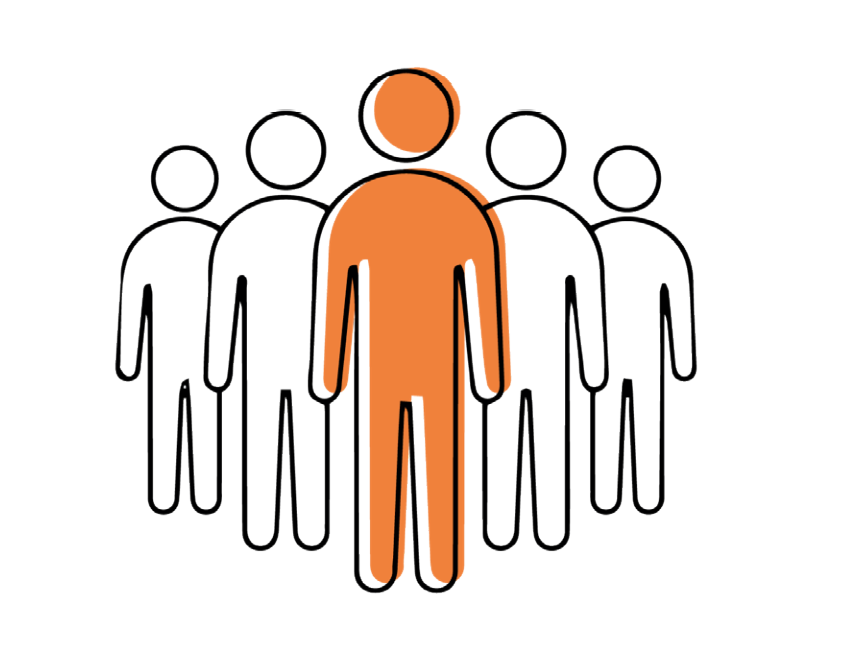 The fourth value proposition in this series, Benefit to Society, is essentially altruistic, or unselfish, in nature. It can be considered as investing in V2G to act as a small piece of the collective push to avert climate catastrophe. Social benefits are to be gained from helping to reduce the economic burden on fellow citizens in transitioning to a cleaner electricity network, with better health outcomes from the resulting cleaner air. As we touched on in the personal net zero value proposition, consumers may make lifestyle choices and purchasing decisions based upon a desire to reduce their carbon footprint. The more individuals who commit to such adaptations, the greater the combined impact.

EV drivers have already taken a step to reduce their environmental impact and their contribution to air pollution in their local communities just by driving an EV rather than an ICE vehicle. However, participating in V2G and offering flexibility to both the DSO and TSO, can assist with electricity network decarbonisation plans.

Adopted on a wide enough scale, V2G can play a role in transitioning the energy system from a traditional centralised fossil-fuel plant powered approach to a modern decentralised approach incorporating local renewable assets. As mentioned earlier in the course, the transition to renewable generation requires significant amounts of flexibility in the electricity system. The storage capacity offered by EV batteries could enabling more renewable power to be integrated into the electricity system by balancing its intermittency and reducing the need for curtailment.

Curtailment happens when wind turbines (or other renewable energy generation assets) have their output restricted after receiving signals indicating that there is congestion on the electricity transmission network. This congestion can often be caused when there is insufficient demand in the region of the generation. This loss of energy is not only wasteful (6% of the UK’s wind potential was curtailed in 2020) but also expensive as National Grid have to pay generators to not generate. 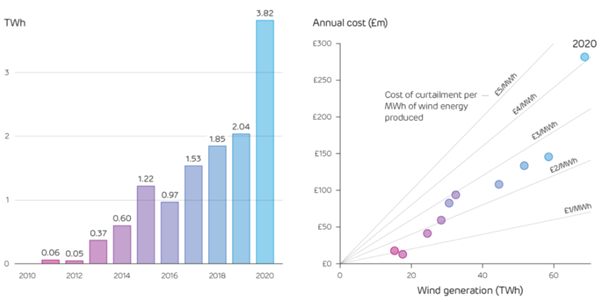 As Electric Insights analysis shows (Figure 1) curtailment is a growing issue for the UK. 2020 was the year with the most wind energy curtailment on record, almost doubling relative to 2019, with the cost of curtailment per MWh produced also rising significantly on previous years.

A piclo study into the value of flexibility suggested that if the UK is to achieve net zero by 2050, utilising flexibility from V2G on a national scale could reduce the curtailment of variable renewable generation by 30 TWh/year – giving a carbon saving of about 6 MtCO2e per year.

Alternatives to providing this level of storage could be pumped hydro, large scale stationary batteries and hydrogen fuel cells. Alternatively, significant upgrades to the transmission system could relieve the issue. Each of these approaches would be hugely expensive to implement, ultimately trickling down to customer energy bills. With a societal shift to EVs seemingly inevitable due to Government policies and being close to achieving price parity with ICE vehicles, it makes sense to tap into, what will be, existing assets.

As Figure 2 shows, in National Grid’s latest publication of Future Energy Scenarios, their Leading the Way scenario, considered as the fastest credible decarbonisation pathway for the UK to meet net zero by 2050, proposes that 45% of households will engage in V2G services. In both the Consumer Transformation and Leading the Way scenarios, National Grid assume there to be over 1 GW of V2G capacity by 2030. This is a positive indicator, showing the potential scale of V2G adoption.

With enough customers export their EV battery’s energy back to the grid at peak times (typically 5-7pm) and thereby shifting the demand for EV charging to off-peak times, a smoothing of the demand curve can be achieved. With a more stable demand curve throughout the day, supply-demand matching becomes a simpler process and reduces the need for energy generators to ramp up fossil-fuelled power plants to meet peaks in demand. Thus, more communities engaging in V2G can support the wider decarbonisation of the national grid, with the need for peaking power plants diminished.

Society then benefits from the resulting eliminated carbon dioxide emissions and air pollution. Carbon dioxide emissions have well documents consequences for climate change. But increased air quality brings significant short-term health and wellbeing benefits for the local population as well as a reduced long-term burden on health services and prevention of premature deaths.

The increasing trends towards electrifying heat and transport, if not carefully managed, could also create heightened peak demands which may require DSO network upgrades and new substations. However, an aggregation of V2G assets offering demand side response could defer or eliminate the need for such upgrades by supporting other energy sources in meeting the demand. Modelling from the aforementioned piclo study indicated that the resulting annual savings could be £180 per household. As a result, you can imagine a community group of engaged V2G enthusiasts supporting each other and their neighbours in keeping their energy bills down.

For a business, promoting their use of V2G as a means of supporting wider society to reach climate neutrality (and its associated economic and social benefits) may positively support their brand image alongside helping them to enact their internal sustainability policies.

Whilst not viable for all businesses, V2G may be beneficial when company vehicles remain parked at a depot overnight or where employees partake in shift work, such as the healthcare and manufacturing sectors. Other niche cases where sites have local electricity supply constraints may also occur.

With business decisions often being market-led and cost-sensitive, it would perhaps be considered unlikely that this value proposition alone would sway many companies towards V2G investment. As such it may be combined with other value propositions such as financial reward achieved by avoiding network upgrades via managing energy use within existing site constraints; or with personal net zero to optimise generation from on-site renewables.

Marketing for this value proposition is quite challenging as it provides no direct benefit to the user and instead relies on their good nature to support with tackling wider economic, social and environmental challenges. Although it would be a commendable stance, realistically without a sizeable reduction on the premium paid for V2G chargers relative to conventional ones, one would not expect many consumers to have the appetite and means to invest in V2G for this purpose alone. Governments should not rely on the strength of this proposition alone to drive V2G uptake. Enabling technologies such as V2G must be affordable and logical options to become widespread.

You can read more about renewable energy curtailment in this Physics World article, and about the growing curtailment challenges as experienced by the UK in Q4 of 2020 in Drax Electric Insights quarterly report.

Piclo’s report on The Value of Flexibility assesses the value and whole-system impact of demand-side flexibility in a net-zero carbon energy scenario for the UK. The modelling therein provides results that quantify the system-wide financial benefits that could come from widespread deployment of V2G technologies.

National Grid ESO publishes an annual Future Energy Scenarios report with detailed pathways that the UK could follow to reach their net zero ambition of 2050. The 2021 report considers V2G as a storage asset to varying degrees across its scenarios.

How do you feel about this value proposition? Is it realistic to expect use cases to develop around this idea?

If the cost premium on V2G chargers dropped to less than £1000, would this value proposition be enough to convince you to invest in V2G without any other direct financial incentives?

Why not add your thoughts to the discussion below?