In this step we will take a look at the communications standards and protocols, again at a high level, involved in this control. 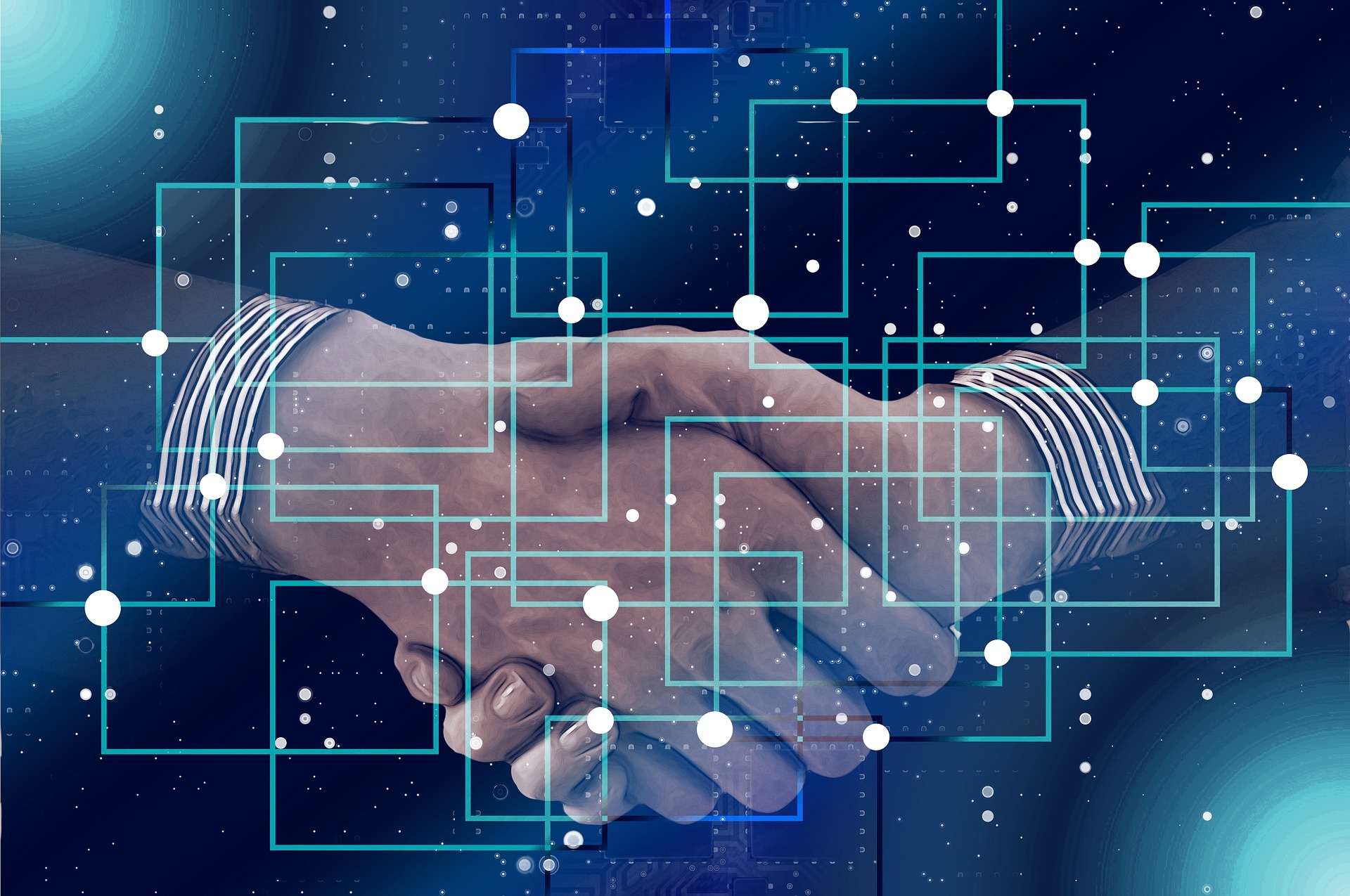 We have looked at the EV to EVSE interface and learnt a little about how bidirectional charging is controlled locally. However, for many of the use cases for V2G – which we will discuss later on in the course – the local part of the eco-system responds to remote instructions from the Chargepoint Operator (CPO) to charge or discharge. In this step we will take a look at the communications standards and protocols, again at a high level, involved in this control. 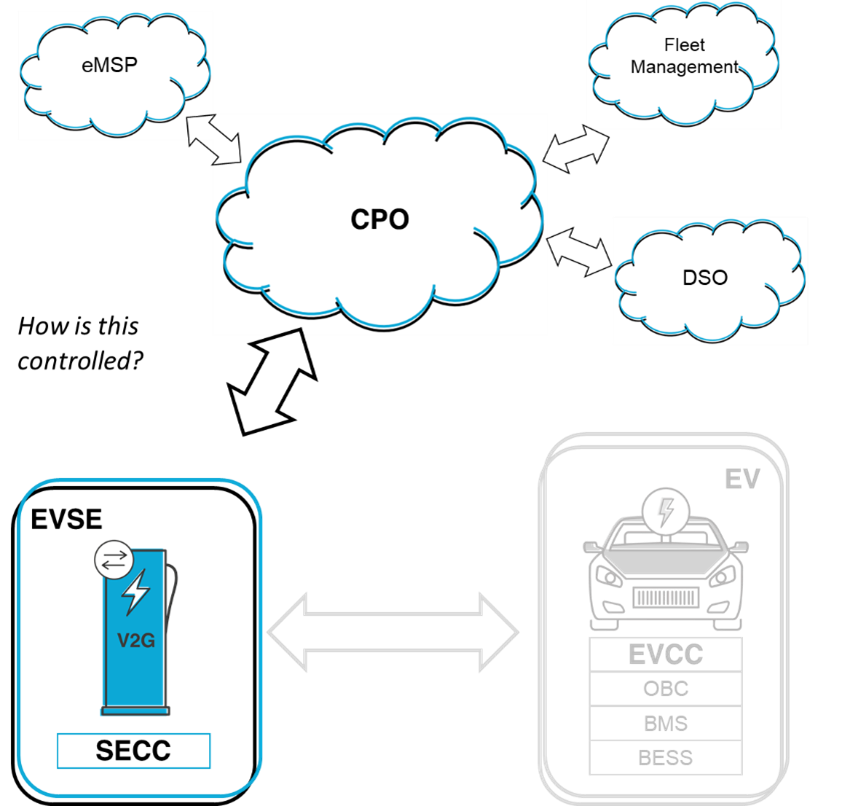 This architecture makes the EVSE the central point of the system, with the instructions from the CPO being sent to the EVSE to then be used locally in the EV to EVSE control system described in the previous step.

In its latest version, 2.0.1, OCPP is implemented in JavaScript Object Notation (JSON) which is an open standard, human-readable, file and data-interchange format. The information sent and received for control of charging transactions include messages for reservation, diagnostics, tariff and cost and authorization. The key set of messages that drives the charging and discharging in V2G is the charging profile which defines the time and power for the power transfer.

Responding to control signals from the CPO is actually only one of four ways in which the EVSE may respond to an external actor. The others are:

OCPP defines the rules that the chargepoint is to follow when it is asked to respond to signals from multiple actors. One of the key rules is that the charging power shall always be the lowest of any of the schedules for safety purposes.

Version 2.0.1 implemented a number of added and improved functionalities compared to the previous major version, OCCP 1.6. One of these, is support for the ISO 15118 standard. You may remember that this is the standard (ISO 15118-20) that will define how V2G control is done locally between the EVSE and the EV. As ISO 15118-20 is not yet released, OCPP 2.0.1 does not yet include standard functionality to communicate messages relating to bidirectional charging for V2G.

Therefore, for current manufacturers of V2G equipment and the CPO developers of the CPMS, whilst OCPP is often used as the framework for standard EV charging control, additional bespoke work is required to integrate control of a V2G chargepoint. OCPP does allow for custom fields which will often be used by CPOs and V2G EVSE manufacturers to implement this control. Other V2G EVSE manufacturers may choose to also act as the CPO and use their own proprietary CPMS that is not grounded in OCPP.

It is anticipated that when ISO 15118-20 is released and if and when the industry begins to adopt the standard into vehicles and the EVSE, OCPP will catch up to define the CPO to EVSE V2G control functionality.

Further up the chain of command

You may have spotted that there are other entities interfacing with the CPO in the image above. These are there to show that the communications and control does not necessarily stop with the CPO. Depending on the use case for V2G (again, more on these later in the course), there may be other stakeholders involved with the V2G control eco-system. These include: 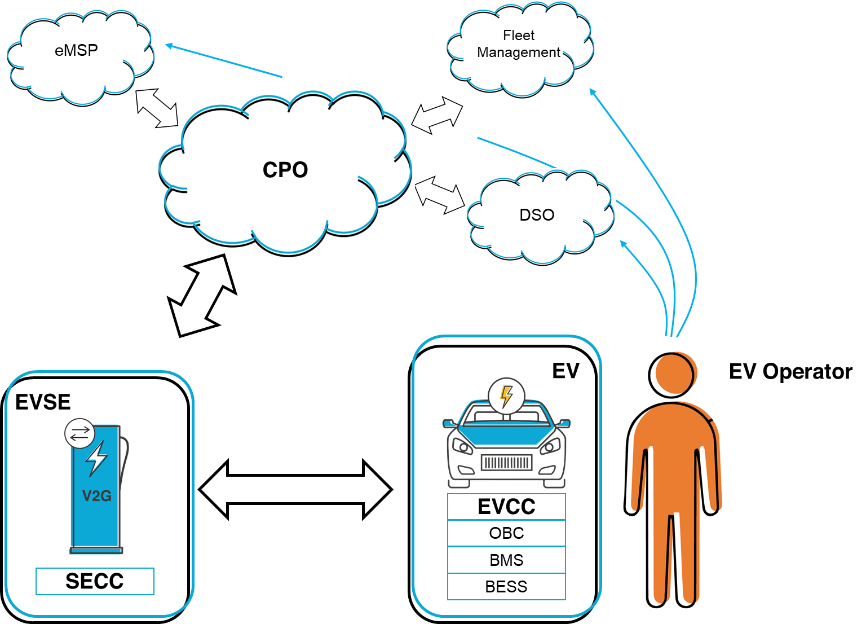 The V2G Control Eco-system Including the EV Operator

This is at least the case in current V2G demonstrators; in future V2G systems it could even be that the vehicle knows and communicates its own constraints, removing the need for human interaction with the V2G eco-system.

In summary, irrespective of its purpose, there is a lot happening behind the scenes to control a V2G system. If you are to remember four things about V2G control architecture then let it be these: