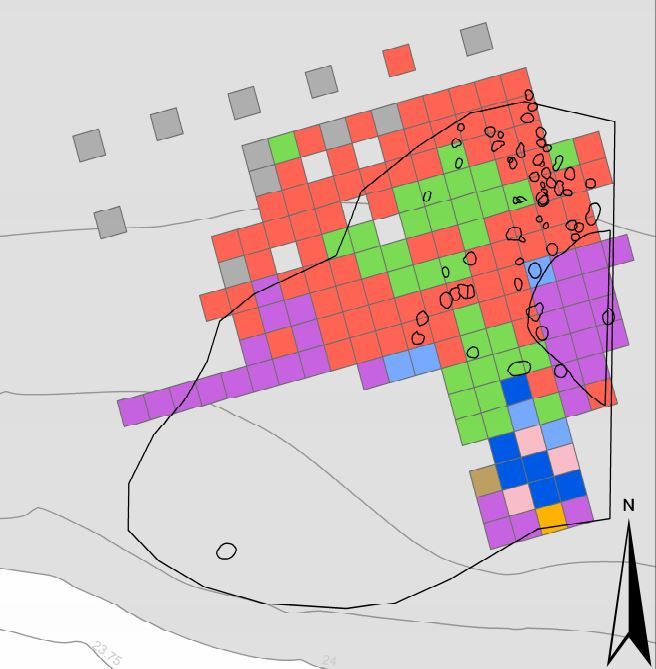 Firstly, samples from a freshly excavated surface are taken using a trowel across a gridded-out area. Charlie then applied multi-element analyses using ICP-AES. Six elements were selected for statistical study as they made up the highest contributions of the samples: aluminium, calcium, iron, potassium, magnesium and phosphorus. Manganese was also included because it showed a high degree of variability across the site. Charlie then conducted grouping analysis and plotted her results using GIS.

The map above shows the sites split into grid squares and colour coded to show which parts of the site are similar in terms of the elements analysed. The purple areas are depleted in most elements. The red and green areas tend to be low in all elements, except for magnesium which is elevated. There are some differences between the red and green areas, with the latter showing lower potassium and higher magnesium and phosphorus levels.

The area to the south of the map is complex and here there is a lot of variation between relatively proximate grid squares, but with some very localised patterning. Generally, the pink/orange/light blue/brown/dark blue areas show low manganese, low magnesium, low potassium and high phosphorus levels, but this can vary between each small cluster. The grey squares reflect sampled areas where the glacial till has been contacted, which gives a clear signature in the elemental analysis. This tends to be characterised by low-mid manganese, low phosphorus, high magnesium and high potassium levels.

The results showed that there was a consistent depletion in the values from the central house structure (showed in the picture above as the purple area to the right, bounded by a line and postholes). What is interesting about this is that we had expected the house structure to have higher readings. What this might be showing is that people kept this area cleaner than other parts of the site.

The other area of interest is to the southwest of the structure (where there are a range of different colours representing different groupings). In this area there was also an unusual pit or posthole which was filled with burnt flint and bone. This area appears to be more indicative of an occupied zone due to the higher phosphorus/phosphate levels – perhaps in this area people were discarding some of the waste which was cleaned out of the house.

Although this method does not tell us exactly what people were doing where, it does demonstrate the potential of using it on Mesolithic sites and may be of use in interpreting spatial patterns when features such as post-holes are not present.