Finally, it is time to be able to talk about humans entering the life of earth story! I asked Professor Becky Ackermann, a biological anthropologist to tell me about when and how humans became such a dominant species.

History of life on earth 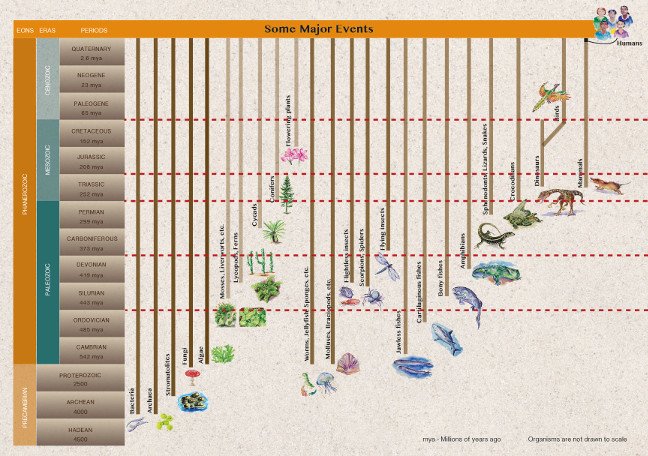 Looking again at the life on earth chart, you can see that human relatives have only been around for about the past 6 million years. Becky tells us that, only when humans spread across the world (1.8 million years ago), and then underwent the agricultural (10 000 years ago) and industrial (a few hundred years ago) revolutions did people start to become dominant.

Highly successful reproduction of our species (population growth) has led to increasing pressure on resources, and Becky leaves us with a challenge about stopping the destruction of habitats of other species.

Becky Ackermann talks about how humans are a ‘hybrid’ since they and their ancestors have, for a very long time, been migrating, meeting, interacting and exchanging genes and culture. She suggests that coming together and “exchanging” is a very human trait, which makes it very difficult to categorise people into discrete units.

The success of humans is threatening other species. How might we avoid impacting on other lifeforms and become more sustainable? What can we personally do so we reduce the over-exploitation of Earth’s resources?