Watch Dr Marc Alban-Millet introduce a range of primary and secondary volcanic hazards.
View transcript
6.8
Volcanoes are hazardous and present risks to human life and our infrastructure. But what do you think of when you hear the words volcanic hazards? Is in the news reports of volcanic eruptions? Or large clouds of ash? Or the aftermath of devastating damage to homes and roads? And what do you think is the greatest hazard presented by volcanoes? In this video, we’re going to take a look at the hazards volcanoes present, some of them being familiar to us, others may be new to us. The hazards that volcanoes present are varied and many. But helpfully, we can group volcanic hazards into two main categories, primary and secondary hazards. Primary volcanic hazards are those presented by specific activity, such as ongoing eruptions.
51.2
Whereas secondary hazards are those presented because of the unstable nature of the material that makes up a volcano. We need to understand the difference, as secondary hazards aren’t always triggered by a volcano erupting, and can occur during resting periods. Primary hazards are linked to the ejection of volcanic material. This includes lava, ash, and gases. Our first volcanic material is lava. Lava flows are generally considered to pose a small threat to humans because lava moves slowly enough for people to be able to outrun it. It does, however, present a big threat to buildings, roads, and crops, because it’s virtually impossible to stop the flow of lava. Lava flows also have the potential to create secondary hazards.
96
They can melt large amounts of snow, which was one of the causes of the Mount Etna event that we discussed earlier in the course. In this case, it was the rapid cooling of the lava in contact with the snow that created small steam explosions that launched pieces of magma into the air, putting the people nearby at risk. Our second volcanic material is ash, which presents two main kinds of hazards. During explosive eruptions, ash can be ejected up to tens of kilometres into the atmosphere. The ash will then start to spread sideways, forming an ash cloud. This ash then rains down from the clouds with the coarser ash particles being deposited close to the volcano.
135.7
This will affect communities living nearby, killing off their crops, damaging buildings, and impacting human health. The finer ash particles can travel thousands of kilometres if they are picked up by strong winds. This can significantly disrupt air travel, and one of the most prominent examples of this was in Iceland in 2010, when the Eyjafjallajokull eruption caused weeks of disruption to flights. Sometimes if the ash plume doesn’t have enough upward force, parts of it can collapse. This causes ash to flow down the side of the volcanoes at high speed. These are called pyroclastic flows, and consist of a mixture of hot ash and gases.
175.8
These can be devastating, as they are able to reach temperatures of up to 1,000 degrees, and speeds of up to a few hundred kilometres per hour, and destroying everything in their way. It is these same flows that caused the catastrophic events at Mount Vesuvius in 79 AD we discussed earlier. Our third volcanic material is gas. When magma nears the surface, before during an eruption, the gases that were dissolved in it are able to escape. These gases can be harmful and poisonous to humans.
205.6
This was the cause of an event at Lake Nyos in Cameroon, in 1986, when the large volume of volcanic gas made out of carbon dioxide was suddenly released from the depth of the lake, leading to the deaths of thousands of people and cattle. The release of gases can impact our climate, too. Carbon dioxide can increase the temperature of the atmosphere if it is released in huge quantities. Another particular potent volcanic gas is sulphur dioxide, as it forms fine aerosols that reflects the sunlight. Big eruptions that eject large amount of sulphur dioxide high into the atmosphere can cool the Earth’s lower atmosphere.
242.8
Secondary hazards can be triggered during or long after an eruption and are caused by the tendency of loose volcanic material like ash and blocks of cooled lava to descend down the hill. Volcanoes are being gradually built from the lava and ash that is ejected around the crater during eruptions. These materials are unstable and can collapse if they are put under too much stress or are weakened. If they collapse, they can form what are called block and ash flows. These are rock avalanches. A classic example was the 1980 eruption of Mount St. Helens in America. As the volcano grew, one side collapsed, and the removal of such huge rate on top of the shallow magma body actually initiated the eruption.
284.4
Structural collapse can cause tsunamis to be generated. Today, volcanic islands such as Stromboli or La Palma are of particular concern, because a collapse directly into the sea could generate massive tsunami waves, causing huge damage to surrounding coastal areas. Introducing water can increase these hazards, as water can mobilise large amounts of ash and debris from the surface of volcanoes. During heavy rainfalls, snowmelt events, or in the event of a natural dam failure, the amount of water released is so large and energetic that rivers quickly turns to torrents of mud and stones called lahars. These lahars can run for several tens of kilometres, destroying everything on their way.
325.8
Lahars caused by the snow melts in the wake of the 1985 Nevado del Ruiz eruption devastated the city of Armero in Colombia, causing the deaths of over 23,000 people. As you can begin to see, volcanoes present a range of complex and varied hazards. These are not simply confined to the headline grabbing lava flows that are portrayed on our TV screens. Which of these hazards were you familiar with and which of them were unexpected? We’ll have the opportunity to discuss this next. 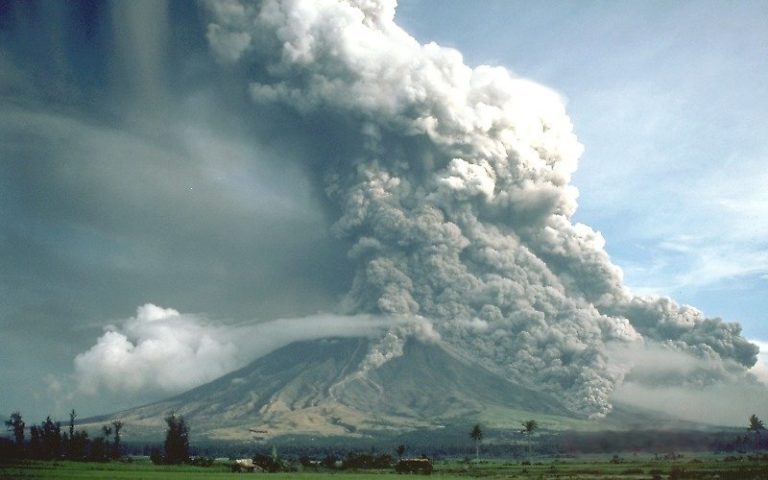