The growth of women’s football

In 1920 an unusual football match at Goodison Park drew a crowd of 53,000 to watch a star player. Which team was it - and who was the player? 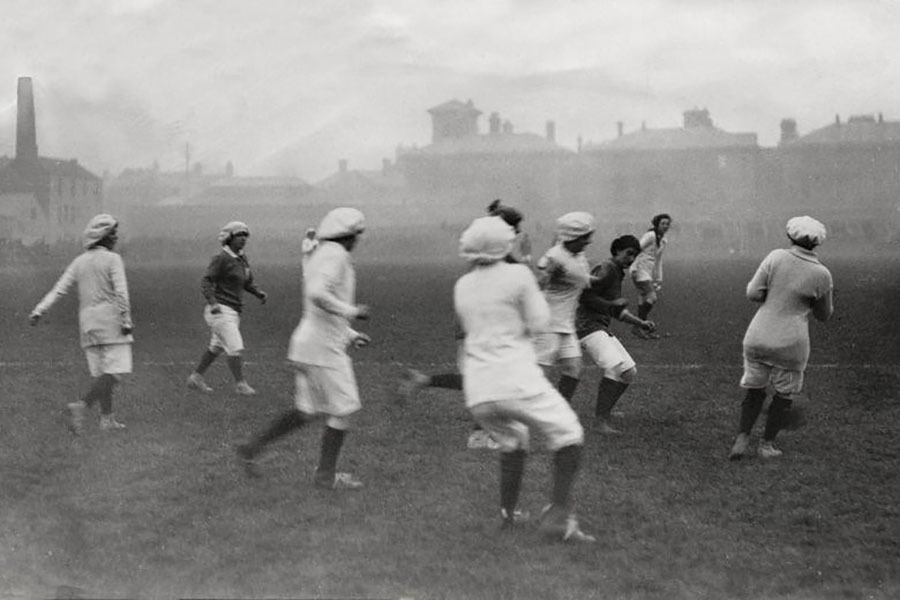 In June 1568, having abdicated and fled to England, Mary Queen of Scots is reputed to have watched a football match on a ‘playing-green’ somewhere between Carlisle Castle and the Scottish border.

But we can probably can trace the roots of modern women’s football back to 1894, with the formation of the British Ladies’ Football Club by two upper class early feminist activists, Nettie Honeyball and Lady Florence Dixie.

You can find out more about women’s early involvement in the game here.

This development was short-lived and attracted little wider support. Sport was promoted for girls only in selected schools in Britain, but contact team sports for females was generally opposed, on both medical and cultural grounds.

A revival in wartime

It was the First World War that revived interest in female football in England. With British men away fighting, women began working in local munition factories. In their leisure time they formed 150 football teams to play challenge fixtures to raise money for war charities. You can watch a short documentary about the women’s game in this period here.

The most famous women’s team at this time was Dick, Kerr’s Ladies from Preston, who included in their ranks an early female superstar, Lily Parr. In 1920 Dick, Kerr’s played St. Helens in front of a crowd of 53,000 at Goodison Park. You can see some early film of the Preston team here.

Dick, Kerr’s Ladies became internationally known, but in 1921 the FA effectively banned football for women in England by prohibiting female matches on any ground of a club registered with the FA. During the war it had been deemed ‘patriotic’ for women to play; but now the opposite seemed to be the case, as women strived for more equal rights in a number of domains.

While women’s football never completely disappeared, it remained a very minor sport in Britain for almost 50 years. National interest was renewed only when the male England team won the World Cup in 1966, an event which attracted many female TV viewers in Britain. Women’s football was reborn.