From the perspective of a forensic archaeologist, what do we do when we find human bones? What are the important questions to ask? 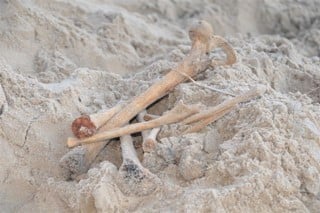 There are a range of scenarios in which members of the public encounter skeletal remains. Often when dog walking. The bones may be isolated or jumbled (disarticulated), or represent a partial or complete articulated (joints maintained) skeleton. It can be difficult to know (unless you have had training) whether the bones are human or animal. If there is uncertainty then it’s important to call the police and not to disturb or touch the bones.

When the police arrive on the scene, their first task will be to confirm whether the bones are human or animal. If the latter, then the bones are no longer of any concern to them unless they potentially cause a risk to health. If the bones are obviously animal (e.g. antlers) the police will be able to answer the question through their own training. If they are unsure, or would like an expert opinion, they will send digital pictures of the bones to a forensic anthropologist for a speedy identification. Below is one such picture sent to forensic anthropologist Tim Thompson – it is animal bone. 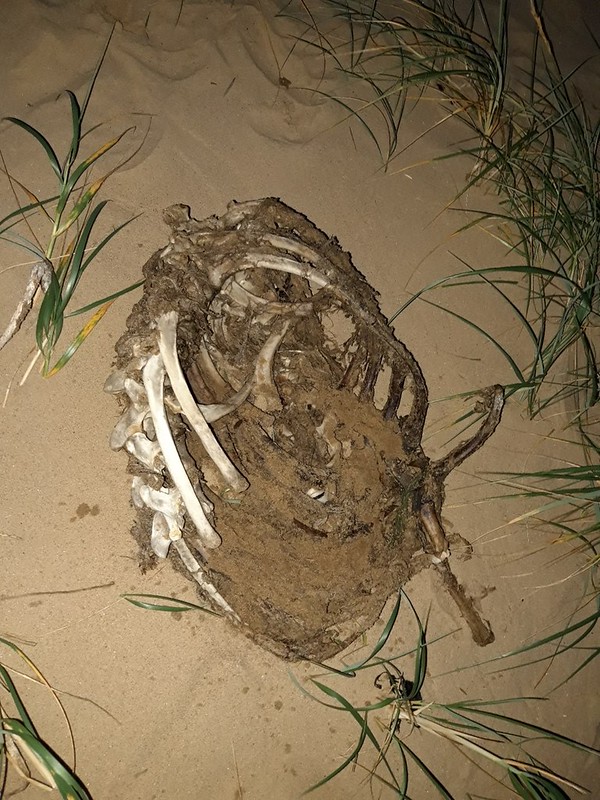 If the anthropologist cannot determine via photograph whether the bones are animal or human, or if they are confirmed as human, then they will attend the scene in person to advise on the correct processing of the site.

Encountering Human Bones: Questions to Ask and the Order to Ask them in.

The following list of questions has been adapted from John Hunter’s and Margaret Cox’s (2005) book on Forensic Archaeology.

Are the remains animal or human?

In many instances the differences between animal and human bones are quite obvious, but this isn’t always the case. For example, human infant bones are often mistaken for animal bones and vice versa. For an expert, differences in shape and size differences should make identification clear. Some species can cause problems. For example, in the photograph below, the similarities between the phalanges (finger bones) in a human finger and seal phalanges (bones in a seal flipper) are clear.

In the United States the similarity between some of the bones in a bear paw and human finger bones can also cause confusion. Sometimes people have mistaken human teeth (the molars) with loose teeth (pre-molars and molars) from a pig (see the photograph below for a picture of a pig jaw). The similarities arising from the fact that both animals are omnivores. 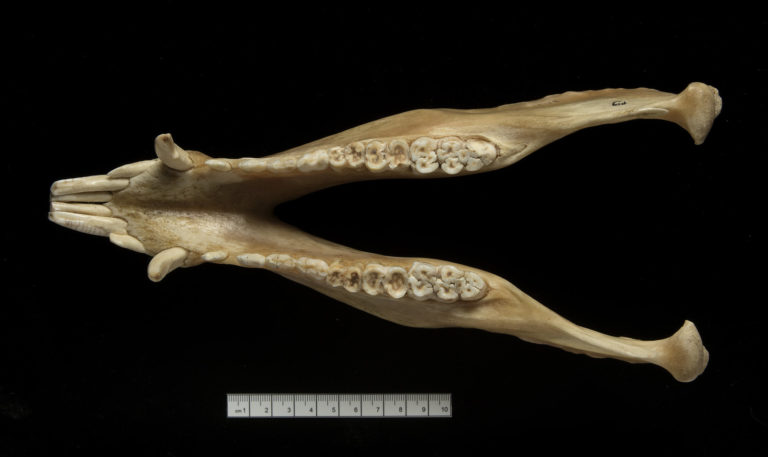 Fragmented bones may be more difficult to identify as either human or animal (see photograph of bone fragments below). In these instances, histological analysis (examine a slice of bone under the microscope to see the cells) should help to answer the question. On a more low-tech note, animal bone often has a different ‘feel’ to it than human bone. The composition of some animal bones, in terms of weight and texture, differs from human bones. For example, sometimes it has a denser cortex (outer layer). DNA evidence will also be useful should all else fail, but this is expensive and time-consuming. 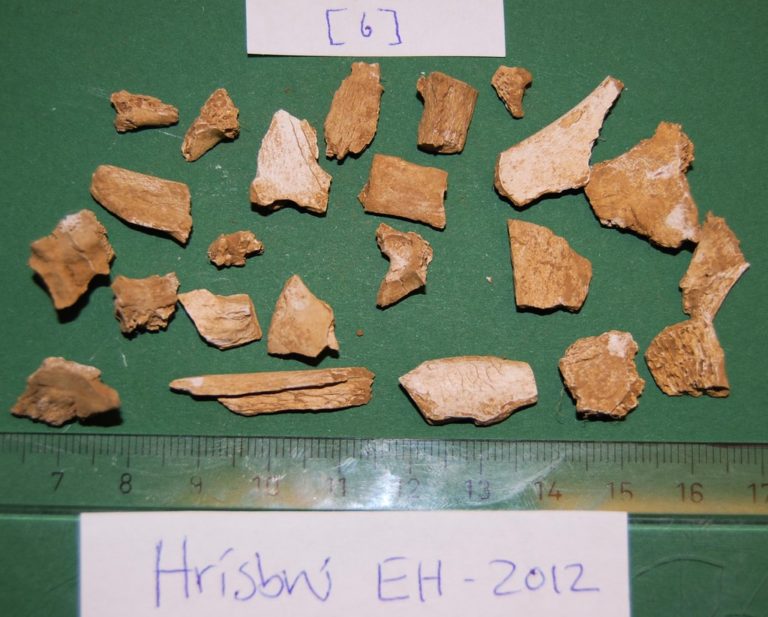 Fragmented bones are sometimes difficult to differentiate from human bone

If human, is it ancient or modern?

Features of the burial context such as stratigraphic relationships, objects in the grave, or location of the grave (e.g. association with known archaeological cemeteries) can help to establish whether it is of archaeological or forensic significance (see the picture of the Anglo-Saxon burial below). In the absence of contextual evidence (e.g. a bone washed up on a beach) then direct dating of the bones using techniques such as radiocarbon dating (widely used in archaeology) will establish whether the bone is of forensic interest (loosely defined as the last 70 years). 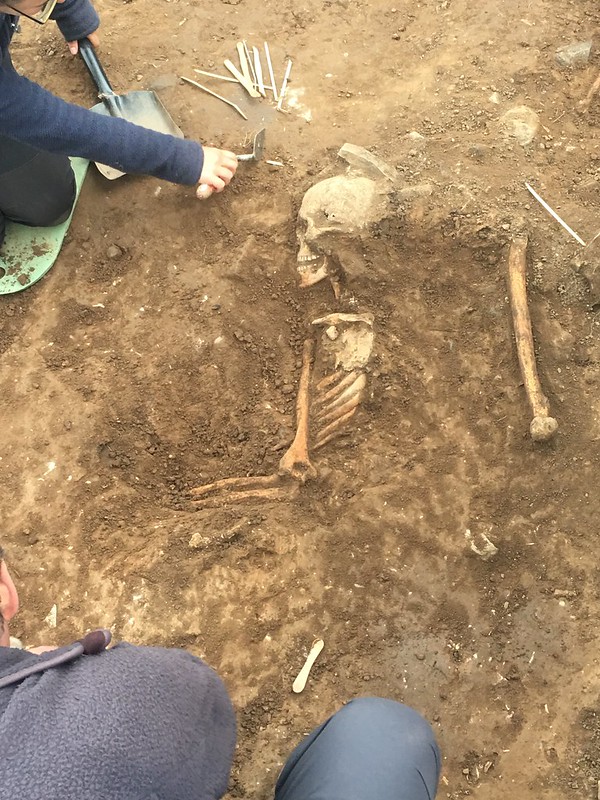 Radiocarbon dating has been used to date archaeological objects for many years. It works on the principle that living things (plants, animals and people) absorb carbon 14 (a radioactive isotope of carbon) from the atmosphere during their lifetime. After death this carbon 14 will undergo radioactive decay according to a known timetable (half-life) and this is used to deduce the time since death (see the schematic below). 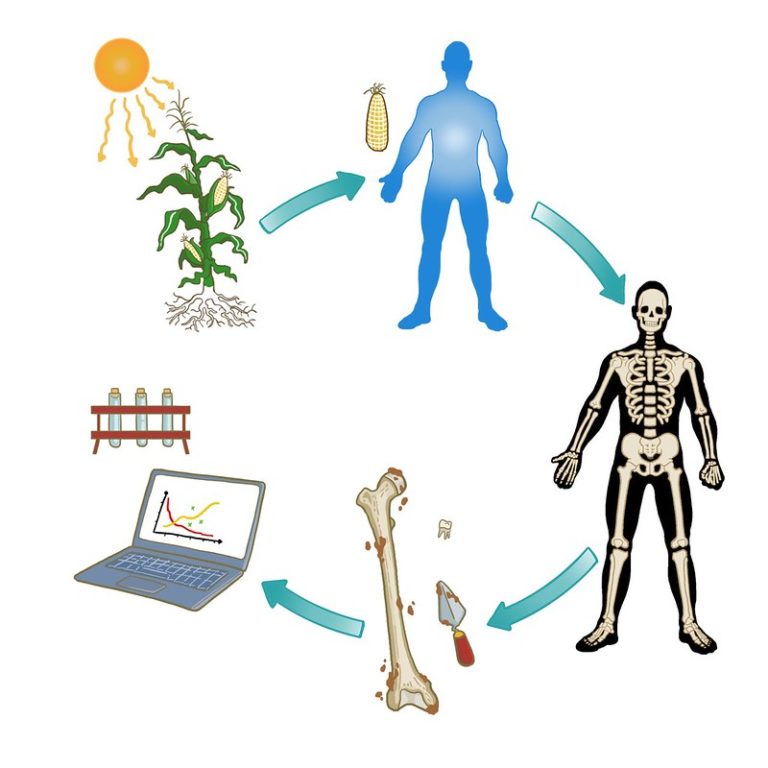 In forensic cases, radiocarbon dating can be used to test whether a human bone is ancient or modern because during the 1950’s and 60’s there was a huge spike in radiocarbon in the atmosphere due to nuclear testing. Levels have since been decreasing. These extreme changes in values mean that radiocarbon can provide a useful tool for dating forensic material with reasonable accuracy (even 1-2 years). Prior modern times, radiocarbon dating is much less precise and this fluctuates considerably.

Were the remains deliberately concealed or buried?

This is not always as clear-cut as you might think. Archaeological expertise is important for interpreting natural and cultural events relating to site formation processes. For example, was the body buried within a deliberate grave cut, implying disposal by a third party, or was it simply laying in a natural depression, which may indicate death through exposure and natural causes? Archaeological skills are important, therefore, for differentiating between criminal and natural activity, and interpreting the site.

If buried, how was the grave dug and with what implements?

Careful excavation by a forensic archaeologist can reveal the original edges of a grave cut. This is because the edges of the grave will look and feel slightly different to the soil filling it and may have a subtly different colour. It’s important that this work is undertaken by experienced archaeologists who can detect even very slight differences in the soil. The appearance of the edges of the grave can also be linked to different tools (e.g. mattock or shovel) used to construct the grave as these can leave different marks in the soil.

Are there any indications that the grave was dug in a hurry (e.g. is it too small for the body, irregular, shallow)?

If you’ve ever dug a large hole you will know that it’s hard work and takes quite a bit of time. If you’re digging a clandestine grave then you’ll want to get it done as soon as possible. Under these circumstances, a grave to dispose of a body is likely to be relatively shallow and may be irregular and too small for the body, which then has to be bent in some way in order to fit it in.

Is there evidence that the grave was left open before the body was deposited (e.g. is there blown sediment or leaves in the bottom)?

If a murder is premeditated, the assailant may do some advanced planning, which includes the digging of a grave prior to the crime. If a grave is left open for a period of time, you would expect some silt, blown-in vegetation, or other items to build up in the base and these will end up beneath the body. This is the same in larger conflict scenarios. For example, during the Balkans war some mass graves were dug using heavy machinery and left open for some time prior to the burial of bodies.

Is there evidence of the amount of time that has elapsed since the person died (post-mortem interval)?

As discussed previously, there may be a number of different ways of determining the post-mortem interval based on body decomposition, stratigraphic evidence, insect activity and so forth. The grave itself might also contain useful information. For example graves cutting through tree roots and other flora, or containing plant debris, can indicate the season in which the body was buried.

Is there evidence of transfer of material from the offender to the grave or victim (e.g. fibres from clothing), or ‘foreign’ items in the fill? 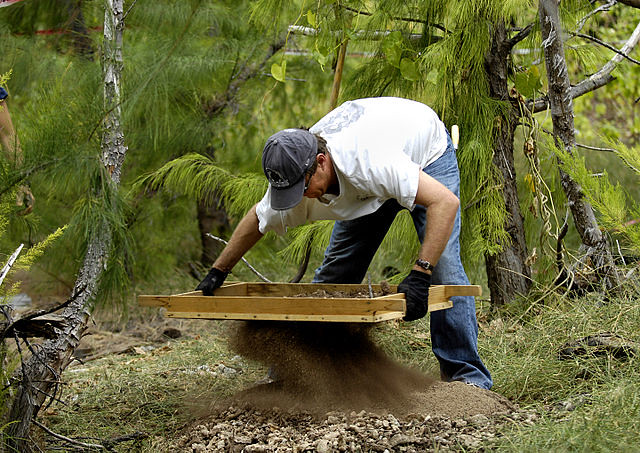 We all know from crime novels and TV programmes about trace evidence (tiny particles, or prints) and the passing of materials from one person or object onto another. Fibres from clothing, or the boot (trunk) of a car, as well as other material such as paint, glass, hair, pollen and so forth can be preserved around the body or in the fill of the grave and can provide useful evidence. John Hunter (2005) discusses a case in which green paint was found on some of the stone inclusions in a grave fill. This paint was able to be matched through chemical analysis with a spade owned by the suspect. It is important to test any personal effects found in the grave for evidence. 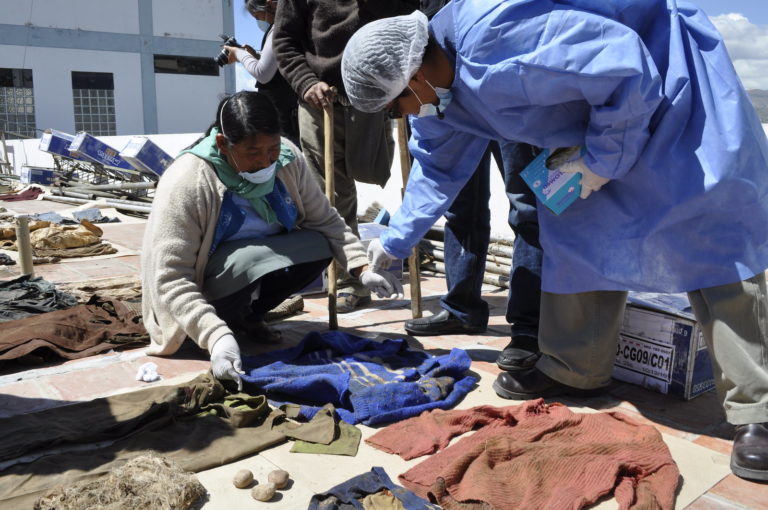 Ayacucho, Forensic Institut. With the help of the prosecutor’s office staff, families try to identify the clothes of their missing relatives. (Photographer, José Atauje, Copyright ICRC).

Who is the person and is there evidence of trauma on the body that is consistent with the cause of death? 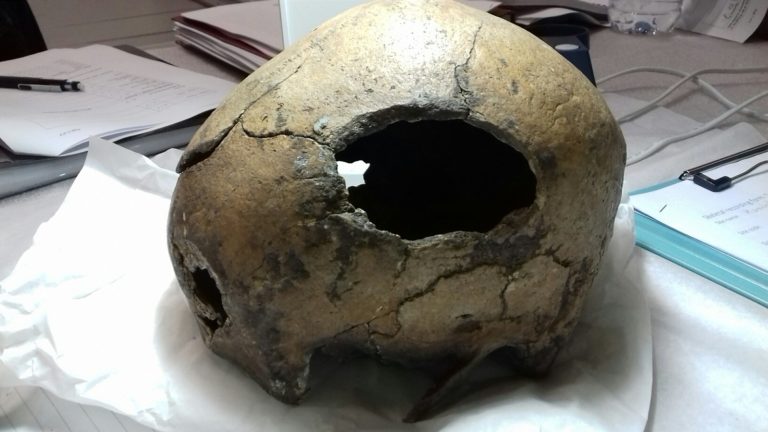 Weapon injury on an archaeological skull

Once the body is retrieved and analysed in the laboratory we want to know who the person was and whether there is any evidence of trauma consistent with the cause of death (see sharp force injury on the skulls above). In terms of establishing identity, we immediately think of DNA evidence. But this only works if you have an idea of who the victim might be and have a sample of DNA from a close family member to match it with. Without this, there are a range of other techniques to establish identification and to examine signs of trauma. We will discuss these methods in Weeks 3 and 4. 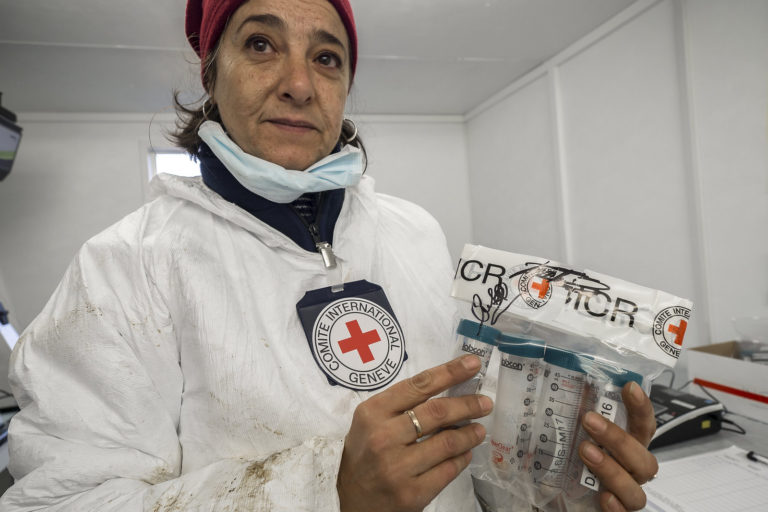 Near Darwin, Argentine military cemetery. Forensic pathologist Mercedes Salado Puerto has just sealed DNA samples into a plastic pouch which bears her signature and that of Morris Tidball-Binz, the head of the project. Their signatures on the sealed pouch served as a guarantee of the chain of custody until the samples arrived at the forensic genetics laboratories in Argentina, Spain and the United Kingdom. Mercedes worked in 2013 on the exhumation of Chilean poet Pablo Neruda. (Photographer Didier Revol, Copyright ICRC)