It is well observed that powerful lasers enable us to create high energy density materials. What happens if we continue to increase the laser intensity? And how do these high powered lasers and the plasmas we create help us to understand astrophysical phenomena? 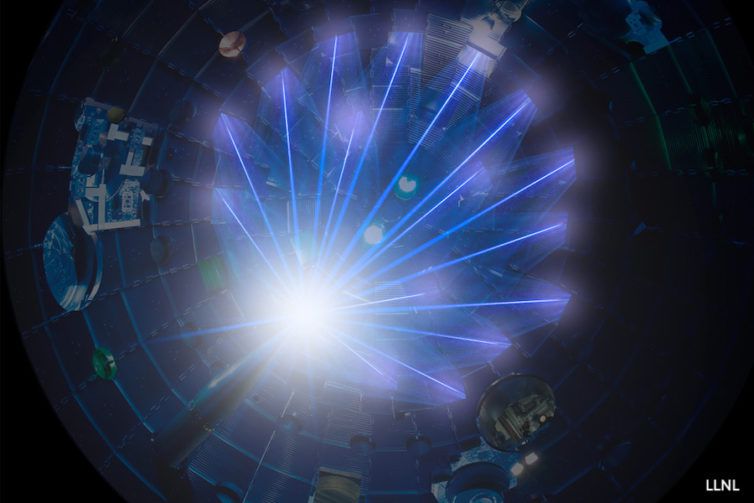 It is well observed that powerful lasers enable us to create high energy density materials. What happens if we continue to increase the laser intensity? And how do these high powered lasers and the plasmas we create help us to understand astrophysical phenomena?

The Science of Laser Intensity

At these modest laser intensities, the surface of our target is turned to plasma when hit by the lasers. This drives a shockwave into our material. A shockwave is just a sudden, strong change in the pressure and temperature of material which occurs when disturbances travel faster than the speed of sound. A familiar example is the sonic boom produced by planes as they fly at supersonic speeds. The higher the laser intensity, the stronger the shockwave, and the higher the pressure and temperature we can reach.

At intensities below 1014 W/cm2 most of our target remains solid or liquid, but the shockwave pushes it up to pressures millions of times higher than atmospheric pressure, and to temperatures of thousands of degrees Celsius. This recreates the conditions found in planetary cores.

Experiments have shown that diamond (a solid form of carbon) shares an important property with water: the solid form is less dense than the liquid. This means that on carbon rich planets with high pressure atmospheres, such as Uranus and Neptune, we might expect to see giant diamond ‘icebergs’ floating in carbon seas!

As we push still higher, above 1014 W/cm2, our shockwave is strong enough to heat the entirety of our sample into plasma. We can now explore some of the most exciting and energetic events in the universe, such as supernovae. 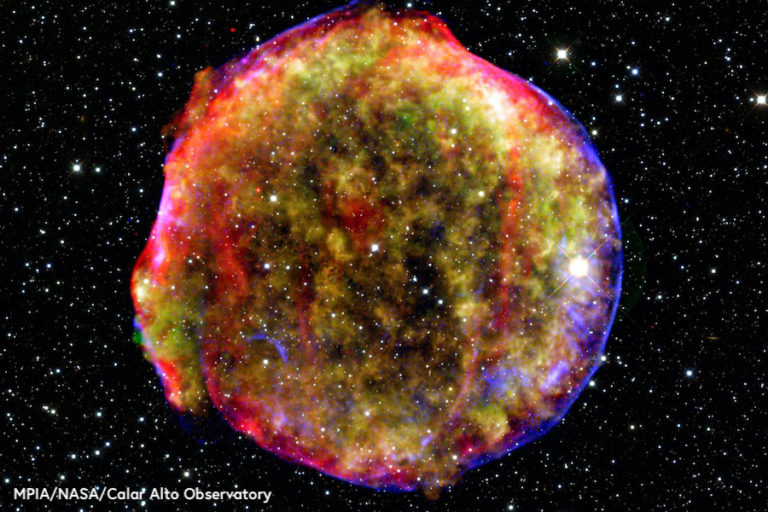 These violently exploding stars (like the one shown in the image above) leave behind shells of plasma, known as remnants, lightyears in diameter. These expand outwards for millennia. Amazingly, the same equations which explain these huge astrophysical objects apply to our tiny laser produced plasma explosions. This allows us to recreate and explore the evolution of a tiny supernova-like object in just a few billionths of a second (and in the comfort of our laboratory!). The scales are hugely different, but the two objects obey the same physics, so look and behave almost identically.

As we push up the intensity even further, we see a dramatic change in the laser interaction. To understand why, we need to note that laser light is primarily absorbed by the electrons in a material, not the ions. At low laser intensities the electrons quickly collide with the ions, sharing their energy and forming our shockwave. However, at intensities beyond 1018 W/cm2 the electrons gain so much energy from the laser that they achieve speeds close to the speed of light, and are able to stream through the sample almost unhindered. These electron beams can create many interesting effects.

For example, imagine that we hit a thin metal foil with an ultra-high intensity laser. Our electrons will be pushed out of the back of the foil. As electrons are negatively charged their removal leaves behind a positively charged foil. These two regions of opposite charge set up a very large potential difference of tens of millions of volts, and this can be used to rip protons from the foil out into the vacuum. These beams of highly energetic protons can be used for probing the kinds of astrophysical plasmas we discussed above or, as we will explore in week 3, might even be useful for cancer therapy.

Current technology allows us to reach laser intensities of up to 1022-1023 W/cm2 – so where does it end, if at all? The answer is that we think the highest laser intensity we can usefully create is around 1029 W/cm2; this is known as the Schwinger limit. At these intensities the fields of the laser pulse are so strong that we can convert the laser’s energy into mass according to Einstein’s famous equation E=mc2. A laser of this intensity fired through a perfect vacuum will create particles (typically electrons and their anti-matter equivalents, positrons) seemingly out of nowhere.

As creating these particles steals energy from the laser, this mechanism limits the intensity our laser can reach. If we try to push higher, we create more particles, which then reduces the energy in (and thus intensity of) the laser beam. It might mean that there is a limit to where we can push science with high power lasers, but ripping particles out of the vacuum is a pretty exciting end goal for us to work towards!