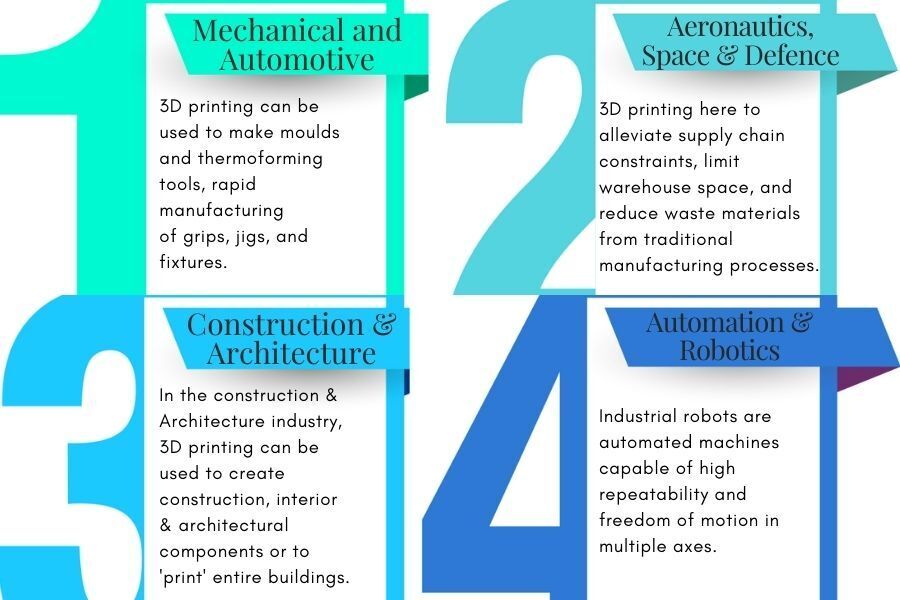 How Mechanical and Automotive industries use 3D Printing Technology?

For the past couple of decades, 3D printing in the automotive sector was primarily used by carmakers to create automotive prototypes to check their form and fit. This allowed automakers to make aesthetically pleasing components, but they were weak and couldn’t be used long.

3D printing for automotive components can be a game-changer in the industry. The Global Automotive Outlook 2017 projects that”the international automotive industry is set to reach 114 million in worldwide sales annually by 2024”. This market has very high barriers of entry as it is dominated by just a few OEMsLayout and concept of communication – High detail, smooth and accurate 3D printed scale models are very often utilized in the automotive sector to demonstrate designs and concepts of new vehicles.

The reason is simple – using CAD models alone is not powerful enough to define possible design problems. Such models can also be used for the aerodynamic testing of new versions. Prototyping – like in many other businesses, prototyping is a very important part of the manufacturing process from the automotive sector. 3D printing allows for rapid prototyping at the pre-manufacturing stage.

Using AM now is among the most popular ways to validate a prototype – from a small quickly printed detail to a high detail full-scale part acceptable for performance validation and testing. Customization- Additive manufacturing is used by automotive businesses to tailor the components to certain vehicles (making them custom and lightweight) or even drivers (e.g. seats for racing automobiles ). This is particularly useful when the price of such unique components is warranted by a significant improvement in vehicle performance.

DMLS 3D printing technologies are used for printing metal objects for defense and military equipment. Regardless of what your needs may be, out of for a drone to electrical parts to be used in a submarine, metal 3D printing can make a massive difference in military plans.

On-site production: Now, military bases can exploit 3D printing technologies to manufacture customized components and spares of military gear on-site and on-demand. Metal 3D printing makes it possible for complex military elements to be produced in no time, and be utilized on the battlefield.

Simply take the enemy by surprise! Spare parts for aging and faulty equipment can pose a headache for military operations as the original OEMs and suppliers may have closed shop. 3D printing solutions for Indian defense intends to solve this dilemma by making customizable replacement parts available on-site. 3D printed aerospace parts are becoming more and more commonplace.

Waste reduction is another attractive aspect of 3D printing technology for defense. Expensive materials like titanium can be efficiently managed and used in 3D printing, without much wastage.

How Construction and Architecture are using 3D Printing Technology?

In the construction industry, 3D printing can be used to make construction elements or to print’ entire buildings. Construction is well-suited to 3D printing as much of the information necessary to create an item will exist as a result of the design process, and the industry is already experienced in computer-aided manufacturing.

The recent development of building information modeling (BIM) in particular may facilitate greater use of 3D printing. Building 3D printing may allow quicker and more precise construction of complicated or bespoke items in addition to lowering labor costs and producing less waste. It may also enable construction to be undertaken in harsh or dangerous environments not suitable for a human workforce such as in space.

The combination of 3D printing procedures alongside industrial robots is being looked to supply a solution to the growing demand manufacturers need to make large objects on mass and with precision, while also wanting to automate the production procedure.

As 3D printing methods have developed, their integration with industrial robotics has become easier, leading to the notion of smart manufacturing. 3D printing is often utilized when producers will need to create a product accurately, quickly, and in a minimal quantity.

This has resulted in 3D printers being introduced into prototype industrial robots, helping to aid the development of better, more efficient robots in the industrial sector. With 3D printers enabling a fast turnaround time on producing bespoke components, engineers have the ability to accelerate the research and design phase, leading to new, higher quality robots being available for use much faster than they would with conventional prototyping.

In discussing the future of smart factories, the invention of 3D printers the utilize robotic arms was touched on. This in itself is a major new program of 3D printing in industrial robotics. Numerous industry players are developing different sorts of robotic arms with the capacity of performing 3D printing.